The BMW 1-Series sets new benchmarks for sheer thrills from a hatchback.

The Indian market is very new to the concept of premium hatchbacks as buyers here measure the value of a car based on its size. However BMW isn’t new to the idea of premium hatchbacks, case in point is the MINI range of cars, which are premium, sporty but not very practical. The BMW 1-Series comes and sits alongside the current MINI range but it’s armed with 5-doors and a more powerful diesel engine. Marketed as a premium compact globally, does the baby Bimmer have what it takes to capture the market in the compact car segment?

Motor Quest: The 1-Series is the successor of the 3-Series Compact which was a liftback version of the 3-Series, produced between 1993 to 2004. BMW offers the 1-Series in four body styles globally – 3 and 5-door, coupe and convertible.

Exteriors – BMW’s styling direction isn’t going to please many because the 1-Series takes heavy cues from its elder sibling, more so from the X1. Contrary to what people think, the 1-Series hasn’t evolved from the X1, it’s the other way round. The design of the 1-Series isn’t gorgeous and won’t make your jaws drop. The vehicle does look a bit odd from certain angles, the hood is too long while the rear is too simple. Many though that our red coloured test car was a modified Polo and the resemblance to the VW at the rear is very evident with the tail lights being very similar. 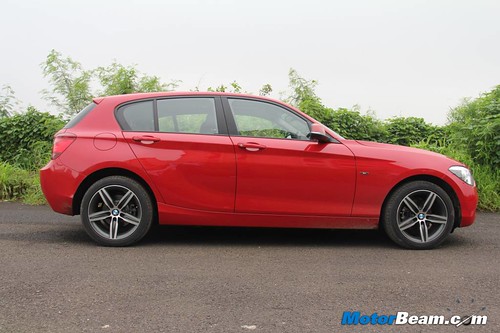 The front sports the usual kidney grille and BMW headlights which have impressive detailing. The side reveals the bold door line and relatively large glass area. The base and Sport Line variants get 16-inch wheels while the Sport Plus gets 17-inch wheels which have a very typical BMW design. So the 1-Series doesn’t score heavily on the styling front but other than the 3-Series and 6-Series, which BMW’s aesthetic appeal makes your heart skip a beat? 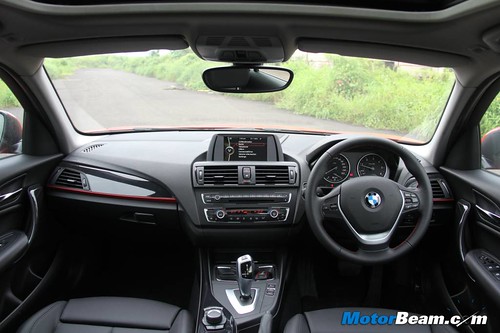 Interiors – On the inside, there is a world of a difference. The 1-Series feels very special with the cabin making you feel you are in a bigger car than a hatchback. That is because the dashboard is very reminiscent of the 3-Series. A well laid out dashboard with piano black inserts works very well. The wide centre console has a screen a top the AC vents and doesn’t feel like an after thought, looking well integrated to the dash. The joystick gear lever is always a joy to use while the steering wheel is loaded with buttons and gets silver inserts. The instrument cluster is classic BMW and the 1-Series does feel every bit as sporty as BMW projects it to be.

However one must not forget that the base 116i and 118d get very plain and basic interiors and there is no iDrive on offer there. BMW has really cut equipment on the lower variants which robs away the luxury feel from the car. Heck, there isn’t even Bluetooth and USB support, features which are standard even on the Tata Nano! The lower variants get silver inserts instead of piano black and there are no sport seats or electric adjust available either. However the seats on the top-end model are extremely supportive and offer stupendous all round support. The large glass area leads to excellent visibility too.

While the front seats are a comfortable place to be in, the same can’t be said for the rear seats. While legroom and headroom isn’t bad, it’s the large transmission tunnel which hinders a third passenger from getting in. For short journeys, two at the rear can move around in decent comfort, which is saying something for a car which is positioned towards driving. Fit and finish of this locally assembled car is excellent and everything feels well put together, just as you would expect from a BMW. The top-end Sport Plus gets a long list of equipment including rear AC vents, xenon headlights with washer, HiFi loudspeaker, etc. The boot offers generous space by hatchback standard and you can further boost practicality by flipping the rear seats forward (in 60:40 split format). 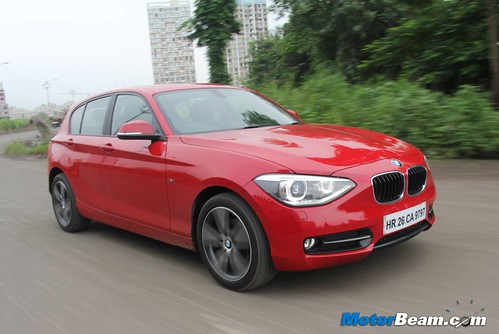 Performance – Powering the BMW 1-Series are two engines – 116i (petrol) and 118d (diesel). Our test car was the 118d which uses the same 2.0-litre diesel motor which does duty in the 3-Series and 5-Series. This mill has been detuned to output 143 HP of power and 320 Nm of torque, which is still quite generous by hatchback standards. It’s not a hot hatch per se but boy does it perform. Every input of the throttle will see the 1-Series diesel respond in urgency, moving forward with a definite urge. The motor itself is terrifically refined and is barely audible on the move, until of course you smash the throttle and a sporty note immediately erupts from the single exhaust. 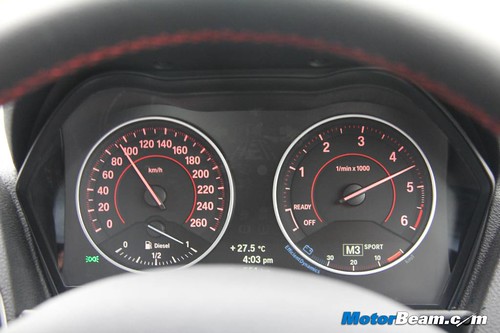 The real gem in the 1-Series’ powerplant is the 8-speed transmission, which is quick to shift cogs and gets into the right gear without any hesitance. Redline comes in at 4700 RPM and you can comfortably cruise in top gear with the tacho needle ticking at just 1500 RPM at 100 km/hr. There are 4 driving modes – ECO PRO, Comfort, Sport and Sport+; which alter the gear shift response time. The 1-Series is very fast in the last mode but a bit jerky too. It holds gears till the redline and you can manually take control of the gearbox using the tiptronic function, ironically there are no paddle shifts on the steering. When driven sanely, the BMW 1-Series will reward you with good mileage figures, stretching up to 17 km/l on the highways. The brake energy regeneration and start/stop system do help in making the car frugal.

Driving Dynamics – Every BMW has the ability of planting an instant smile on your face and the 1-Series is no different. This BMW hatchback is a hoot to drive and remains beautifully poised around the tightest of corners. The 1-Series is very eager and the chassis extremely potent (50:50 weight distribution), it simply changes direction with utmost precision. The steering wheel offers very good feedback and the drive modes alter the heaviness at the helm. Power is channelled to the rear wheels and that means you can have some fun as the 1-Series comes with a manual handbrake lever and not an electric parking brake. Grip levels are astounding thanks to the wide rubber and a plethora of safety systems. 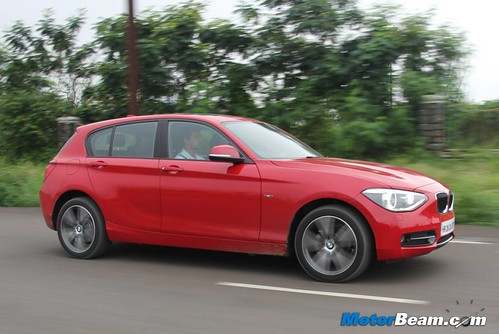 BMW cars use run-flat tyres which end up spoiling the ride quality but the 1-Series is among the best riding BMW’s around. Ride quality although on the firm side, isn’t unpleasant and it’s only the real bad roads which tend to unsettle the car. Running on 45 profile rubber, the ride quality of the 1-Series is quite pliant and the lower variants run on 55 profile tyres which should offer an even better ride experience. While the engine is very silent, the road and wind noise is audible at speed. Braking performance is excellent and the pedal offers reassuring bite and feedback. High speed stability is good but a bit of bounciness is apparent over bad roads. 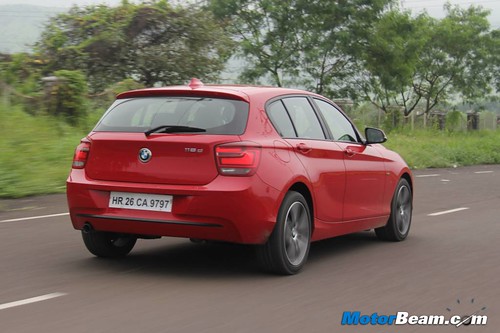 Verdict – BMW isn’t too late to the party as it’s positioning of the 1-Series is a bit different. BMW wants to lure driving enthusiasts to the 1-Series but the company has priced the car at a premium (considering it’s locally assembled). The base variants skimp on equipment you can’t imagine a BMW without, while the top trim costs as much as the 320d. The 1-Series isn’t a car which will awe you by its appearance but it will leave you spellbound as soon as you get behind the wheel. If you love driving, there is nothing at this price that offers the same levels of driver involvement as the 1-Series. Thus the Dynamic1 is a car you buy with your heart, not with your head. If you love driving and want a premium hatchback, this BMW is certainly the ONE.

The BMW 1-Series might not scintillate you with its visuals but look underneath and you are bound to appreciate the level of sharpness and accuracy on offer. 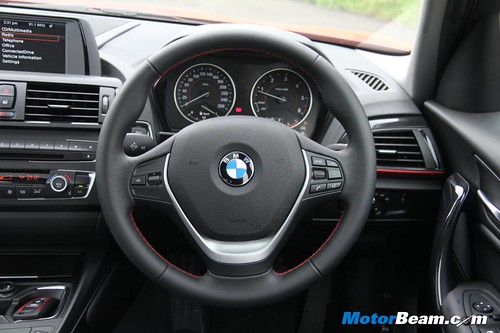 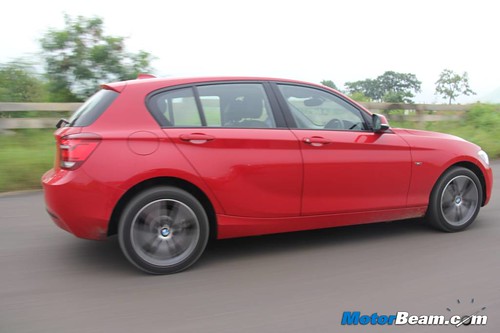 Latest BMW ‘M’ Car To Be Based On New 1-Series