It’s not a secret that the C-segment is huge with nine cars fighting it out. If I had to classify the vehicles into two categories, I would pick 8 of them and put them together, calling them jack of all trades but master of none, the one car which stands alone is a jack of all trades too but a master of some. That car is of course the Ford Fiesta which has mastered driving involvement to such a level that the second finisher in the “fun to drive” department isn’t even close. Ford cars are known to be sharp handlers yet they don’t compromise on comfort and performance. Already been with us for a long term test before, when Ford gave the Fiesta a facelift earlier this year, we just couldn’t resist to get it back, such is the car. 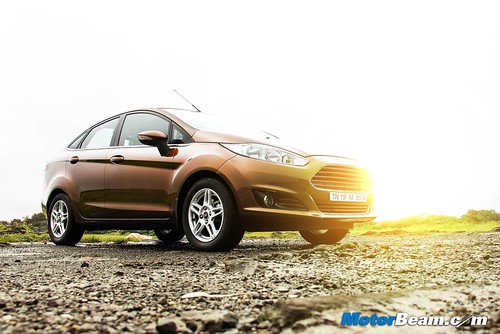 The Fiesta was quick to arrive in our long term garage as soon as Ford launched the car. Its first test was to battle it out with every other C-segment car in a mega C-segment shootout, the Fiesta finished runner up among the 8 cars which is no mean feat as its rivals are quite accomplished. The only reason for the Fiesta to not be the winner was the lack of rear seat space and no petrol engine on offer. Being the shortest car in the segment (in terms of length) with the shortest wheelbase, the Fiesta can’t be termed as a chauffeur favourite but Ford is amply clear about it, this car is not to be driven in, you ought to take to the wheel to feel the magic. So what’s so special about driving the Ford Fiesta? 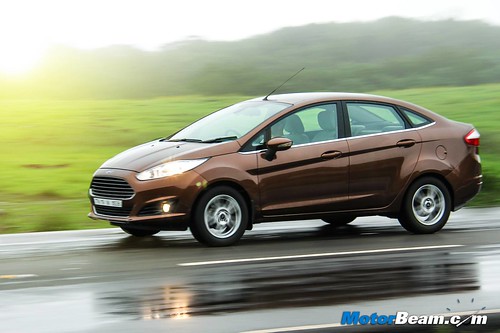 Get behind the wheel and you will understand immediately as to why enthusiasts go gaga over this vehicle. The Fiesta has one of the best steering wheels in the business and that’s despite it using an energy efficient electric unit. At low speeds, the steering is light but it weighs up terrifically well at high speeds. The car remains totally glued to the road at all times and gives you a feeling of security which its rivals from Asia can’t come close to match. To best appreciate the Fiesta, one really needs to show it a series of corners. Since the time this car has come to us, the curvy bits of Aamby Valley, near Lonavala has sort of become our second home. 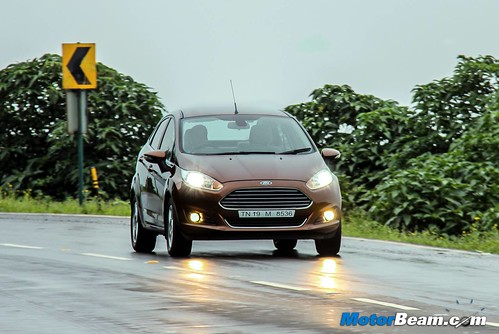 The balance of the car is surreal when you push it to its limits. The Ford Fiesta just has terrific body control, it dives into corners with such confidence that you repeat the same exercise every time but with higher entry speeds, never to be disappointed. The feedback from the steering is just right and the grip from the tyres is ample. The brakes are very powerful too and help curb speeds when you put down the anchors. Despite having fantastic handling, the ride quality is good too and this American car just glides over bad roads, it is this balance between ride and handling that’s difficult to match. 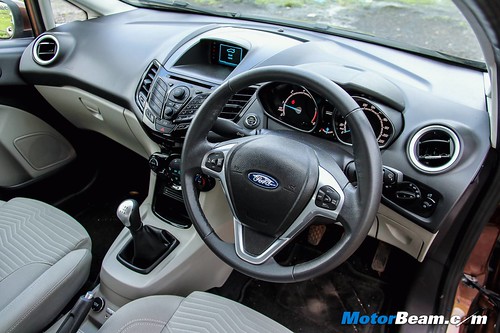 This car might just have 90 PS on tap but it never feels so. The 1.5-litre mill is smooth although it has a bit of hesitant at get go but once you get the turbo spinning at its peak, there is a strong mid-range that follows. Top-end grunt is decent and the Fiesta pulls strongly in higher gears, reaching 150 km/hr in a jiffy. The improvements in aerodynamics help this Ford hit a top whack of 190 km/hr. Low-end performance is decent which makes city driving a breeze. We have been subjecting our car to city duties a lot and quite appreciate the light clutch, slick gearbox and comfortable seats. The keyless go and push button start further add to the convenience as the car key is always stored in our pocket. 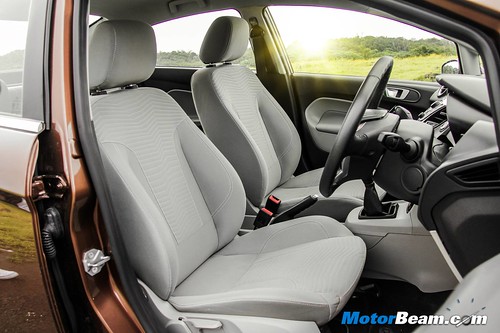 The front seats offer excellent support for long drives, notice the side bolstering

Talking about features, some of them come in handy all the time like the SYNC system which is super quick with Bluetooth pairing. We also love the automatic headlight and wiper function, they take away a lot of responsibility from us and in the whole monsoon season, the fantastic double blade wipers worked as per need, they did help a lot. A feature which should have been there would undoubtedly be auto locking doors, the EcoSport has it (locks at 30 km/hr), so why not the Fiesta? The power window controls are too far behind and not so comfortable to use, this issue isn’t there in the EcoSport which has the controls laid a bit ahead. The nice blue cluster is easy to read but shows mileage in l/100 while the EcoSport shows km/l! Horn pad is a bit hard to use and there is only one trip meter. The AC works well but internal circulation shuts off every time you shut the car. 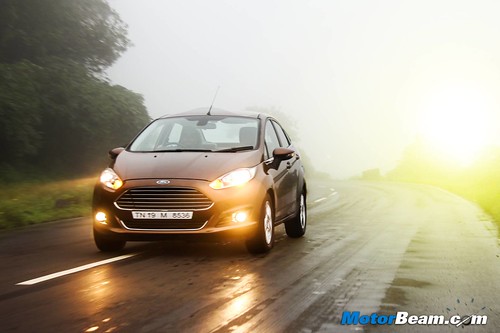 In spite of just 90 horses on tap, the Fiesta performs exceptionally well on the highway

Ford claims an improved ARAI mileage figure of 25.1 km/l on the new Fiesta. We are getting a regular mileage of 15 km/l which is excellent considering our heavy foot and the car not being serviced. We just got the vehicle serviced recently, it has got new fluids but we are yet to test the mileage of the vehicle. While we can’t appreciate the freshness on the inside (under the hood) caused by the service, we do continue to love the Aston Martin inspired front-end which also draws a lot of attention on our roads. 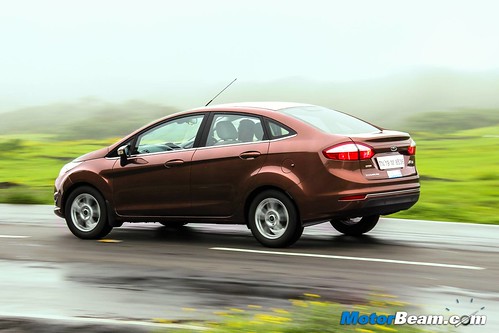 Driving the Fiesta daily can really spoil you, nothing else seems as nice to drive

Our long term Ford Fiesta has kept us all excited but the car does make you feel a bit spoilt. You see, after driving the Fiesta on a daily basis, everything else appears inferior when it comes to driving pleasure. The Fiesta’s driving manners are so immaculate that forget cars of the same segment matching it, even vehicle in two segments above can’t offer you this level of fun and cornering precision. Aptly positioned as the car for those who love driving, the Ford Fiesta is a vehicle which pulls your heart strings the moment you look at it, managing to keep you connected while driving and also making you standout against the herd. Now you know why I would keep the Fiesta separate from the 8 other cars in the C-segment! 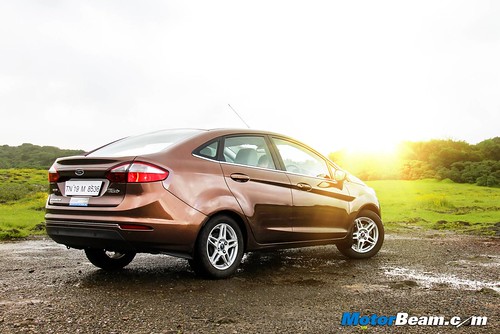 Other than rear seat space, there is not much to fault with the fantastic Fiesta

Ford Starts Development Of Next Gen Fiesta, Codenamed B500

Ford Fiesta Is UK’s Best Selling Car Of All Time