The 2014 Hyundai Verna gets improved driving dynamics along with other changes.

Hyundai launched the new generation Verna in mid-2011, which climbed up the sales chart within no time and is the segment leader today. This C-segment sedan has some fancy tricks up its sleeves that are bound to attract buyers. Hyundai has launched the updated Verna for the 2014 model year recently. Now, you must be thinking why they have released an update of the already attractive Verna. Yes, there are slight cosmetic changes but hold on. The talking point here is the driving dynamics of the Hyundai Verna, which was not appreciated much by the owners of the outgoing model. On that account, Hyundai has updated the Verna based on customer feedback to improve the suspension and handling of the car. Before we begin the review, we must tell you that we have lived with the pre-updated fluidic Hyundai Verna since its launch in India, having done more than 50,000 kms in it.

Projector headlights with DRLs makes the front more aggressive, no changes at the rear except for the badging

Exteriors – The Verna has been around for quite a while now but still manages to attract many eyes with its fluidic design that makes it the most stylish car in its segment today. Walk around the Hyundai Verna and you will appreciate the attention to detail. It looks well proportioned from all angles. The visual changes are not drastic on the 2014 Verna but the subtle updates make it look sharper. The already aggressive front face now gets meaner with the new set of projector headlamps integrating daytime running LED lights. 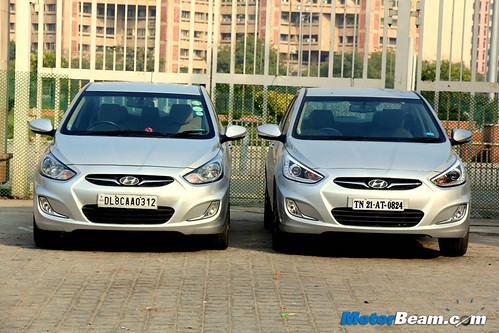 The side profile of the updated Hyundai Verna reveals a new set of diamond cut (as Hyundai likes to call it) alloy wheels that look sharp and intense. The previous one’s alloy wheels were not bad either but the new ones grab attention instantly. Apart from the alloys, there are no changes on the side profile. The rear section is untouched, save for the revised badging. ‘HYUNDAI’ badging at the rear has gone now and it only reads ‘Verna 1.6 SX’. We also noticed a slight increase in the ground clearance. 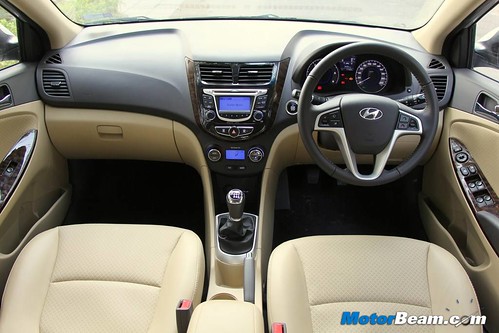 The Verna has welcoming interiors offering excellent convenience and comfort

Interiors – The changes on the interiors are subtle as well, just like the exteriors. The window switches and the steering mounted controls are now illuminated that adds to the convenience while driving in the dark. Another minuscule change we observed on the new Hyundai Verna was that the outside temperature is now displayed on the automatic climate control panel screen instead of the MID situated on the instrument cluster. The automatic headlight control for the projector lamp is on the right stalk that works really well.

The rear seats are supportive but positioned low, rear middle headrest has been removed on the 2014 Verna

Hyundai has removed one headrest from the rear middle passenger seat. Another cost saving measure is seen under the boot. The updated Hyundai Verna now comes with a steel rim for the spare tyre unlike the previous model that came with a spare alloy wheel. Auto speed sensing door lock feature was missing as well as side and curtain airbags but these two features have now been revised recently alongside the launch of the Verna CX variant.

Most of the buttons and controls are now backlit, notice the steel rim for the spare tyre for cost cutting

So, there are some omissions and additions on the updated Verna but overall the interiors offer excellent convenience and comfort on the go. The tastefully used colour tones give a sense of roominess and the seats are supportive as well. However, the rear bench positioning is slightly low and with the high window line, it becomes a bit uncomfortable for some. The interior quality seems top notch with soft touch plastics and well put together panels. 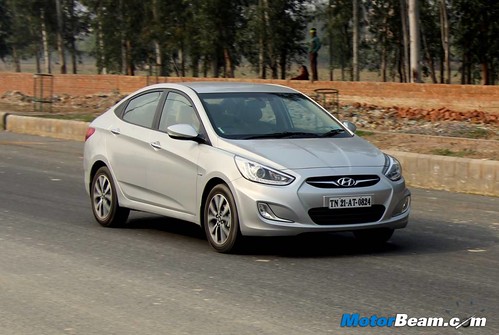 Performance – The Hyundai Verna is offered with a wide range of petrol and diesel engine options. It comes with 1.4-litre (petrol/diesel) and 1.6-litre (petrol/diesel) engines. The 1.6-litre petrol engine has a good low and mid range grunt that makes the car shoot into gaps precisely. The top range feels strained though and gets noisy if you play enthusiastically. Our test car was the 1.6 diesel. The oil burner doesn’t feel as quick as its petrol counterpart in its low and mid range but compared to its diesel rivals in the market, it is one of the quickest engines.

There is only a hair’s breadth of turbolag, thus it is quite practical while ambling around the city in congested traffic conditions. The interesting character of this diesel engine is that it has a continual and linear power delivery unlike many diesel engines. It picks up gradually from the word go and the pace really gets exciting mid-range onwards. The 1.6-litre diesel also revs freely so the top range feels butter smooth while you are enjoying the stupendous acceleration. The NVH levels are impressive and the diesel clatter hardly penetrates inside the cabin. 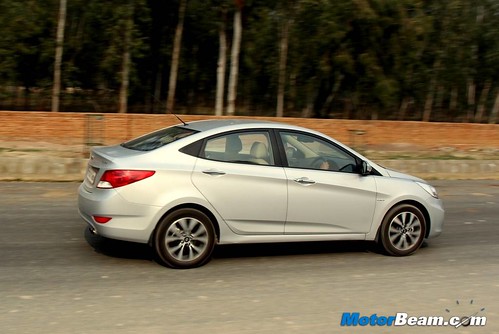 The 1.6-litre diesel unit is one of the quickest engines in its segment

Mated to the 1.6-litre diesel motor is a 6-speed manual gearbox. The transmission setup is quite easy to use in city traffic, as the shifts are slick and short along with a light clutch that has no play at all. The well spaced out ratios and minimal turbolag doesn’t need frequent gear shifts. Out on the highway, the diesel Verna never feels breathless. It has enough top range punch for quick overtaking. The additional long legged sixth gear makes it a breeze to cruise on the highway at steady speeds. The oil burner returns an average fuel economy of 14 km/l. 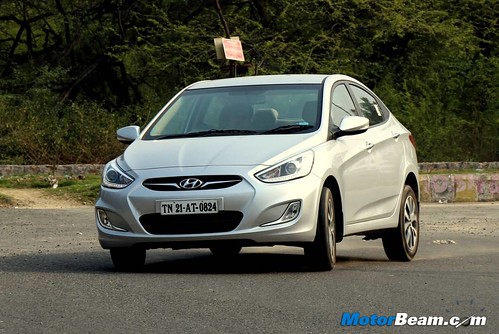 Driving Dynamics – This is the most talked about and a very sensitive department whenever there is a discussion on the Hyundai Verna. The suspension and handling characteristics of the Verna were bothersome. Yes, you have read that right, “were bothersome” because now, Hyundai has reworked the suspension to a great extent on the updated Verna based on customer feedback. The suspension setup is now stiffer, which is slightly evident at slow speeds but that stiffness has added some confidence at high speeds. 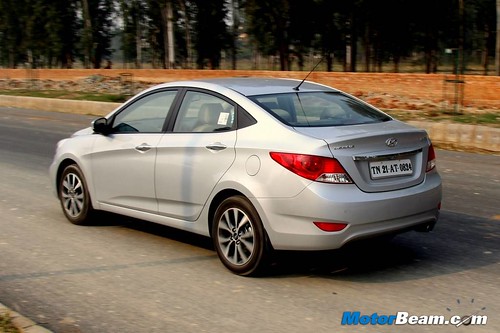 Verna’s high speed stability has improved to a good extent

With a stiffer suspension, the Verna’s high speed stability has improved and it is relatively less bouncy at the rear. The rear section of the Verna had a tendency to get unsettled on sharp potholes, which seems to be over now. The stiffness helps the car to maintain its line. In terms of handling, the improvement is not drastic but apparent to those who are used to driving the previous Verna. The steering feedback was dead at the centre, which is now sensitive that adds to the confidence. Disc brakes at all four corners offer good braking performance. 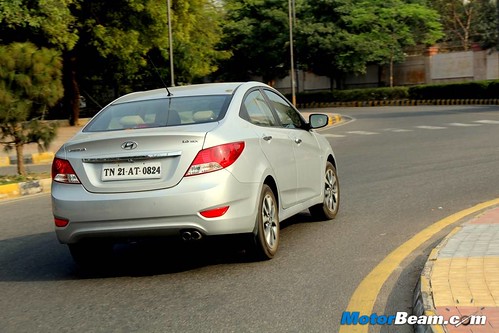 Despite the improved suspension, the Verna doesn’t inspire confidence while cornering

However, the Hyundai Verna still isn’t engaging to drive and compared to its European rivals, the dynamics are not up to the mark. The suspension lacks that nerve you need at high speeds on Indian highways. Also, you won’t enjoy throwing the Verna enthusiastically on a set of winding roads. We observed a nifty increase in ground clearance and took it to the bumps that scraped the outgoing Verna’s underbelly. Surprisingly, the new Verna went through without kissing them. 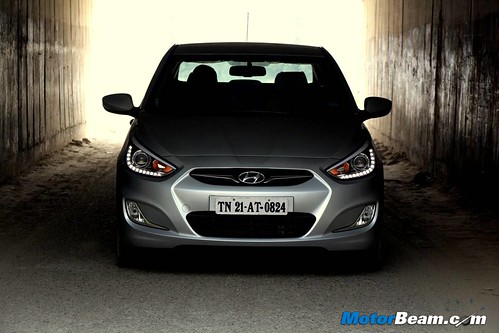 Verdict – The Hyundai Verna holds its own when it comes to the value for money proposition in the market and with the updates, the 2014 Verna comes across as a desirable package. The improvement is apparent when compared nick and tuck with the outgoing model. Still, the Verna can’t lure enthusiasts despite the improved dynamics. Nonetheless, we appreciate the updates Hyundai has thrown in, which make the 2014 Verna a reliable pick for those who were concerned about the suspension and handling.

The 2014 Hyundai Verna comes with minimal cosmetic updates but the suspension and handling has been improved for better driving dynamics and road holding. 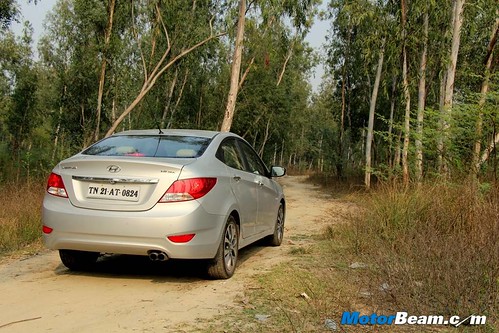 * Still not as engaging to drive as rivals