Located in the heart of Karnataka, Sakleshpur is a small hill station surrounded by mesmerising landscapes of green hills with coffee and tea plantations, while the forests are home to the wild. Thought the ice bucket challenge is tough? Wait till you try taking a bath in cold water here on a daily basis. With the perfect setting comprising a challenging terrain, water streams, mud and slush; winding roads and steep gradients, Sakleshpur is nothing short of nirvana for off-roaders. So when Mahindra came back this year for the 2014 edition of the Great Escape, this was something MotoBeam was looking forward to. 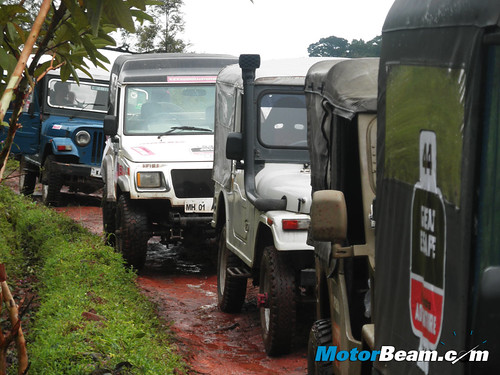 Divided into two days, the 2014 Mahindra Great Escape in association with Maxxis tyres was held at the very beautiful Kadamane Estate that is home to 13,000 acre property of tea gardens, hills, streams and parts of the forest. The first day was a free ride event concentrated towards having fun. The day saw close to 70 Mahindra vehicles take part in conquering the 20 km long trail that was pre-planned by Mahindra Adventure team and also turned out to be one of the biggest ensembles of Thars, Scorpios, Boleros, Invaders and Classics, as well as old school CJ-540s, Major and a pristine original Willy’s, most customised to make it to new roads. 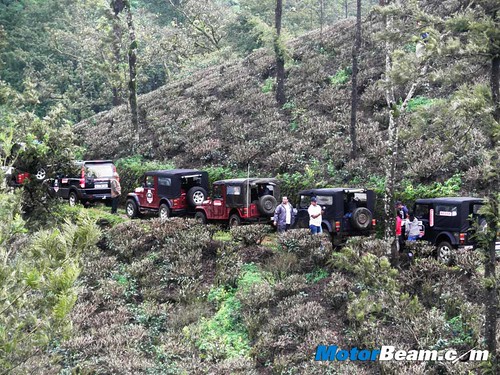 With registration, breakfast and a small briefing on the do’s and don’ts completed by 10 AM, the drive was flagged off at around 10.30 AM and we were promised 20 kms of mud, soil and extremely challenging trail. Given the muddy terrain, most vehicles were equipped with Mud Tyres (MT), while some participants were riding on AT stock units. Nonetheless, the recovery vehicles were always on standby to help out anyone who got stuck. The 20 km long trail took us around 7 hours to complete. 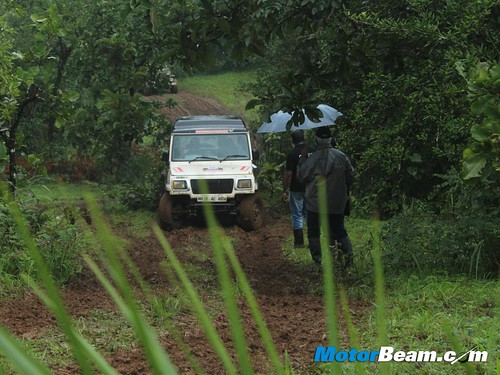 Our drive for the day was the old school Mahindra Invader that came equipped with the 2.5-litre DI diesel motor from the Bolero. With a short wheelbase and the absence of the front bumper, the Invader turned out to be one of the best vehicles for off-roading, especially with impressive torque output that made sure we always gained momentum across the gruelling trail. The Invader also came equipped with MT tyres from Maxxis that did not lose out on traction during the slush filled trail. 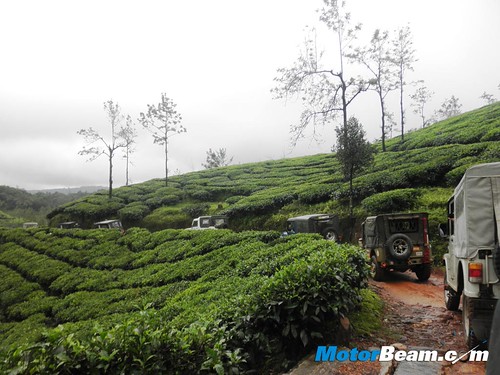 An ensemble of Thar, Scorpio, Jeep, Bolero and Invader drove through the tea gardens

The first leg of the drive saw us cross through the gravel stretch surrounded by the tea gardens. We simply pushed the 4WD unit into 2-High (2H) and followed other vehicles on the road. Simple and effective, the narrow bends made sure we did not speed up and rather enjoy the scenic surroundings instead. Nonetheless, the gravel road led us inside the forest where the real escape was waiting to taste blood (more on that later). 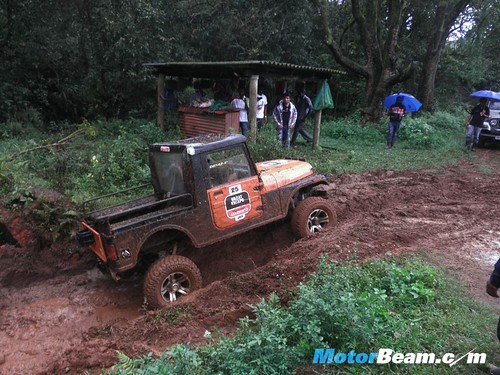 The first obstacle was wading through a flowing stream. Not as easy as it may appear, the mud and sludge made sure that the Jeeps do not climb out of this section. While most vehicles lost out to the sludge and some chose to avoid it completely, there were a brave few who conquered the trail, albeit after countless attempts. However, the obstacle meant that all vehicles behind had to stop until the 4×4 in front crossed over, which meant hours of waiting. Nonetheless, the other off-roaders were here to have fun and made sure to cheer the ones who opted for the obstacles. 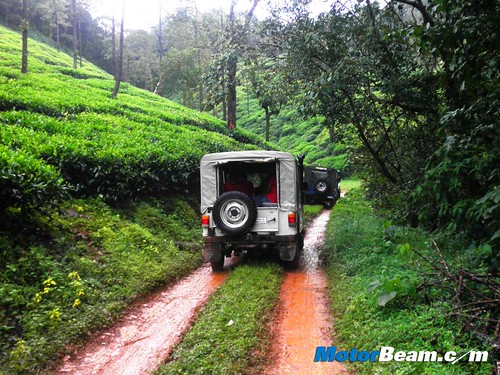 The Borgwarner four-wheel drive system was effective to gain traction

As we entered the forest section, mud and sludge and the loss of traction that welcomed us, we were quick to change the Borgwarner 4WD system into 4-Low (4L). It does take some effort but we could see a world of a difference with the 4L engaged. It was not only easier to cut through the slush, but also made climbing steep gradients rather convenient. However, one thing that caught us by surprise was the steering wheel that was hard to tame, especially since it was a manual unit. Nonetheless, it made us very alert at all times considering it back fired without notice. 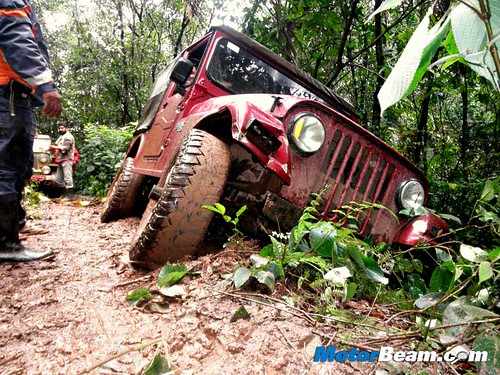 Clearing obstacles and few mishaps made sure of long waiting hours

Being a narrow trail, following other vehicles was the only option and a few mishaps along the way made sure that delays were caused even further. However, no one was hurt during the entire trail and Mahindra’s recovery team was quick to help out the fallen, using winches and tow ropes to get the stuck vehicles out. Some Jeeps also stopped because of burnt clutches, something we were aware of and made sure not to half ride the clutch at any occasion. 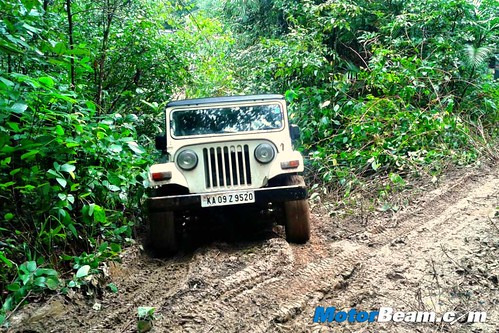 A large part of the drive was through the forests. Although not enchanted, the dense portions of green land saw us fight it out with broken trees, hanging branches, narrow trails and lots and lots of ‘blood’ sucking leeches. We were advised to look out for leeches on our feet regularly, since you wouldn’t feel them even if they bite you (make sure you invest in gum boots before you head up here). We also had to make sure that the windows were rolled up throughout most of the forest area, especially after getting bitch slapped by hanging branches. 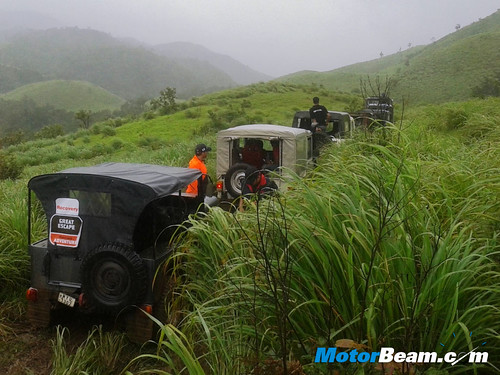 As we found our way outside the forest, we were greeted with some truly beautiful locations on the hill top. It was breezy and the regular drizzles from the morning had turned into torrential rains that only added to the fun. The trail was full of slush and the gradient was steep. Nonetheless, the Invader’s impressive torque and the MT tyres made it less of a hard work to climb the incline. Surrounded by lemon grass, we even used the green pastures to gain some traction to reach the top, which was then followed by a steep trail to the bottom. This also meant that we put all our skills to test while going back down and made sure to not lose traction at any given point of time. 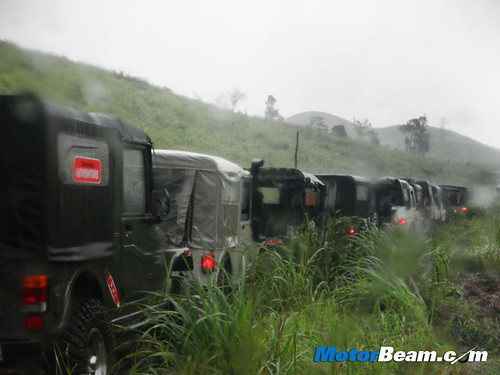 The rains only added to the fun of the Great Escape

The last leg saw us back on the gravel roads crossing through the tea gardens. Most of the vehicles had sped their way through the gravel, however the rains had picked up speed by now along with increasing fog and visibility was turning into a big issue. Speeding up was not the option for us, also the gravel road made for a horrible ride quality. But after 7 hours of a challenging drive, we couldn’t wait to head back for a late lunch and decided to floor the throttle, in controlled limits of course. 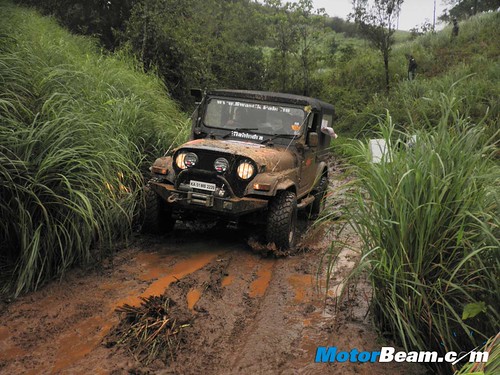 The 2014 Mahindra Great Escape Sakleshpur concluded successfully and as we headed back to the briefing room covered in soil, mud and what not, we could see a huge grin on the face of every participant. We also found a surprise package in the form of the Invader that was loyal throughout the drive. Comprising of experienced as well as beginners, the sentiment shared was likewise by all of conquering the trail and coming back with a preserved car. We too did a small victory dance for accomplishing the trail and prepared for the off-roading trophy that was planned for the second day. 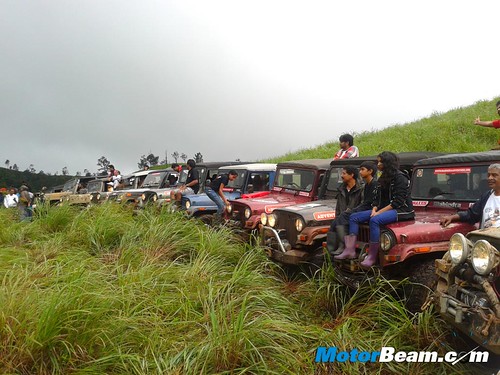 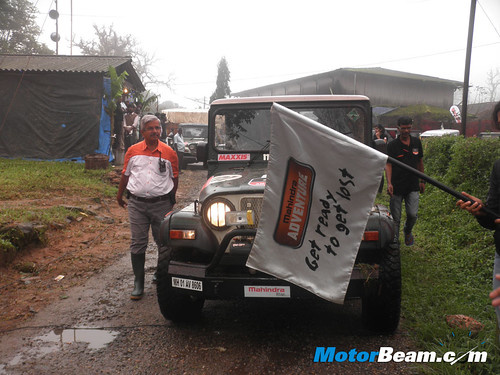 Day 2 saw a total of 15 participants come and take part in some serious off-roading, wherein the participants would have their vehicles and off-roading skills judged while accomplishing the planned obstacles. There were four positions to fight for and the regional winners would be competing in the finals at Igatpuri next year for the grand prize of a brand new Mahindra Thar. 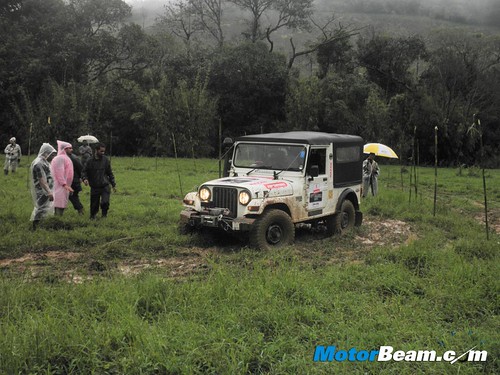 The cars had to complete the trail while driving in reverse

The participants were briefed about the rules and regulations; the event was flagged off and took the gravel road once again toward the first obstacle. The first obstacle saw participants drive backwards through a pre-planned track without hitting the poles, which would attract penalties. A time based task, the participants had to clear the track in the shortest time possible, while in reverse. With a driver and spotter in every 4×4, we really saw some very good driving skills put to test, but with every passing vehicle, the trail was getting even more difficult to cross and some vehicles even had to be winched out after getting stuck. 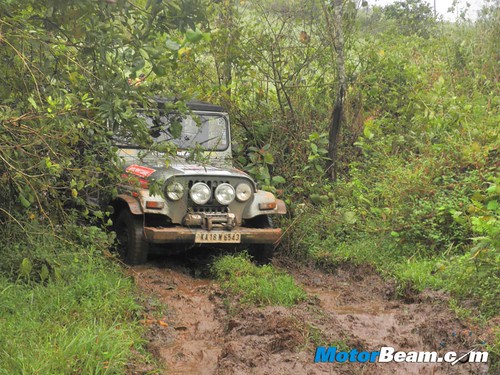 The slush made controlling the cars on the decline difficult

The next obstacle saw participants drive down a decline. Participants were judged here based on their controlling skills for the vehicles as well as the approach towards the incline and decline, while the last part saw a slush filled trail that needed lots of traction to conquer. A rather simple task, all vehicles made it through this obstacle with relative ease. 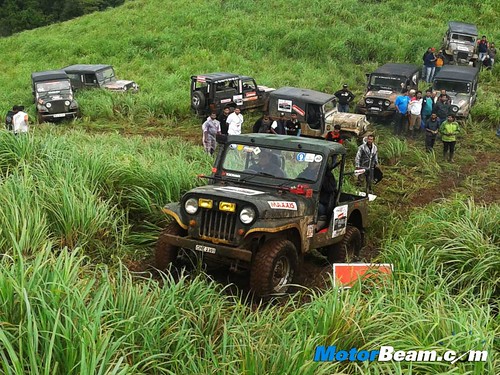 Mahindra managed to save the best for the second last obstacle. The participants were asked to drive on a very steep incline and reach the top that would put all the skills to test along with the life of the clutch under scrutiny. Unfortunately, the drive wasn’t a straight one and involved a speed breaker in between that was there to break the momentum. 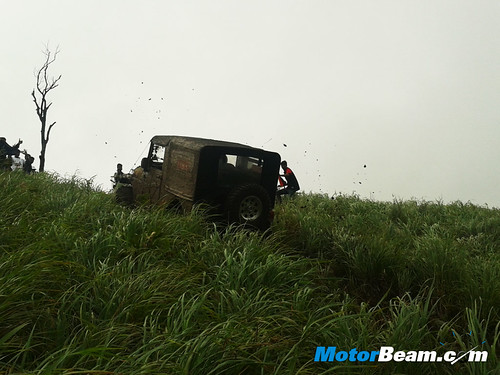 Almost there, but couldn’t make it

Every participant was given two attempts to try out and we saw some accomplish the task making it look like a cake walk, while the others floundered miserably. It was exciting though, especially when vehicles reached almost at the top and couldn’t make it all the way by a just a tiny margin. Nonetheless, the emotions were at an all time high and cheers only got louder for the participants on every attempt. 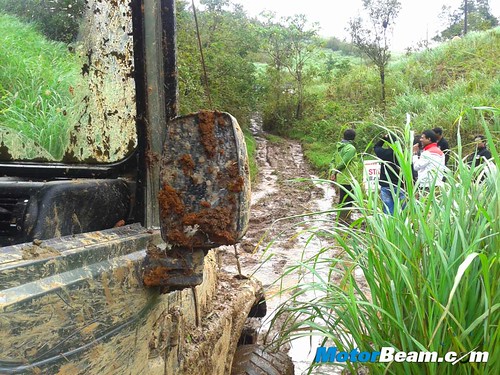 The last obstacle saw us go back to the trail of the second obstacle but in a reverse order. Participants were asked to climb the incline this time, which was steep and took some effort to accomplish. Once again, the driver abilities and vehicle control made all the difference here. Being the last obstacle we too decided to try it out, but failed after two very hard attempts only to realise the true difficulty levels the obstacle had put forward. 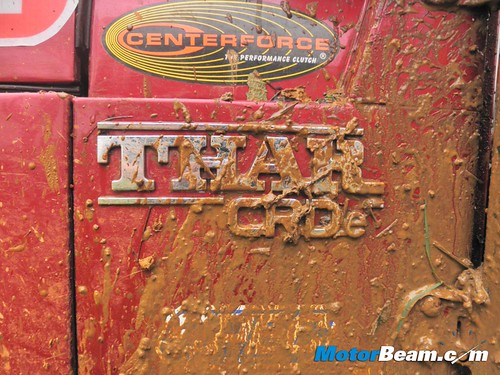 The participants were judged based on various factors such as completion of the obstacle, vehicle preservation, driver skills and external help taken. While at the end of the event, there were four glorious winners, no body went home as a loser. There were new skills learnt that one can boast off at the next event and definitely more friends made. As for the vehicles, the Mahindra 4x4s were put to some really painstaking tasks and managed to conquer every challenge with ease. A constant learning experience, off-roading is not for the faint hearted and will definitely leave you asking for more like we are now, until then. 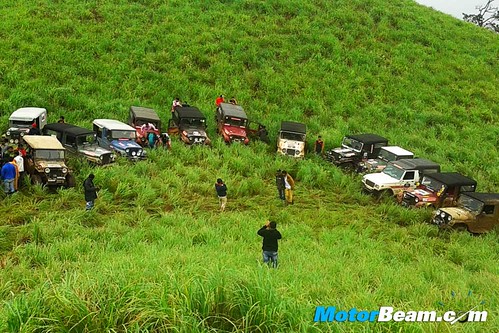