Affordable European motorcycles was an alien concept not only in India but in Europe as well but times have changed and how! Who would have thought that such a day would come but it is India’s Bajaj Auto’s massive stake in Austria’s KTM and the purchase of Benelli by China’s Qianjiang Group which has resulted in these big brands coming in the grasp of many bikers who earlier only dreamt of ogling at such machines on screen, let alone riding or owning one. The most affordable Benelli in India will be the TNT 300 and we had to get astride one to see if the entry level, engineered in Pesaro motorcycle has what it takes to lure enthusiasts.

Motor Quest: Benelli is one of the oldest motorcycle brands in the world and the Chinese owned Italian company launched the TNT 300 in 2014. This motorcycle is called the BN 302 in most markets where it is sold while in India, DSK Motowheels has chosen to go with the TNT 300 name. 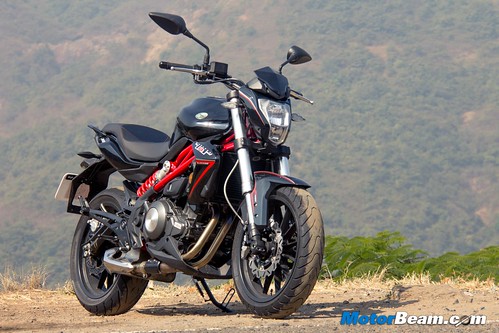 The Benelli TNT 300 is a bike with generous dimensions, it’s quite big in size

Styling – The Benelli TNT 300 is a smart looking motorcycle and the colour combination just works so well that many would mistake it to be a Ducati from far. That’s because the TNT 300 has a red coloured Trellis frame. The design isn’t sporty but is a mix of street-fighter elegance with modern bits. The hardware on this bike will truly wow you over and that includes daytime running light equipped headlight, LED tail light which has a crystal effect, upside down front forks, double front wave discs, offset rear monoshock, underbelly exhaust, multi thin spoke alloy wheels, LED indicators, leaf shaped mirrors, single piece seat with red stitching and fattest in the segment Pirelli rubber. 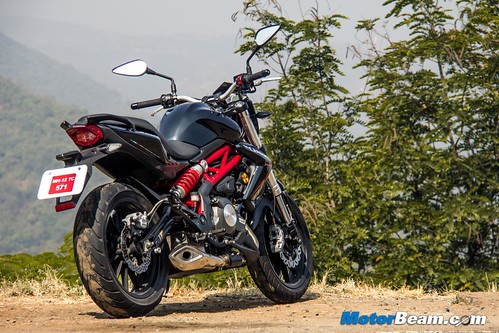 There are other interesting bits too, the Benelli TNT 300 having a meaty tank with the Italian flag on it, split chunky grab rails and “Pura Passione Dal 1911” (which is Pure Passion Since 1911 in Italian) written on the panels below the grab rails. In fact, a close look at the motorcycle and you will realise there are a lot of badges, like the Benelli logo on either sides of the tank, “royal line age” written on the front mudguard, TNT and BJ300GS written on the protruding body panel below the tank (side reflectors next to it), 300 logo near the grab rails, yet all of it looks neat and not overdone. There are red and white graphics too but again very subtle and all that adds up to a good looking motorcycle with a purposeful stance. The side profile reveals the red graphics on the under tank panel meeting the mudguard graphics in a smooth flow. Quality is top notch too and there are no rough edges. 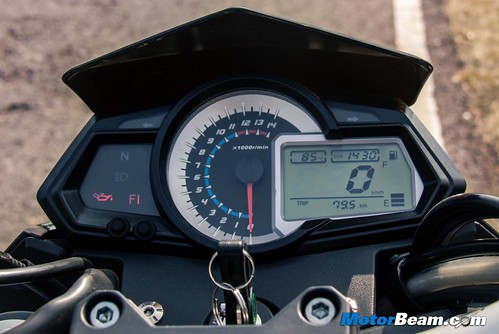 Instrument Cluster and Switchgear – Like all other Benelli bikes, the TNT 300 too gets a flip to open key which is the coolest key in this class of motorcycles. The instrument cluster is an analogue digital unit. It’s quite similar to other Benellis too but the font and design of the tachometer isn’t very striking and feels a bit dated. That said, the large display has big fonts with speedometer taking cenre stage. The four important meters are right there – fuel, odo, trip and temperature. There is also a clock but disappointingly there is only one trip meter. There are two buttons, the left one for toggling between odo and trip (also reset for trip) while the right one is for toggling the reading between kms and miles. Tell tale lights are placed on the left most and include the usual Neutral, high beam, FI and engine warning icons. Solitary indicator display is on either side at the top. Switch gear quality is good with the bike getting a hazard light button. The horn is a bit lacking in terms of db output. 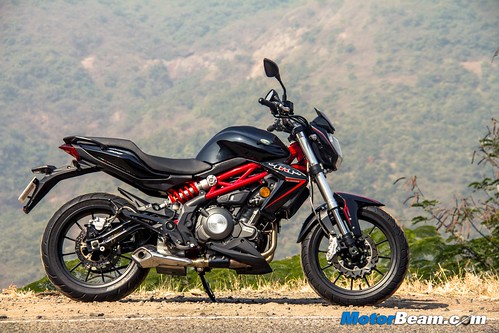 Ergonomics – The Benelli TNT 300 has a very comfortable riding position, it isn’t totally upright but a bit forward bend, resulting in utmost comfort even on long rides. The seats are cushioned soft and coupled with a generous pillion seat, you can travel two up without encountering fatigue. The pegs are rear-set and the seat height makes this bike suited for both short and tall riders alike. The leaf like mirrors might be good to look at but rob away from the field of vision, a rare case of form over function on this motorcycle. The TNT 300 gets good palm grips and an adjustable brake lever. The bike’s stand has an extension on it which makes it easy to engage and dis-engage the stand with ease. 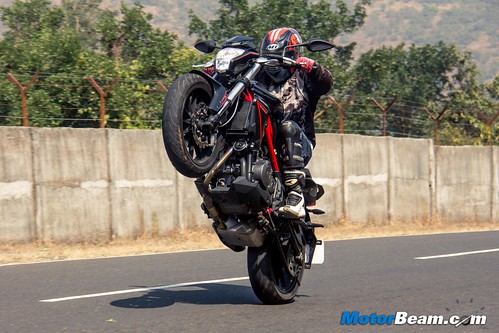 Performance – Turn on this bike and the tachometer first swipes all the way to 14,000 RPM and comes back while the screen displays the text “300”. Before you think any further, you are engaged by the sound of the motor which is a sweet sounding 300cc, parallel-twin unit that generates 38.26 BHP of power and 26.5 Nm of torque. The Benelli 300 gets two catalytic converters along with two O2 sensors and two 38 mm throttle bodies. There is good enough punch right from get go, the TNT 300’s motor being very tractable (will do 10 km/hr in third and 20 km/hr in sixth gear, there is no knocking) which makes it easy to ride in the city. In fact, there is no heat whatsoever from the motor even when you crawl in the worst of traffic. When riding in town, one doesn’t have to work the gearbox much. The first three gears are very tall while higher up, it is shorter. 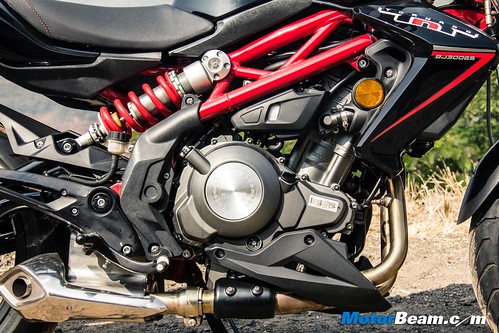 Benelli have got the sound just right, it’s a 10 on 10 for the exhaust note

Just to give you an idea as to the nature of the tall gearing on the Benelli TNT 300, first is good enough for 62 km/hr, second takes you to 90 km/hr while in third you not only do the ton comfortably but hit a top whack of 114 km/hr. Cruising in top gear at a speed of 100 km/hr results in 6800 RPM on the tachometer. Redline comes in just under 12,000 RPM while the 0-100 km/hr sprint took 8.19 seconds as per our VBOX tests which is quick but not as quick as the output numbers made us expect (the extra rolling resistance from the wider tyres hurting its outright acceleration). That’s also because the TNT 300 isn’t as fast revving a bike, power delivery isn’t urgent but smooth, the motor not very free revving but nor is it intimidating which means you won’t run into the limiter easily. There is good mid-range and top-end is enjoyable too, although it is far from being like its Japanese rival. 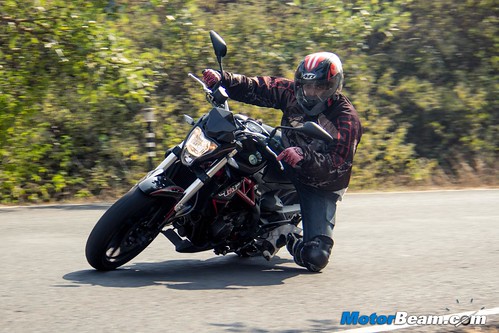 Some buzzing was felt on the pegs at high revs (not on the handlebar) but what really masks that and the slow revving motor is the sound. The Benelli TNT 300 is by far the best sounding twin-cylinder motorcycle and it’s a no contest. It just sounds ridiculously good and the 2x2x1 exhaust is so sweet sounding that this Italian beast almost sounds like a 4-cylinder bike! The crazy vocals starts coming in at 5000 RPM and all hell breaks loose post 8000 RPM where the 300 Tornado emits an absolutely crazy and bassy orchestra. It is so loud that everyone around you turns to see what’s coming, including the fairer sex who is usually least bothered about motorcycles. The sound of this machine is so addictive that you will be twisting your right wrist to just listen to it and rolling of the throttle to hear the revs fall, all this is certain to affect mileage but the TNT manages a good 28 km/l which along with the big fuel tank gives it a good range. The 6-speed gearbox supports clutchless upshifts (the clutch is on the heavier side) and the transmission is very precise with shifts. 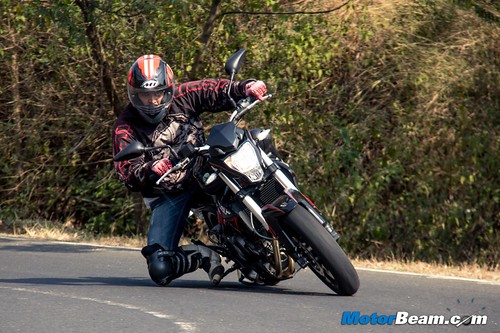 Riding Dynamics – With top drawer hardware on offer, the TNT 300 was bound to be dynamically rich but one look at the spec sheet and the 196 kgs of weight becomes a worry. However, out on the road, the weight isn’t felt, this Benelli offering good handling and the eagerness to turn around corners with surefooted composure. But try to get to the limit and there is one big problem. While the ground clearance is good enough to not scrape this Italian’s underbelly anywhere, the exhaust touches the ground when you lean too far out on a right corner. 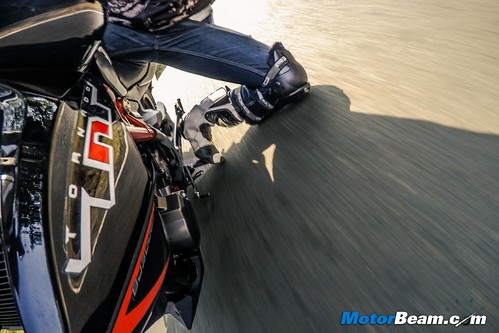 The TNT 300 is quite fun and stable around corners, the tyres offer super grip

The steering isn’t very quick but the added weight and widest in segment Pirelli Angel rubber (will be more expensive to replace since no desi manufacturer makes the TNT’s tyre size but these tyres are optional as narrower MRF tyres are standard which also do duty on the KTM Duke 200) aid in high speed stability, windblast being a natural occurrence on a street-fighter naked. Where the TNT 300 truly excels is the ride quality, it’s just excellent and the motorcycle simply glides over the worst of tarmac, not alerting the rider of any unevenness on the road. The TNT 300 gets dual Benelli discs up front and there is ample braking performance on offer at both ends, the rear being quite powerful too. This motorcycle also gets steel braided brake lines but ABS isn’t on the cards, at least not anytime soon. 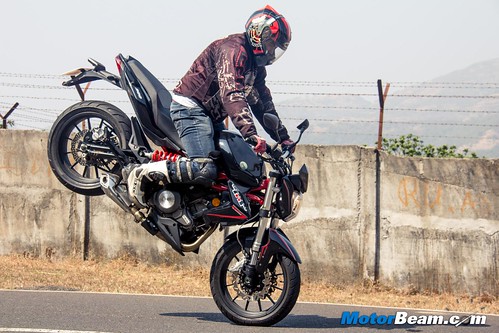 If priced aggressively, the TNT 300 is sure to stop people at Benelli showrooms

Verdict – Before we rode the Benelli TNT 300, we didn’t have very high hopes from the motorcycle but it sure comes across as an interesting package. Yes it’s not as fast as a KTM Duke 390 or as mad revving as a Kawasaki Z250 but this Italian machine has its own character which is very likeable. It won’t put the tarmac on fire with its performance but still there is ample of it to keep you interested. Where the TNT 300 truly excels is comfort, making it one machine which can perform touring duties without much fuss. Factor in the design, ride quality, rich hardware and the fact that this is the most affordable twin-cylinder bike in India and this 300cc machine immediately makes a whole lot of sense for many of us.

The Benelli TNT 300 is a very interesting bike as it fills a void in the Indian 2-wheeler market. It’s a motorcycle which will suit people who are looking at practicality without missing out on the fun factor. 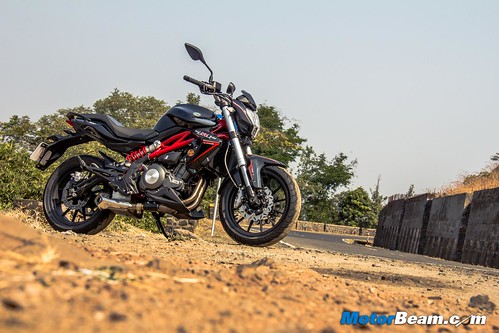 * Engine could do with more punch
* ABS not offered 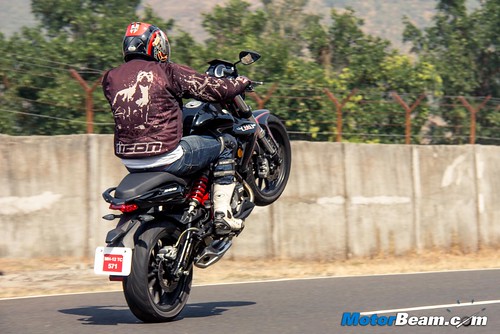