Benelli is more than a century old and has its roots in Italy, making it the oldest European motorcycle company in operation, started by a group of six brothers. In 1921, Benelli launched its own motorcycle, housing a two-stroke single-cylinder 75cc engine and a year later, it made it a 98cc, both engines made in-house. Similarly the company had its further growth with offerings of 98cc and 125cc lightweights and some 350cc and 500cc singles. The race winnings on the 175cc and 250cc motorcycles by Tonino Benelli in Europe, MotoGP championships and Isle of Man Tourist Trophy revealed the reliability and the capacity of the motorcycles, making the company more famous.

Benelli has tied up with the DSK Group of Pune to bring their bikes into the Indian market via CKD kits from Italy and China. The Benelli TNT 600i (known as BN 600i in certain markets) is one of the initial offering which has an in-line four 600cc mill and packs Italian design, Benelli’s performance and great attention to detail and styling. The BN in the badge stands for ‘Benelli Naked” which means that the bike it a total naked street-fighter with a muscular stance and sheer smooth performance, however in India, DSK is calling it the TNT 600i. We get to know whether the TNT 600i is really a monster underneath or just a toy for fun.

Motor Quest: In 1988, production at Benelli stopped and the plants were sold off. In 1995, Andrea Merloni bought the rights to the Benelli brand and at the 1999 Milan Show, a 900cc triple-cylinder bike, the Tornado TRE was launched as a competitor to the 1000cc Triumphs, helping Benelli get back to the motorcycling world. 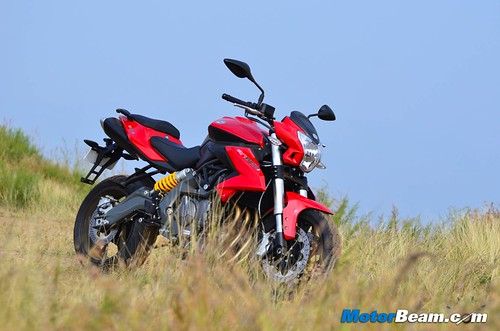 The Benelli TNT 600i seeks all the attention even when standstill

Styling – Italians have real crazy minds and their work on the styling and details in just marvellous. Visually the bike feels small and compact but on a clear view, the huge tank, small headlamps, trestle frame, wide tyres all make the design very much proportionate and simple. The detailing is just bang on. The small headlamp and muscular tank with semi side fairing give the TNT 600i a good and honest appearance. Front upside down forks blend in with the muscular tank very well and hold the front 120 section tyre with twin discs in sync. The handle bar is a single piece unit which has a classic street-fighter look. 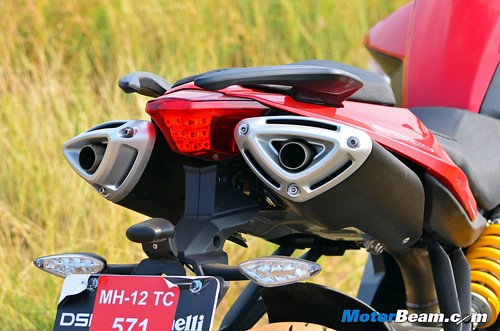 The design of the rear is very well executed, twin exhausts look surreal

The vertical headlamp is bright and has a great wide spread of illumination on the road. The LED indicators are thin and long but are bright and have good visibility. The split seats look very nice as they gel-in with the street-fighter looks. The twin triangular under-seat exhaust just steals the show with a triangular LED tail lamp placed just between the pair. The trestle frame and the asymmetrically placed rear monoshock holds the swing-arm strongly. The bright yellow colour of the mono suspension is an attention seeker. The swingarm is crafted so very well that its curvy design and agility are very well visible as it holds the 180 section rear tyre very nicely. 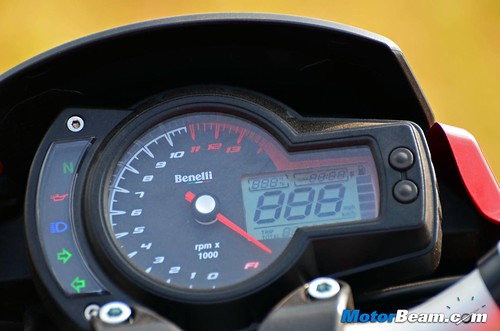 Instrument Cluster and Switchgear – The console is semi-digital and has a orange backlight LCD. Details like speedometer, odometer, single trip meter, fuel gauge and time come within the display. The tachometer is analog and has redline coming up at an early 11,000 RPM. There is a specific FI indicator LED in the instrument panel which shows the system working properly, it stays on while riding if the injection system has some fault. The switchgear is simple and offers good feedback. The standard Indian headlamp switch is replaced with a hazard lamp switch. The quality of the switchgear is good but not exceptional. 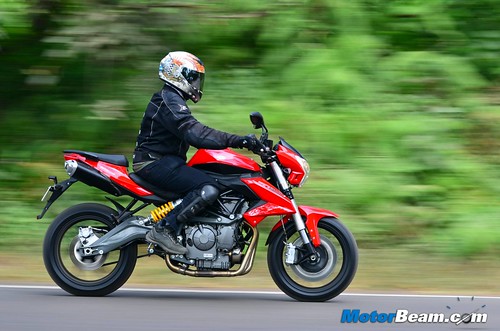 With the higher set foot-pegs, the bike feels very compact when you are seated

Ergonomics – The seating position is upright but the handlebars are a bit far for short riders. The seat is wide, decently soft yet very much comfortable. The tank has a spectacular design and the tank side scoop tucks the knee in quite nicely. Even after being bulky, the seating feels quite compact and comfortable. The footpegs have rubber cushioning. The pillion seat is very high but the seat is soft and has decent cushioning. The levers are made of stainless steel. The brake lever has a 4-way adjustable setting according to the rider’s necessity. The seat height is a tad bit more for a short rider but decent enough that the feet touches the ground, the only issue for short riders would be managing the weight on a standstill. 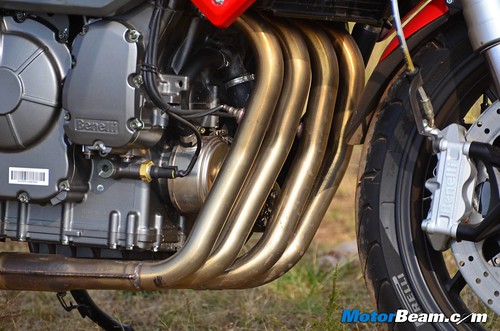 Performance – Benelli has powered the TNT 600i by its in-house made 600cc in-line four-cylinder engine, with each cylinder having 4-valves. The four 38 mm throttle bodies feed in and the engine churns out a decent 85 HP of power while having a torque output of 54.6 Nm. The difference at which the torque and power comes out isn’t much and hence the bike is just one crazy machine near the redline. The weight is what settles this bull down. The 231 kgs of Italian engineering take some efforts to move at initial speeds but once in motion, the machine does get angry quite soon. Hitting the ton just takes four seconds with absolutely no respite from the motorcycle till the double ton. 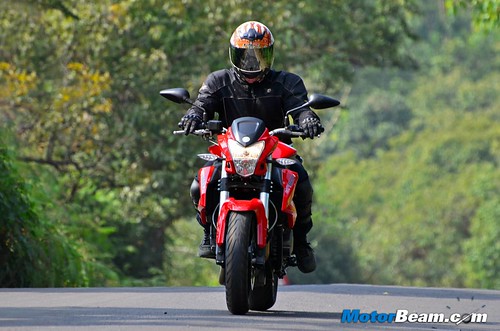 The power delivery from the in-line four is linear and can be enjoyed under the 5000 RPM. However, once past the 7000 RPM mark, the motor kicks in with power so drastically that the speedometer just gains all the numbers it can. It’s really the mid and top-end of the TNT 600i which has offers the most drama. The smoothness of the bike is exceptional. At any speed and at any gear, there is no knocking from the engine. Comfortably cruising in sixth gear at 5000 RPM with the bike doing 100 km/hr is an easy task, whereas insanely redlining the bike in second gear shows 130 km/hr, at both times the engine felt butter smooth except the windblast which is always a downside for riding a naked bike. The gearbox offers smooth shifts but the fuelling could do with more precision to prevent any snatchy feel at the low-end. 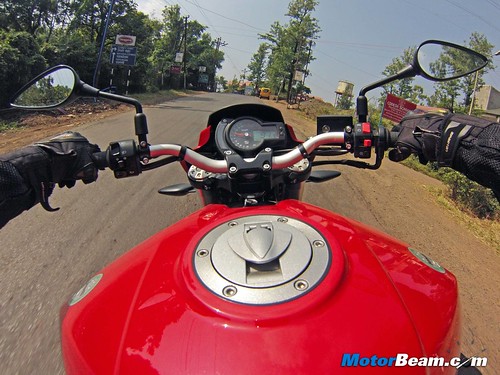 Four-cylinder engines have the best sound track, that’s played from the exhaust when revved and even at idle. Our test ride route had quite a lot of straights, curves and tunnels, and all the tunnels we redlined the bike to savour the sound. The surround sound of the exhaust note is the best we have come across on a locally assembled bike on a total stock setup. Clocking about 300 kms and the 15-litre fuel tank needed a re-fuel, we could say that the motorcycle returned a tad under 20 km/l on combined riding in the city, highway and ghats. 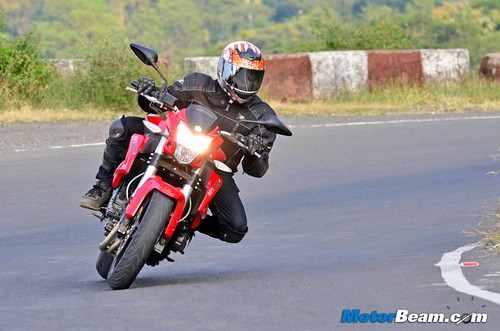 Rigid and stable, the signature frame does its work exceptionally well

Riding Dynamics – The chassis is a Benelli signature steel trestle frame combined to an aluminium rear frame that holds the rear suspension and this combination of the frame gives the required agility and lightness. The bike weighs 231 kgs and that is quite a lot for a 600cc middleweight. The TNT 600i is just stable in any kind of riding situation, let it be cruising at high speed or putting it through tight corners and bends, the motorcycle is just as stable as it can be. However the weight puts it off while riding in the city as manoeuvring through traffic needs effort and care. The tyres are the best to be found, soft compound Pirelli Angels that offer great dry grip and pretty good wet grip. The tyres got heated up quickly as we started riding and the amount of grip was immense. 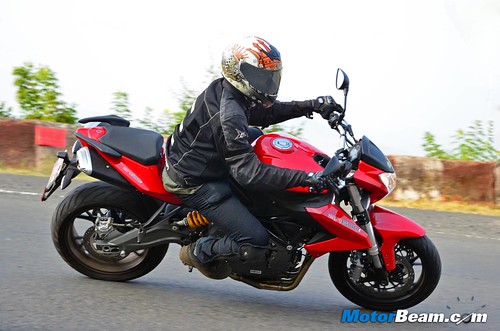 The suspension on the Benelli TNT 600i is a pair of upside down forks with 120 mm travel at the front and asymmetrically positioned monoshock with 123 mm travel at the rear. The suspension is stiff but not extremely so, thereby providing a good pleasant ride while also ensuring great stability in tight corners. The setup on the bike with the well set-up suspension, fabulous tyres, Benelli signature frame and the weight makes the TNT 600i easily flickable through twisty roads. The bite of the brakes isn’t much but the feedback is worthy to stop the heavy bike instantly. The absence of ABS is a bit saddening as this bike has the ability to reach tremendous speeds in no time. The TNT 600 is available in two flavours, the other can be seen in the background

Verdict – The Benelli TNT 600i is the first 600cc bike in India to offer an in-line four mill with an under-seat twin exhaust, pulling all attention. The focus on styling elements and details is just marvellous. The bike has the ability to keep-up with litre-class offerings on Indian roads while one will be able ride it comfortably in the city. As the TNT 600i is brought to India via the CKD route (from China where it’s being made), aggressive pricing has done the trick. Even though this Benelli is practical enough, the TNT 600i feels very fast but stable; thus being a good pick for those who want a middle-weight motorcycle with a soul.

The Benelli TNT 600i might be new in the Indian market but it makes a strong case for itself by offering performance, stability and comfort, all put together neatly. It’s also quite desirable a machine. 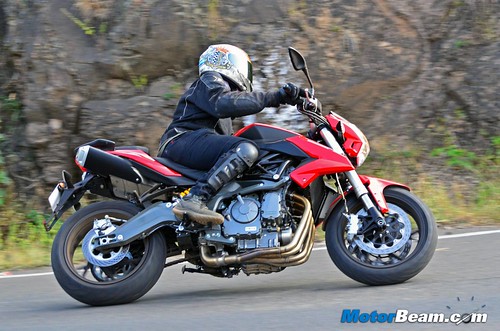 A head turner, quite ahead of its competition but still misses out on some gadgets 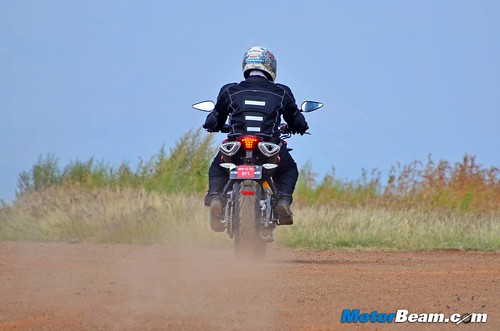