Fiat’s India journey hasn’t been smooth enough as the Italian automaker wasn’t able to capture the minds of the mass market. That could change with the company’s latest offering, the Fiat Avventura. It’s no secret that we Indians love SUVs and even crossovers are finding good flavour with a majority of buyers, case in point being the Ford EcoSport. While it will take Fiat sometime to bring in a compact SUV, the Avventura crossover should serve the purpose well in the immediate future and although it looks like an athletic Punto Evo, there is much more than what meets the eye. This is one car which has the potential to change Fiat’s fortunes in India overtime, or can it? We had to drive it to find out just that. 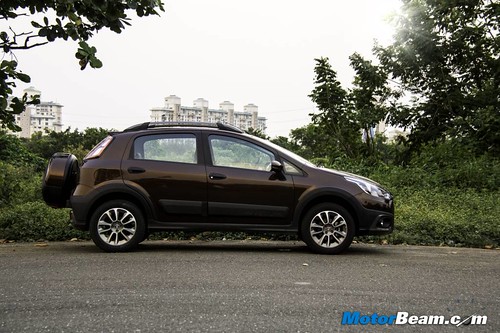 The Avventura has a bold stance, like all Fiats, it also stands out on the road

Exteriors – There is absolutely no doubt that Fiat knows its design very well, all its cars are extremely well styled and somehow the appeal never subsides. The Avventura shares its styling with the recently launched Punto Evo but there are changes which give it the macho feel. The front gets a more aggressive bumper with faux skid plates while the whole car gets a black body cladding. The side gets black coloured door handles and thick door protector strips. The car also gets aluminium roof rails which are not only light but also serve their purpose of supporting a roof rack. While the regular Punto already has a massive ground clearance, the Avventura is 20 mm higher at 205 mm which puts it on par with the Renault Duster and Nissan Terrano. 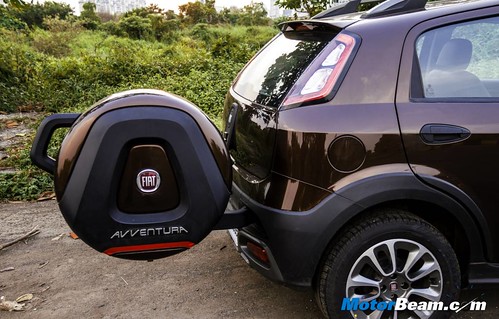 Fiat has also given the Avventura 16-inch wheels which are standard on all trims, what is also standard is the tail gate mounted spare wheel (with Avventura written on it and a reflector placed below it) which gives this Fiat a very SUV like feel. Unlike conventional tail gate mounted spare wheels, this one doesn’t open as a single unit, instead it has a swinging arm since the boot door still opens upwards. You have to unlock the boot to move the spare wheel cover to the side and the whole exercise is about style over usability as opening the cover on the spare wheel unit to access the spare tyre isn’t an easy task. The Avventura has flared wheel arches, the lights are fantastic (the car has strong lights, the throw is crisp and illumination is good but at the rear the fog light and reverse lamp is placed too low) and the overall stance of the car just reeks of pure unadulterated sexiness. 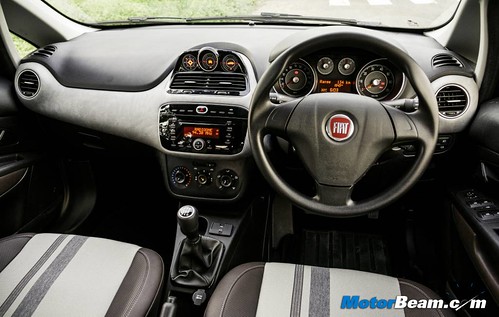 The interior get a nice dual-tone finish, notice the three meters in the centre

Interiors – The cabin of the Avventura is similar to the Punto Evo but Fiat has made multiple changes to differentiate the two cars. Our test car was the mid-level Dynamic variant (there is no Emotion trim in petrol) so some equipment was missing but the vehicle is still quite loaded for a lower trim. All the features offered on the Punto Evo are present on the Avventura but what’s more are the three pods which sit right above the centre AC vents. Now the Avventura isn’t an off-roader, power is still fed to the front wheels so having a compass and tilt meters (for both axis) serves little purpose, it’s still cool though. The dashboard gets the dual-tone treatment and the middle part is finished in soft touch velvet like grey colour which is very unique. The seats and doors pads are finished in brown, they use artificial leather and look really good. Audio quality is good for a stock unit but the lack of Bluetooth streaming continues to be a grave omission. All windows roll down with one touch but only the driver’s rolls up with one touch. The Avventura has double blade wipers and they do an excellent job. 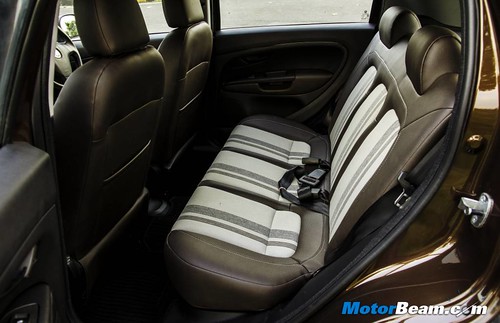 Rear seat space is decent and the Avventura feels very solid, just like a tank

Fiat cars are always well appreciated for their build quality and the Avventura impresses as well, it feels like a tank and there is a solidity which even German cars can’t match. Fit-finish is good but the plastics are hard, the big glitch we found with the quality of the car was the finish on the arm of the tailgate mounted spare wheel. The cabin is a nice place to be in, there is good interior room too although the rear bench has just adequate space while lacking on under-thigh support and headroom is an issue for tall passengers. The seats are firm and offer good comfort but the headrests are a tad too hard. There are quite a few storage bins (the glovebox is small though) including door pockets, ticket holder below the right most AC vent, seat back pocket, centre console and a nice cup holder between the front seats for the rear passenger. Ergonomics are decent but the steering is too far ahead towards you, there is dead pedal though and visibility all around is better than average. The boot has good capacity and the space saved is used to store the toolbox. 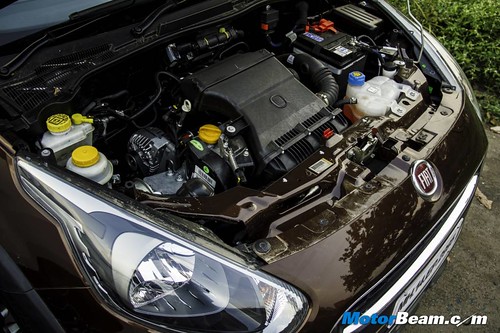 Performance – There is nothing new when it comes to the engines on offer, the Fiat Avventura draws power from the same 1.3-litre Multijet diesel mill which outputs 90 HP and 200 Nm (only the higher state of tune is being offered and there is no 75 PS diesel in the lineup). This engine is known to have plenty of lag lower down but the mid-range is strong with a decent top-end to boot. Thus the diesel Avventura is best suited for highway driving as tackling the urban environment’s stop and go ordeal isn’t where this crossover shines. The 5-speed gearbox shifts decently well when you tackle the lever with patience and care but get a bit aggressive and the cogs don’t swap as smoothly, lending a notchy feel. 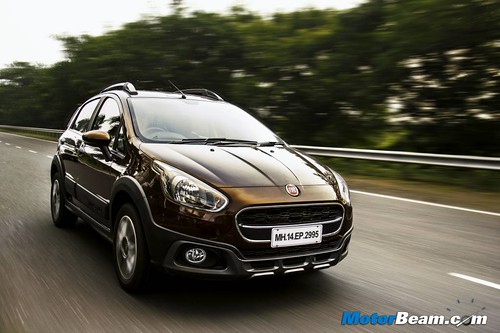 The petrol Avventura has surprisingly good performance, it drives very well in the city

The other engine is the 1.4-litre petrol mill which produces 90 HP and 115 Nm of torque. This motor is quite good if you drive sedately as there is good low-end punch while the mid-range is decent too, although top-end is where it lacks. Still, the Avventura’s petrol mill sounds very sweet near its 6600 RPM, becoming quite vocal once you whizz past 4500 RPM. The motor isn’t fast revving but doesn’t struggle and accelerates smoothly till 130 km/hr. As per our VBOX runs, the petrol powered Avventura managed to do the 0-100 km/hr sprint in 13.89 seconds (0-120 km/hr takes 21.52 seconds) which might not sound fast but is pretty quick for a petrol Fiat as this car does weigh quite a lot. 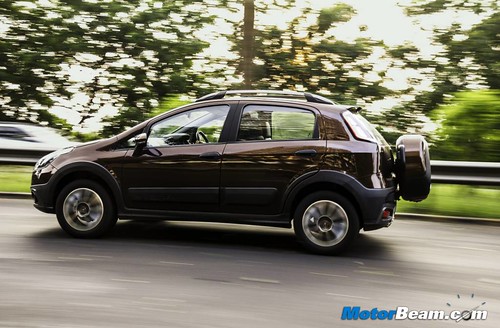 The Avventura should have got the T-Jet mill, it would have helped big time

The FIRE engine has low NVH and the gearbox is smooth with the clutch being light too. First gear is good enough for 45 km/hr, second for 80 km/hr while third will take you well past the ton. The engine cuts off smoothly at redline. 100 km/hr in top gear results in 3100 RPM on the tachometer. The mileage we got on our test was 11 km/l which is decent for a car of this type. This engine won’t set your pulse racing but does the job well although Fiat should have plonked in the T-Jet motor in this car, it would have completely changed the experience of driving the Avventura. 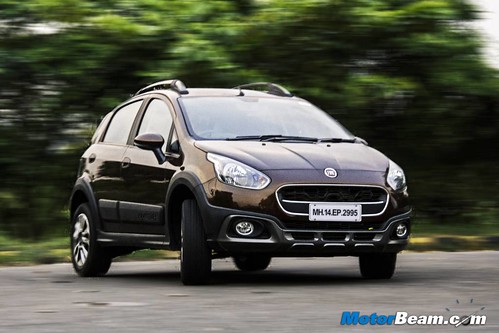 Fiat has retuned the suspension, ride and handling balance is simply fantabulous

Driving Dynamics – Whenever you come to this part of a Fiat car review, you know things are extremely positive and praises are a plenty, same is the case with the Avventura too. The ride and handling balance is just fantastic, the car is so eager to drive on both good and bad roads. Fiat has re-tuned the suspension to tackle the added 60 kgs of weight. The Avventura also gets a rear anti-roll bar and the vehicle delights with the way it handles. In spite of the raised height, handling is crisp and body control is simply fab. The suspension handles bad roads with ease although subjecting it to the post monsoon roads of Mumbai did lead to some sort of vibes. 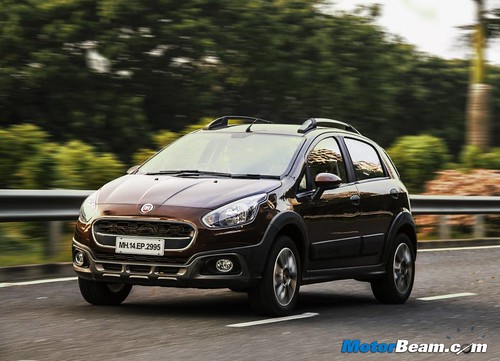 The Fiat Avventura has a crisp steering, the grip on offer is just tremendous

There is some stiffness but that in no way hampers the ride quality, it’s still a car which will keep you comfortable over the worst of tarmac. The steering has just the right feel, it’s precise and the hydraulic unit is feedback rich. The Avventura might be heavy but it doesn’t feel as heavy as you would expect. What really impresses is the grip on offer, the 205/55/16 Goodyear Eagle NCT5 tyres have so much grip (with the chassis supporting it), that you can dive into corners carrying insane speeds and it just goes, no tyre screeching, no understeer, just pure grip and delight. The car is stable at speed and that’s in spite of the higher ground clearance which also means no worries on the worst of speed-breakers. The brakes are fantastic and stopping power is in plenty. 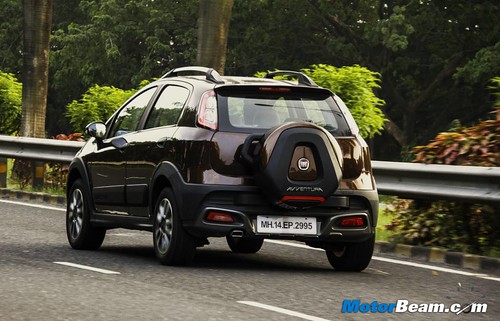 Fiat has a winner on its hands with the Avventura, it’s a genuinely impressive car

Verdict – The Avventura isn’t a half hearted effort like the Volkswagen Cross Polo or the Toyota Etios Cross, instead it’s a splendid job done by Fiat and they really deserve applaud for it. Right from design to ride and handling, the Fiat Avventura manages to tick all the right boxes. It isn’t perfect but the desirability it offers is difficult to match at its price point. Fiat is positioning the Avventura as a CUV (Contemporary Urban Vehicle) and from what we gather, this is a car which really deserves to be a hit in the Indian market, it’s a vehicle which fares very well in most parameters.

Fiat’s Avventura might not be a full blown compact SUV but this crossover still has acres of appeal and manages to perform exceptionally well in quite a few important areas. 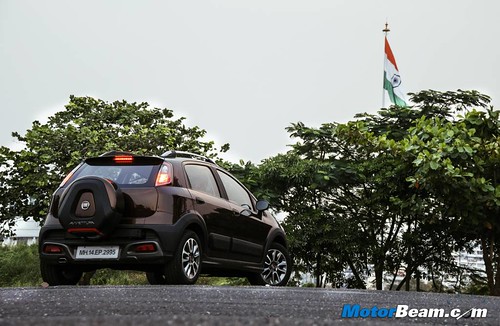 If marketed well, the Avventura could turn Fiat’s fortunes in India for the better

* Could do with more powerful engines
* Driving position far from perfect