The D-segment has been shrinking in India as prices of this sedan type has been on the rise while the demand has been on the decline. That’s the reason why Hyundai has taken a real long time to bring the Elantra facelift to the Indian market as the mid-life update of this popular sedan came way back in August 2013. Such facelifts are always minor and are a stop-gap measure to keep the sales register ticking till the all new model arrives, which in the case of the Hyundai Elantra, is already under testing for a 2016 global launch. Having lived with the Elantra for more than half a year as part of our long term test, we sample the facelifted model to see if the changes transform the vehicle’s appeal further? 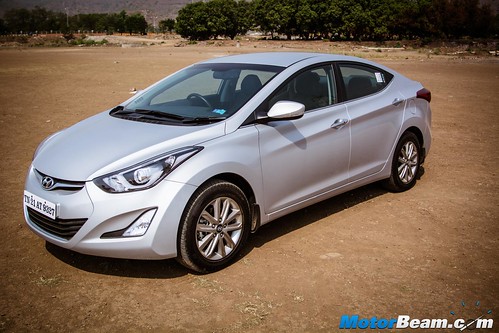 Exteriors – The Hyundai Elantra has always been a looker and although some find it too flashy, one can’t deny the fluidic styling does grab attention. There aren’t major changes on the exterior so the layman won’t be able to differentiate the pre-facelift and facelifted models. The headlights are new, they are projector units with an LED guide lights, the housing has been blackened out. So while the headlights look more attractive now, they also dish out better illumination at night, courtesy of the projectors. The fog lamps get a re-design too, are L-shaped and the front bumper gets minor revisions. 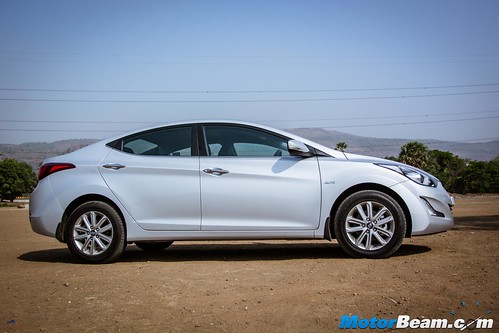 At the side, things aren’t very different either with the only striking change being the new alloy-wheels which have 10-spokes (the old car came with 5-spoke alloys). At the rear, you still get the same long an elegant tail lights which are new with a LED look-alike appearance. The rear bumper is new as well and features a blackened out lower section to reduce the visual bulk. It now features a new exhaust muffler which is visible, unlike the old car where the muffler was tucked away from visibility. All these changes do add to the visual appeal of the Elantra but doesn’t really make it look any different from the pre-facelift model. 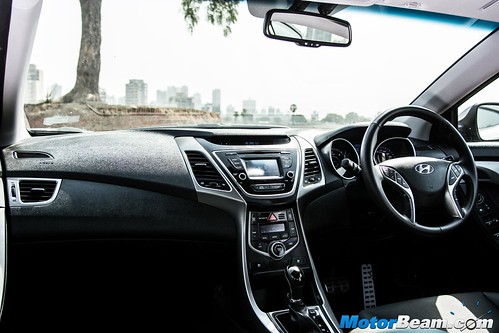 All black interiors in the Elantra look sporty, revisions on the centre console

Interiors – The changes on the inside are more substantial as Hyundai has given the cabin the black and grey colour treatment. This does look sporty but testing the car in the boiling summer, the heat absorbing black colour did not help but thankfully the Elantra comes with cold ventilated front seats. We definitely like the old car’s black and beige interior treatment as not only did it give the cabin an airy feel, it looks better too. Revisions have been made to the dashboard design as the Elantra now gets repositioned centre AC vents which are more functional as they are placed on either side of the infotainment system (the old car had smaller vents on either side of the climate control system, limiting airflow). The display for the climate control (the buttons are also new) gets a blue on black display, in-line with other Hyundais, as opposed to black on blue on the old Elantra. 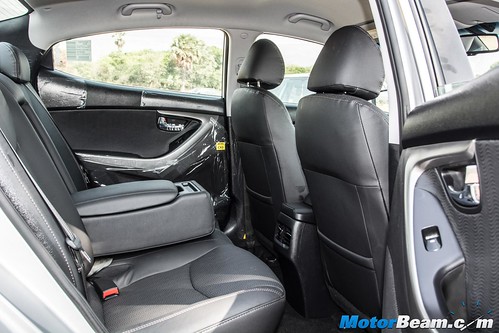 Hyundai has opted for a new 4.3-inch touchscreen audio system, replacing the out-of-place monochrome screen of the old car. The new screen also displays the view from the rearview camera while the same was placed in a smaller resolution on the rearview mirror on the old Elantra. An OLED screen on the centre console as seen in certain markets would have been a nice touch. Hyundai has removed the audio controls on the rear-seat centre arm rest, a cost cutting measure while there is still no distance to empty function on the multi-information display, a feature even cheaper cars in Hyundai’s lineup now come with. There is good room inside the cabin, the seats are supportive and there is ample legroom at the rear, but the rear bench is too reclined and if you are tall, the sloping roofline will hamper headroom for you. Equipment levels are good with Bluetooth connectivity, keyless GO, push button start, automatic headlights, leather seats, electric adjustment for the front seats and six airbags. 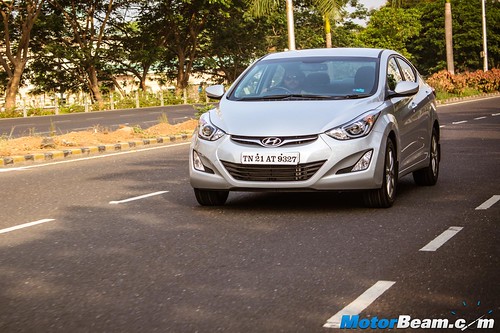 With the same engines on offer, the Elantra facelift has identical performance as before

Performance – While globally Hyundai has added a stop-go system to the facelifted Elantra, the Indian model doesn’t get any changes to the engine with the vehicle continuing with a 1.6-litre diesel and a 1.8-litre petrol. Neither of these engines will please enthusiasts but they do manage to balance power and economy quite well. The 1.8-litre petrol motor gets Dual VTVT and generates 149.5 PS of power while torque output is 177.5 Nm, one does have to rev the engine a lot to make good progress. 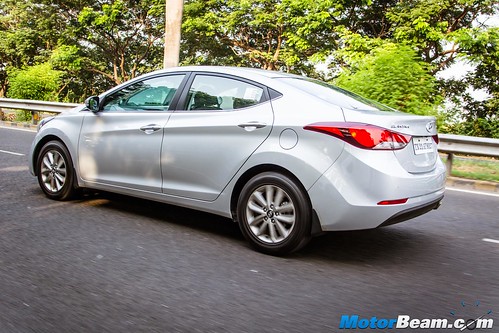 The Elantra’s engines offer good performance while being very frugal, NVH levels are quite low

The diesel engine is the same unit that does duty on the Verna, the 1.6-litre powerplant belts out 128 PS and 260 Nm. There is some lag lower down and it’s only post 2000 RPM that the diesel mill starts spinning with some eagerness, the mid-range being the best part of this oil burner. Top-end isn’t the talking point either but give the diesel powered Elantra the full throttle treatment and it nudges past the ton from standstill in a respectable 10.56 seconds. Both the petrol and diesel engines are paired to 6-speed transmissions, offered in both manual and automatic. The single-clutch autobox isn’t quick with shifts but with the NVH being very good, the smooth shifts is certainly appreciated. 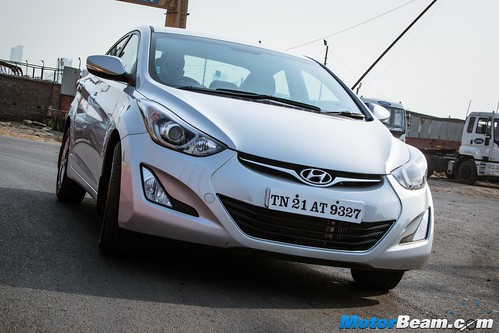 Driving Dynamics – Hyundai hasn’t made any changes to the dynamics of this D-segment car. The Elantra isn’t a driver’s delight and while it does handle decently, the steering just lacks feedback and feels quite vague, it sure is light at low speeds which enables easy manoeuvrability in the city while the vehicle remains quite stable at high speed. Ride quality is good at low speeds with some bounciness at high speeds but still it’s a very compliant car over bad roads. Braking performance is decent but the pedal could do with a better feel. 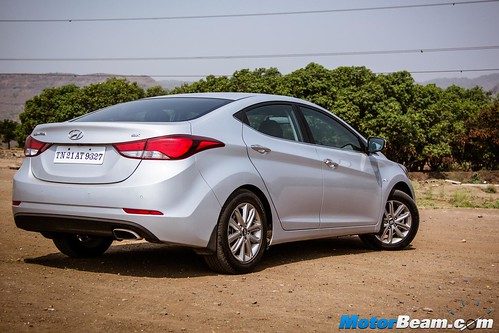 Verdict – The Hyundai Elantra has always come across as an excellent package in its segment. With the facelift, Hyundai has freshened things up a bit while also boosting the appeal of the car as it faces new rivals like the updated Renault Fluence (a dud seller), facelifted Volkswagen Jetta and the new generation Toyota Corolla (the current segment leader in terms of sales). The Elantra isn’t an enthusiast’s car and simply won’t paste a smile on your face like its German rivals but for most buyers who are looking for a comfortable car which is loaded with features and is easy to upkeep, the Elantra comes across as an excellent choice. The fact that it is cheaper than its rivals only cements its buying proposition further.

The Hyundai Elantra is a practical car which makes for a fine vehicle for most buyers, hence it is also a top-seller in other markets of the world. The facelift adds more appeal both inside-out while also giving it more equipment. 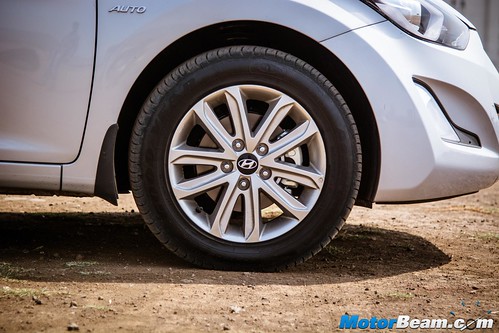 * Looks fresh in spite of its age, the current generation model is due for replacement next year
* Added equipment further highlights Hyundai’s feature loaded mantra

* No changes to the mechanicals, still drives the same and has the same performance too
* Rear centre arm rest audio controls was a segment unique feature but has been removed