The Hyundai Verna has been a very popular model for the Korean manufacturer in India. Launched in 2006, the Verna nameplate got even more popular when Hyundai launched the second generation fluidic Verna in 2011. The fluidic deisgn philosophy did the trick and the Verna soon became the best selling car in its class. Eye catchy design with a list of features on board, the Verna had a lot going for itself until Honda launched the fourth generation City in the Indian market. Previously, the City was only available with a petrol engine and with the launch of the diesel model, the Verna saw a decline in sales. Hyundai had updated the Verna in 2014 by adding a few cosmetic bits including DRLs and a marginal improvement in the ride and handling department but that did not do the trick. Now Hyundai has brought a more comprehensive update to the Verna in the form of the ‘New 4S Fluidic Verna’. Will this be enough to take the fight to the top of the segment? We find out in the lake city of Udaipur.

Before going further into the details, you must be wondering what the 4S really stands for? Well, in Hyundai speak the 4S is for Safety, Style, Sophistication and Speed (Performance) and this 2015 model is said to deliver on each of these fronts. Being a global product, the Verna is sold across 66 countries with more than 2.3 million cars sold across the world. We have already reviewed the 2014 Hyundai Verna in detail and in this review we will be majorly concentrating on the changes on the 2015 model. 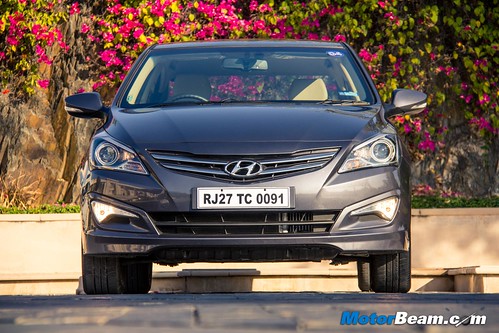 The front-end design of the Verna sees major changes, sadly DRLs have been removed

Exteriors – While the overall profile has remained the same, there are key changes to the fascia which makes it look more premium and sporty. The hexagonal grille has now gone and has been replaced by a wing shaped front grille with dual chrome slats. The headlamp assembly now gets projector lamps with escort function (follow me home in layman speak). Surprisingly, the Daytime Running Lights (DRLs) have been taken out which is shocking considering they were only recently introduced in the 2014 car. The new revised bumper holds the boomerang shaped fog lamps which give the Verna a bold stance. 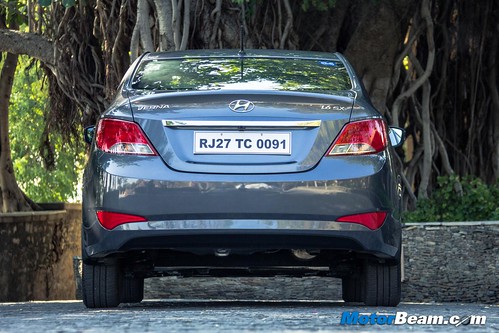 The changes at the rear aren’t very obvious, not as major as the front

The side profile of the 4S Verna is more or less unchanged except for the new grey and silver finished 16-inch diamond cut alloy wheels. Going to the rear, the new wraparound tail-lamps give out an LED effect and the new two-tone rear bumper now conceals the exhaust pipe giving the rear profile a neat and clean look. The remaining bits are similar to the outgoing model. So the car does end up looking fresh from the front but not so much at the rear as the changes aren’t as drastic as what is seen at the front of the vehicle. 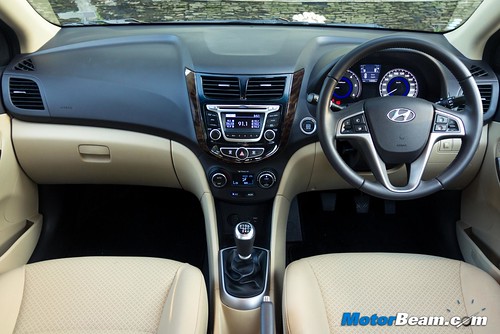 The interior continues to boast of excellent quality, no change in dashboard design

Interiors – Hyundai cars have always boasted of top notch interiors and things have only got better there. Fit and finish is fantastic and possibly the best quality of interiors you will see in the entire segment. The seats are supportive and Hyundai has improved the cushioning as well as the thigh support for both rows. Further, the rear seat is comfortable for three medium sized adults owing to the flat rear floor but you sit too low. Space is decent in both rows but headroom in the rear falls short for tall passengers due to the sloping roofline. The AC cools well but there are no rear AC vents which the much cheaper Grand i10 and Xcent also get. There are plenty of storage spaces for odds and ends but the infotainment system and instrument cluster look a bit dated now. 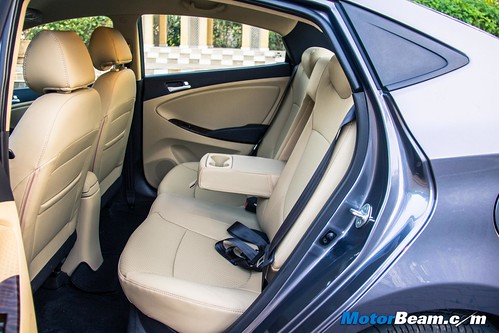 There are a few new bits as well. Hyundai is now offering a tilt and telescopic steering (previously only tilt), automatic headlamps and rain sensing wipers. Another new addition is the ergo lever which allows you to adjust the front passenger seat from the rear seat (like the Volkswagen Vento). The 2-DIN Bluetooth audio system now comes with 1 GB internal memory where you can save your music. Sound comes from 6 speakers and the quality is quite crisp. The Verna has always been feature loaded and continues to be so with features like electrochromic mirror, push button start, electrically adjustable and foldable external rear view mirrors, cooled glovebox, multifunctional steering and the list goes on. Safety is one of the pillars of the 4S Verna and it offers the best in class safety features such as 6 airbags, ABS (standard across the entire line-up), speed sensing auto door lock and impact sensing auto door unlock. 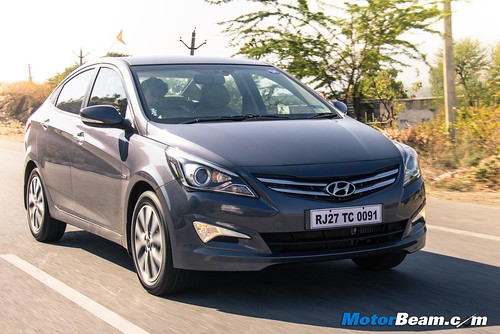 Performance – Powering the Hyundai Verna are the same time tested petrol and diesel engines. Both these powerplants are available in two options, 1.4-litre and 1.6-litre. The petrol engines use electronic throttle control and dual VTVT technology which ensures better mileage, good low end torque and reduced emissions. The 1.4 petrol produces 107 PS of power and 135 Nm torque with an ARAI certified fuel efficiency of 17.43 km/l. The 1.6 is the most powerful petrol engine in the entire segment producing 123 PS of peak power and 155 Nm of torque. This engine comes mated to both manual (6-speed) and automatic (4-speed) transmissions having a fuel efficiency of 17.01 km/l and 15.74 km/l respectively. There are no changes in fuel efficiency of the petrol engines. 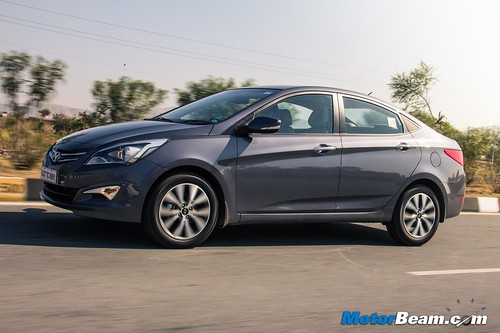 Coming to the diesel units, the 1.4-litre UII CRDI mill produces 90 PS of peak power and 220 Nm of peak torque, it will appeal to those looking for decent pep and good efficiency on the same page. Meanwhile our pick and the one we drove at the drive was the punchy 1.6-litre oilburner which produces 128 PS of power and a 260 Nm of twisting force. Both these engines use a VGT along with swirl control valve which enriches the air fuel mixture for optimal fuel efficiency. In the 2015 Verna, Hyundai has reduced the friction in the piston with a nano diamond coating which results in an improved fuel efficiency of 24.8 km/l (improved by 1.3 km/l) for the 1.4-litre and 23.9 km/l (1.58 km/l improvement) for the 1.6-litre while the 1.6 AT delivers 19.08 km/l (same as before). Both diesels are mated to a 6-speed manual transmission while the 1.6 also gets the option of a 4-speed AT.

The 1.6-litre diesel engine on the Hyundai Verna sees the turbo spool at around 1800 RPM so it isn’t the best to amble around in the city but it does open up freely on the highway, enabling one to get to triple digit speeds quickly. The engine is strong in the mid-range with power fading off as you get to the rev limiter. Mated to this engine is a 6-speed gearbox which offers butter smooth shifts and evenly spaced out ratios. The tall sixth gear comes in handy while cruising on the highways. NVH levels are fantastic and you can barely tell if the engine is idling. The well insulated cabin ensures that there is absolutely no diesel clatter making its way inside. This is arguably the most refined oilburner in the entire segment. 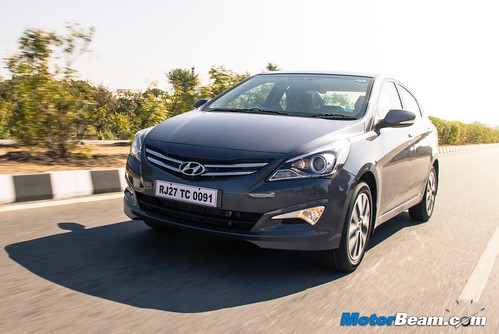 Driving Dynamics – Ever since the fluidic Hyundai Verna came out in 2011, it has been a fabulous car with perhaps the only kink in its armour being ride and handling. The ride was bouncy and the handling inspired little confidence at high speeds. The 2014 update did improve the ride and handling characteristics but it wasn’t too significant a change. However, the 2015 update is the most comprehensive one to the driving dynamics. Ride quality is still good and Hyundai has done a few changes to the suspension. The Koreans have now gone for a stiffer suspension set-up and the rear coil spring now offers a more ideal spring stiffness rate to counter bumpy ride. The rear shock absorber comes with a low velocity control valve which ensures appropriate damping force. Further, the bump stopper contact area comes with emboss finish to counter the thud sound. 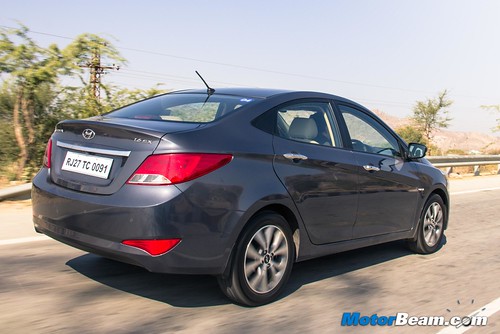 The Verna’s steering offers improved feedback, the car stops with more confidence too

All these changes translate into better dynamics (the diesels offer better dynamics over the petrols due to being stiffer). The Hyundai Verna no longer feels bouncy, it feels planted at high speeds and takes sudden change in direction with much more ease. Further, the steering feedback has vastly improved and is more inspiring as speeds increase but still the unit is quite vague. The steering is light at low speeds (heavier than before though) making it easy to drive through the city while it weighs up much better than before at high speeds but the ride and handling balance is still not even remotely close to the benchmarks in the segment (read Ford Fiesta, Fiat Linea and Volkswagen Vento/Skoda Rapid). High speed stability is greatly improved and the ride is flat and settled but it’s not glued to the road like most of its rivals. We didn’t notice any suspension noise on our drive. Another vast improvement is in the braking confidence. Previously the car had a tendency to yaw forward on hard braking, this is now well controlled. Slamming the brakes at 100 km/hr resulted in the Verna stopping without any drama but the ABS is over sensitive and engages quite early. Hyundai has removed rear disc brakes on the manual variants. 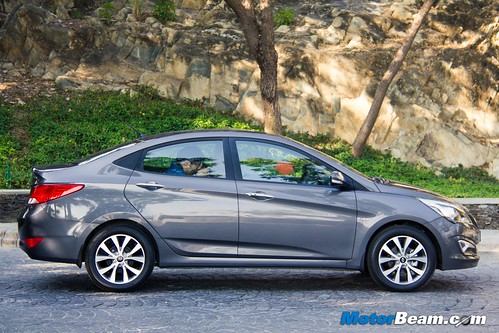 Verdict – Hyundai’s latest update to the Verna adds a flair to the design quotient and addresses the shortcomings in the dynamics department. Stupendous build quality all around and comfortable seats make the interiors a great place to be in. With the most powerful engines in its kitty, the Verna is right there when performance counts yet delivering decent fuel efficiency at the same time. The Hyundai Verna has always offered a lot in terms of equipment and the addition of a few features plus the highly improved ride and handling make the 4S model a compelling buy in the much crowded C-segment.

The 2015 Hyundai Verna comes with additional features with significantly improved driving dynamics. The Verna offers the best in segment performance with some fabulous engine refinement and NVH levels. The entire package is more appealing now making a lot going for the 4S version. 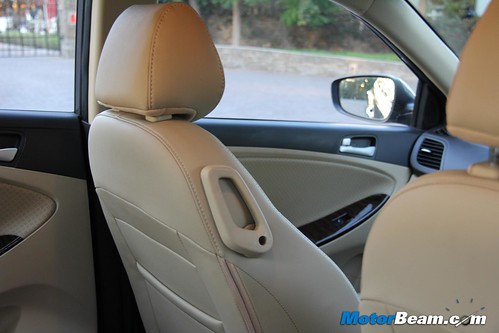 * Mature and fresh front-end design
* Performance is class leading in terms of numbers, most engine options in the segment
* Improved ride, handling and braking confidence over its predecessor
* Feature rich cabin makes it generous in the equipment department
* Emphasis on safety with all variants getting ABS, top trim gets segment first 6 airbags
* Build quality is top notch, cabin feels very well put-together
* Light steering makes it easy to drive in the city
* Top of the class NVH levels keeps the cabin very silent

* Some equipment has been removed like DRLs and rear disc brakes (on the manuals)
* Certain things feel dated like infotainment system and instrument console
* Rear seat lacks headroom, seat is too low
* Engines don’t feel exciting in spite of being the most powerful
* Age old 4-speed automatic transmission, no update to 6-speed
* Ride and handling balance still not close to most of its rivals
* Over sensitive ABS kicks in too early

Hyundai Verna Gets New SmartStream Engine In The USA