Among the Japanese motorcycle manufacturers, Kawasaki has positioned itself as a premium automaker and the same is reflected in their pricing as well. With the ZX-14R maker having expensive bikes on offer, sales have been limited. However, the company is on an offensive and after launching a slew of fully imported superbikes, Kawasaki has turned back focus on locally assembled models with the launch of two street-fighters, one among them becomes the automaker’s entry-level India offering, the Z250. The Kawasaki Z250 holds a lot of promise as it’s the most affordable Kwacker in our country but does it deliver?

Motor Quest: The Kawasaki Z250 is the naked version of the now discontinued Ninja 250. The Z250 name isn’t new, Kawasaki produced a model with the same name between 1980 to 1983 as a replacement to the Z200, evolving into the higher capacity Zs of today. The current Z250 is a fresh model launched only last year. 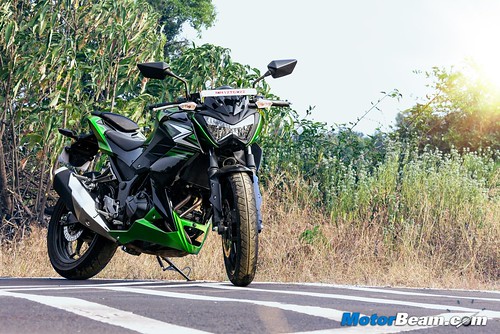 Styling – What happens when the design of the Z800 fuses with the Ninja 300? The result is the Z250 as the motorcycle looks very similar to the Z800 from the front while the rear is a straight lift off from the Ninja 300. Now that’s certainly not a bad thing at all but there is a small problem. You see, in today’s times, even 150cc motorcycles come with LED tail lights, neither the Z250 nor the Ninja 300 get LEDs and that’s in spite of being priced at a premium. So while the front comes across as striking, the rear could have used the Z800’s tail lights which are totally gorgeous. In spite of that, even with the derriere of the Ninja 300, the Z250 manages to look gorgeous. 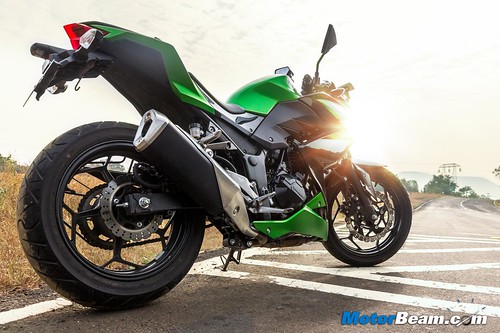 The rear shares most of the parts with the Ninja 300, still no LEDs

The Kawasaki Z250 is very muscular and that makes it look like a higher capacity machine than it actually is. The angry and wide twin headlight (offers impressive illumination at night) is the most striking aspect at the front while the side profile reveals this isn’t as naked a bike as one would expect. There is a Z-shaped half fairing with very little of the engine exposed while the big tank gives a hint of its massive 17-litre holding capacity. The rear design sees the tail section (mudguard, brake light et all), exhaust, twin seats and Y-spoke alloy wheels being shared with the Ninja 300’s part bin. Paint quality is just immaculate and so is the overall fit-finish levels, the matte green paintjob coming across as very rich. This bike looks substantial and has a lot of presence. 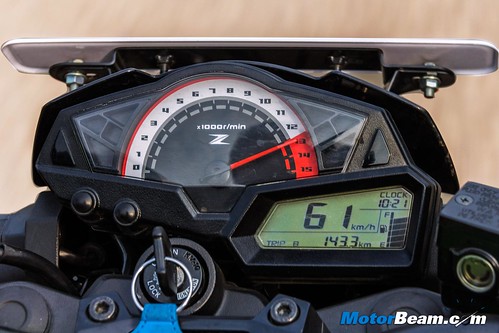 Instrument Cluster and Switchgear – The Z250 borrows its console from the Ninja 300 but the big difference is the colour and font used on the tachometer which takes centre stage. The positioning of the numbers is also a bit different and there is the Z moniker right in between. There are a host of tell-tale lights surrounding the tachometer including warnings for engine oil pressure, low battery voltage, engine temperature and oil pressure, OBD port, high beam, neutral indicator and shift light. The LCD screen below has the speedometer on it, along with twin trip-meters, odometer, a clock, fuel meter and also an economy mode indicator which is displayed when you ride sanely. Switchgear quality is excellent (no headlamp turn on/off button as the bike has daytime running lights) and the piano black touch on the switches is a nice touch. 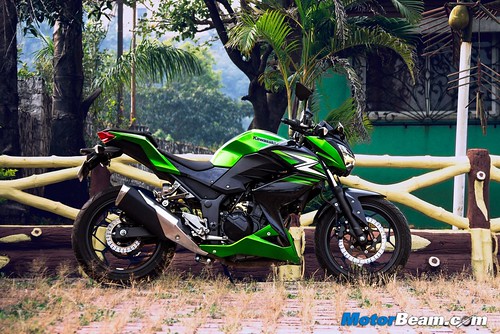 Ergonomics – The Kawasaki Z250 is a comfortable bike, you sit upright, holding a wide and straight handlebar, aluminium footpegs are mildly rear-set and there is a bit of sportiness involved here but still you will be extremely comfortable riding on for hours. The seats are on the harder side but still offer a lot of comfort. The pillion sits slightly higher and there is strap for him/her to hold onto, along with hidden under-seat recess which act as grab rails. There are also bungee hooks right below the rear indicators so you can attach your luggage and go touring without having to worry one bit about how to secure your bag. 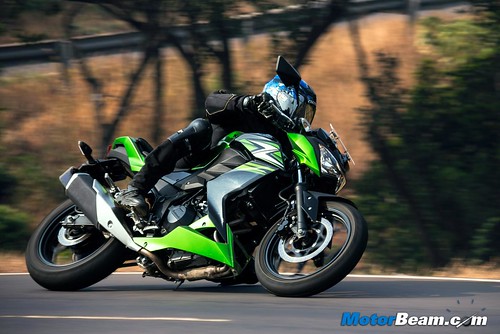 Performance – Powering the Z250 is the same motor from the Ninja 250 but it has got some revisions to fit the street-fighter characteristics of the bike. Still peak power and torque is produced way too high in the powerband and thus one needs to twist the right wrist very hard and fast to extract those 32 horses and 21 Nm of twisting force. In spite of that, the Kawasaki Z250 is a bike which feels at home in the city, although it doesn’t have an immediate punch, it doesn’t knock or feel uneasy when you ride at low speeds in higher gears, the refinement levels of the parallel-twin are just terrific. Even when ridden in stop-go traffic, heating isn’t an issue so this bike is at home in the city while there is ample top-end grunt for highway duties. 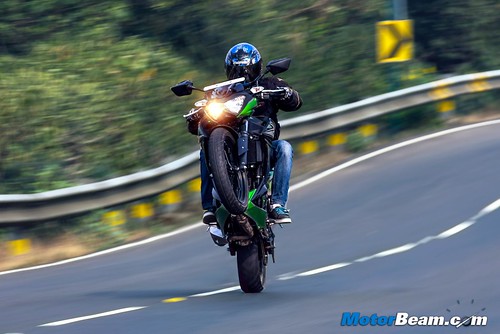 The Z250 has all the power concentrated on the top-end, necessitating you to rev really hard

However, the real grunt only comes once you hit 7000 RPM, post which the Kawasaki Z250 shows urgency and starts moving in a hurried manner. Redline comes in at a catastrophic 13,000 RPM and the motor does rev freely and quickly all the way. If you love high-revving engines, the Z250 is the cheapest bike in the country which offers these shenanigans. What is even better is the snarl from the twin-cylinder heart, it just sounds pure aural bliss with an exhaust note which signifies the bike is going faster than it actually is. There are however very little vibrations at the top-end which shows the fantastic NVH levels of the bike. 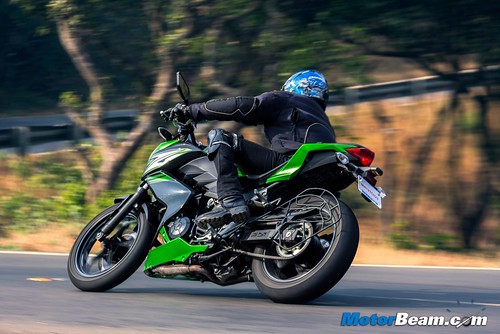 So with such a vast powerband and a massive redline, the Kawasaki Z250 can do crazy speeds in each gear. First gear is good enough for 61 km/hr, second takes you all the way to 88 km/hr while third will make you whizz past 100 km/hr, maxing out at 112 km/hr. Fourth will enable you to hit 132 km/hr while fifth will make you reach 152 km/hr. Top speed is achieved in sixth gear which is 160 km/hr. 0-100 km/hr takes 8.3 seconds which is fast for a quarter-litre bike. The 6-speed gearbox offers smooth shifts and the clutch is well weighed with the lever offering excellent feel. Cruising at high speeds is an issue though as doing 100 km/hr in top gear results in around 7500 RPM on the tacho which is quite high a engine speed for cruising. The Z250 does excel when it comes to mileage and returns more than 30 km/l, resulting in a 500 km plus range on a single tank. 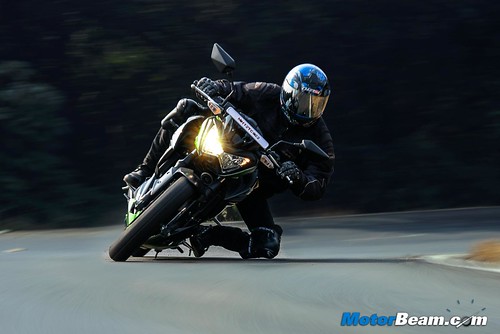 The Kawasaki Z250 has impressive handling and corners with good precision

Riding Dynamics – The Kawasaki Z250 is underpinned by a diamond type steel frame (uses a box section swingarm!) and isn’t too heavy for a street-fighter although it’s not very light either. The motorcycle is eager to corner and offers immense confidence to turn hard through the bends. The straight-handlebar is quick to respond and there is just the right feel coming from the steering. The tyres aren’t the best though and the IRC Road Winners on our test bike showed a tendency to lose grip. The Z250 does remain stable at speed and is very composed although being a naked bike, windblast is a given at high speeds. 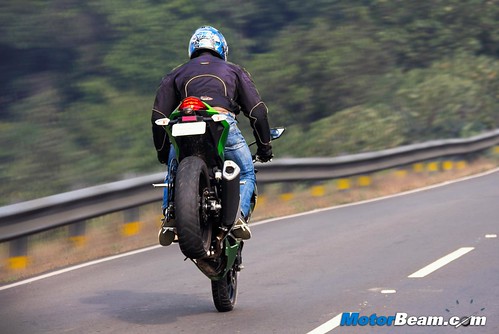 Where the Kawasaki Z250 truly shines is the ride quality. It simply absorbs every bump on the road and when you go through a patch of bad section at speed, its composure isn’t affected one bit. The fantastic ride quality inspires you to push hard without having to worry of hitting any undulation of the road. The black rear monoshock is placed in a way one can’t see it easily while the ground clearance is adequate. Braking performance is good and the Z250 stops without any drama but the lack of ABS in sorely missed as this bike is quite fast by 250cc standards. 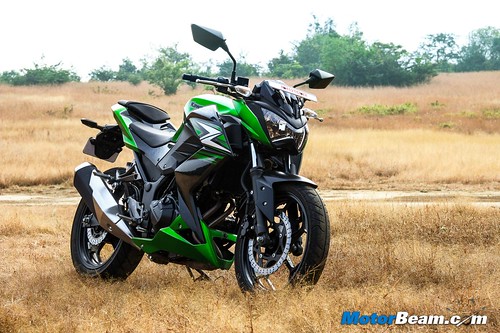 The Kawasaki Z250 doesn’t make much sense at its asking price of Rs. 3.37 lakhs

Verdict – The Kawasaki Z250 is an immensely likeable bike, until you hear the price. At Rs. 3.37 lakhs, it’s Rs. 58,000/- less than the Ninja 300, making the over-priced full-faired machine look well priced. Unlike its now defunct full faired sibling (the Ninja 250), the Z250 isn’t the cheapest twin-cylinder bike on offer in India (that honour lies with the Suzuki Inazuma which is on its way out). Kawasaki recently unveiled the Z300 and that motorcycle would have justified the Z250’s pricing, as it has a bigger engine with more power. While Kawasaki’s entry-level bike in India is a comfortable and refined machine with impeccable quality, its pricing suggests anything but affordable. For the extra amount you pay for the Ninja 300, you get a full faired sports bike (which looks like a mini ZX-10R), a bigger engine (with more power and torque) and a slipper clutch among other things. While neither bikes get ABS, not even as an option, if you willing to spend as much for the Z250, it’s best to stretch a bit and get the better Ninja 300.

The Kawasaki Z250’s lack of ABS and heavy pricing really spoil the otherwise interesting package. For the asking price, the Z250 just doesn’t cut it and you end up paying more for brand Kawasaki than the motorcycle itself. 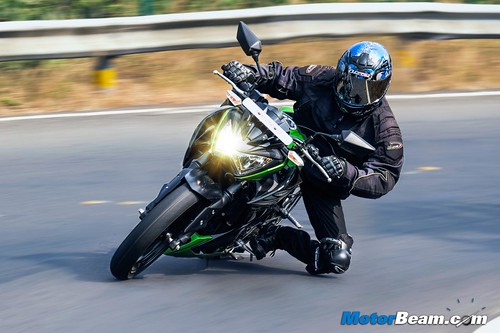 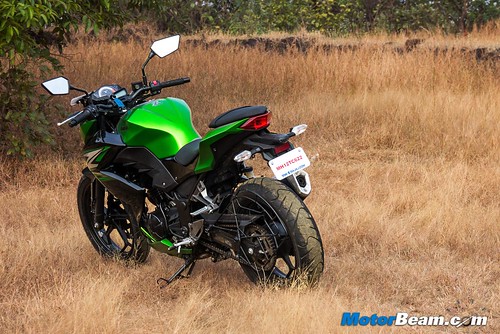