When you talk about challenges in the motorsport arena, the thing which almost always comes to mind is speed. Everyone judges victory by how fast they reach the finish point. This has always been the norm but things take a twist for the better in Mahindra’s TSD challenge. TSD stands for Time, Speed, Distance and while many might not be aware of how it works, the concept is interesting indeed. This year, the Mahindra Adventure Monsoon Challenge entered its fifth season with India’s biggest TSD rally heading from Bangalore to Mangalore. With an interesting banner on board that says “The rain will wash away everything including your ego”, let’s take a quick look into what this rally is all about. 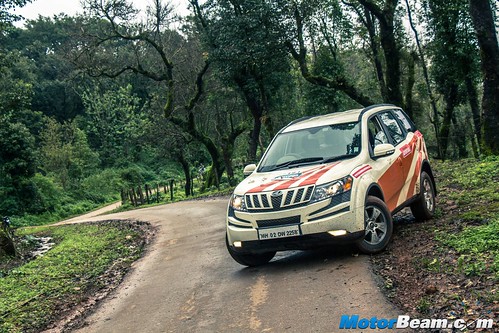 Mahindra Adventure conducts a range of events throughout the year and participation is impressive with owners showing a lot of enthusiasm with their utility vehicles. But in all fairness, it’s not just UVs that participate in Mahindra’s Adventure, we also saw a few Veritos in the Monsoon Challenge. Other than having fun, a big motivator is the prize money, Rs. 4 lakhs if you win which is a big amount indeed. But how easy is it to win? Does one just have to drive flat out and reach the final point in the quickest time? Sounds easy, no? But it isn’t. 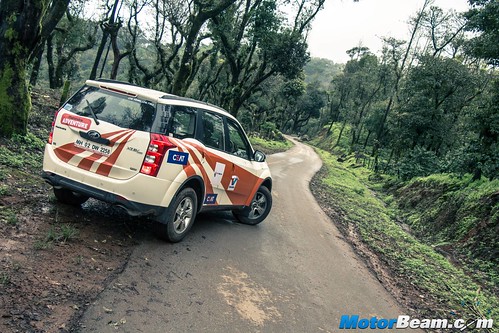 When we talk about TSD, it’s not just the speed but also the time and distance that is taken into consideration. So one needs to cover a said distance in a particular time, thereby adjusting the speed to be not fast or slow either. One has to reach checkpoints which are of two types, the yellow ones have you noting down your time while the red one has officials who note down your time (you have to come to a complete halt there). Now this does sound difficult but if you have patience, it’s quite easy. Mahindra does give you a handbook which marks the distance and recommended speeds between checkpoints and then you have a navigator with you to help you with the turns. 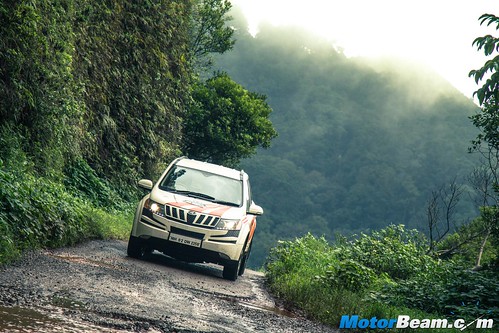 The XUV was at home on all kinds of roads, took broken tarmac with confidence

The Monsoon Challenge started off from Orion Mall and we headed to Shimoga on day one while on day two we left from there to Mangalore. But it’s not all smooth tarmac as the route takes you through B roads, highways, villages, rough roads to no roads and of course the fantastic Western Ghats which have sights to behold. That’s almost every kind of terrain Indian roads have to offer in a matter of just two days, interesting. 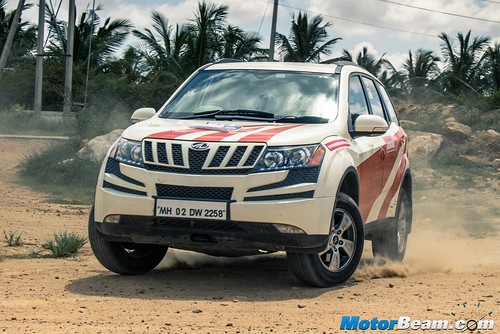 Thanks to a monocoque layout, the XUV500 has good handling with less roll

Driving a UV over the worst of roads doesn’t seem like a difficult job but when you factor in requirements of time, speed and distance, things don’t appear as easy. But what if you are early or late to a checkpoint? Then you get penalties and they are added to your final time. If done wrong, one can get penalties which can run into hours. While arriving late has never got anyone applauds, in the Mahindra TSD, arriving earlier gets no accolades either. Thus patience is the name of this game. 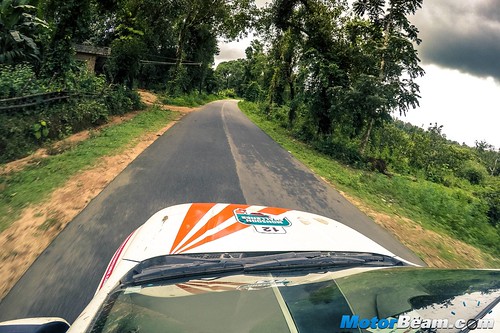 The roads were mostly empty with no one else in sight, made driving very easy

Of course there are seasoned experts who participate in this event and they easily ace the challenge but fret not as they are classified into the professional category, newbies still have hope as they have to fight it out in the amateur category. Then there are various other categories like corporate, couple, ladies and media (the one under which we participated). For the monsoon challenge, Mahindra gave us the pre-facelift XUV500 W8 (AWD version). 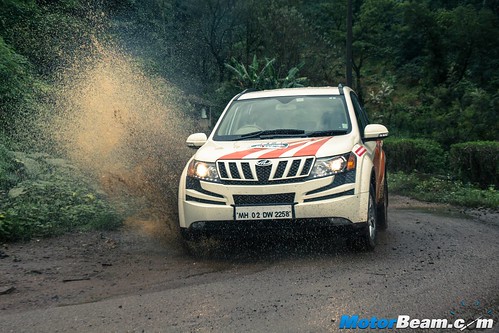 Due to the monsoon, there were a ton of big potholes which weren’t visible easily

Driving in the Mahindra TSD Monsoon Challenge is an interesting experience

The real rally started off from the outskirts of Bangalore and you get the manual which tells you where to turn and which checkpoints to stop at, it also mentions the speed to be maintained which never exceeds 50 km/hr (there are free-zones where you are free to do the speeds you like). Since everything is mentioned kilometre wise, you might think it’s darn easy as you reset your trip meter and just follow. The problem is, one wrong turn and then you need to calculate everything in your mind and that’s what happened with us too. 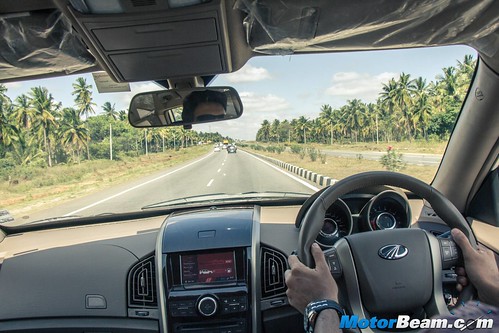 Starting off a bit late, we were in a hurry to make time and because of that we took a few wrong turns and were in a mess of sorts. After patiently driving for sometime by keeping our speeds in check, we let loose the Cheetah and started to overtake other participants and were impressed to see them not budge one bit, almost all of them kept their cars under 50 km/hr and thus their penalties to a minimum too. Meanwhile we were flying in the XUV500 and although we didn’t have victory on our minds, we were thoroughly impressed by our vehicle, it just took bad roads in its stride with such composure, although there were plenty of noises but the car worked flawlessly all throughout. 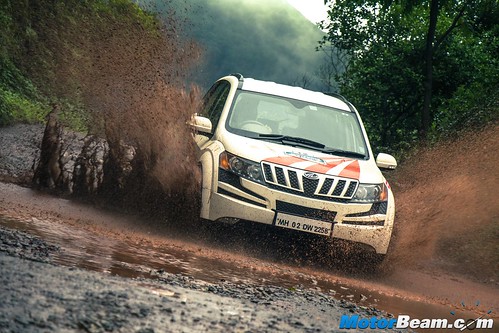 Splashing water is always fun, plenty of such opportunities at the Monsoon Challenge

So it won’t be wrong to say, the Mahindra Monsoon Challenge is indeed a challenge but one which not only keeps the competing spirit high but also instils patience in the driver, something of big use in our daily city grind. By participating in the TSD rally, we not only learnt this interesting form of racing but also put the Mahindra XUV500 through a slew of challenging situations, including taking it airborne. The first monocoque car from the company impressed us thoroughly and my navigator who wasn’t a big fan earlier, now really appreciates the vehicle for its ease of driving, punchy performance and loaded gizmos.

Mahindra Adventure is doing a fantastic job by organising interesting events for its customers. Right from Thar owners to people whose car wasn’t even a month old, everyone was enjoying the TSD event. 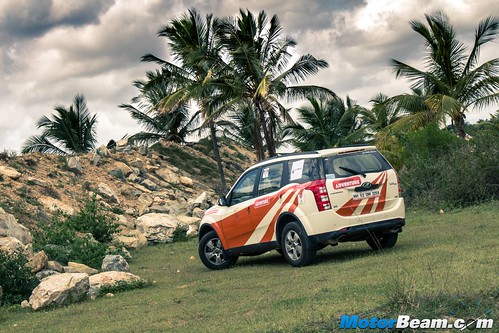