Running against the tide, Mercedes-Benz proved its critics wrong who openly stated that cars like the A-Class are a miss-fit for India as buyers want to be seen in everything but a hatchback. The success of the Mercedes A-Class is testimony to the brand pull of the Stuttgart automaker. After launching the car a couple of years back, the company was quick to bring in the Edition 1 model last year and has now given the diesel A-Class some updates, in-line with customer feedback. The first of what Mercedes likes to call ‘New Generation Cars’, the baby Benz is now even better than before. 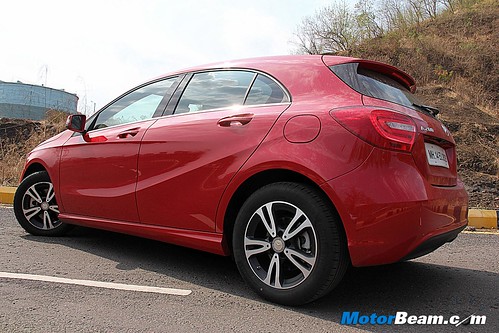 Exteriors – The Mercedes A-Class has always been a looker and those attractive LED headlights, sporty profile and 302-pin diamond grille continue to induce stares. The car doesn’t get any updates to the exteriors, other than new alloy-wheels as Mercedes has gone a size smaller with the rim size. Now the new wheels don’t fill the wheel arches quite as well as they are 16-inchers whilst the old model used sportier 17-inch wheels. The A180 badging has now been replaced by the A200 moniker on the tailgate while the vehicle also gets a panoramic sunroof. The mirrors are now body-coloured while on the older car, it was finished in gloss black. 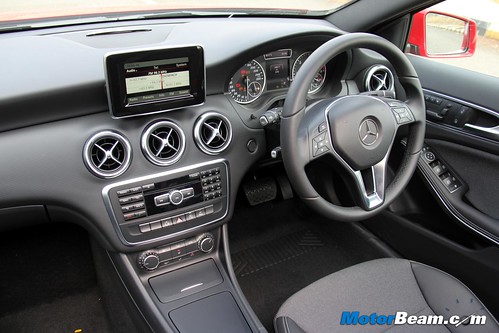 Interiors – Many of the features from the Edition 1 limited edition model have trickled down the A200 CDI, so you get a reverse parking camera with guidelines (moves with steering input), rear seat centre arm rest with cupholders and memory seats for the front co-passenger seat. Other changes include the addition of front parking sensors, which surprisingly isn’t offered on the bigger GLA. Cabin quality remains top notch and there is quite a lot of equipment on offer, the interior itself feels sporty with the dashboard having a very attractive design. What we don’t like is the COMAND system which doesn’t feel as rich it should and rear seat comfort is lacking for adults, this is after all a car to drive and not be driven in. 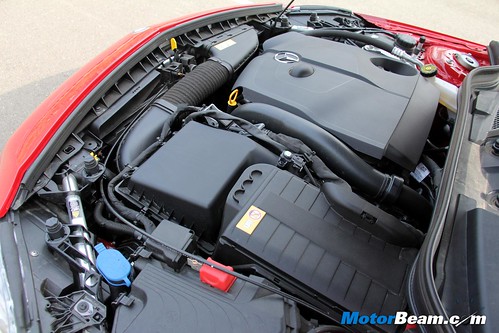 Performance – Since the time we first drove the A-Class diesel, we have been vocal with our disappointment with the engine which lacked punch and we even stated that a much cheaper Volkswagen Polo GT was faster. While the old A180 CDI had decent enough performance, it didn’t have the punch to scorch the tarmac, the new A200 CDI is a big welcome change as the 2.1-litre oil burner now outputs 134 HP between 3600 to 4400 RPM (a 27 HP increase) and 300 Nm of torque between 1600 to 3000 RPM (up by 50 Nm). As soon as you get to the wheel of the A-Class, the added output is immediately apparent as the Benz now feels so much more eager. 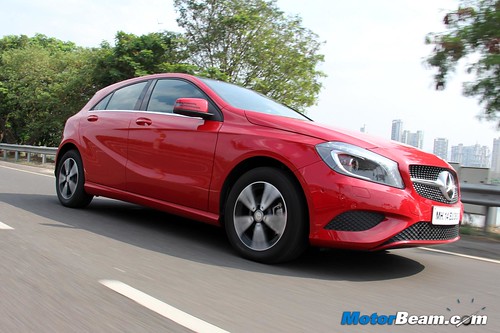 In spite of the increase in output, torque steer isn’t much and the A200 CDI launches smoothly

Sharing its tune with the GLA, the A200 CDI has good low-end performance but it’s really the mid-range where the meat of the action lies. Top-end isn’t exciting though as post 3500 RPM the motor starts to dwindle, redlining at under 4800 RPM. There are three modes on offer which alter the way the powerplant goes about with its revs, the E or Economy mode ensures short shifting (there is an Eco start and stop system too) while S or Sports mode takes the car to the redline to extract all of those horses. Meanwhile in M mode, you can manually take control of things and shift cogs using the steering mounted paddles, the 7-speed box shifting on its own when the limiter is reached and you don’t upshift. The transmission isn’t particularly quick to respond, so it won’t give you a gear lower when you so want it, it does work with smoothness though. 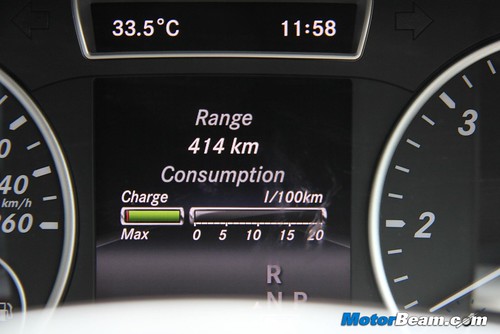 A new charge meter has been included, alternator gets charges when braking

Slapping on our VBOX and doing multiple runs, we achieved a best time of 9.04 seconds for the 0-100 km/hr sprint which is more than a second quicker than the old A180 CDI which we timed at 10.12 seconds. The diesel A-Class could be quicker still but takes an additional upshift to fourth to reach the ton. Although NVH levels are good, the big diesel motor is vocal in the top-end, something which shouldn’t bother the young buyers of this car who would actually like the sound. 100 km/hr in top gear results in 1600 RPM on the tachometer, so a prod on the big pedal is enough to make quick overtakes as the increase in power has given it ample reserve to whizz past traffic. Top speed is a claimed 210 km/hr. 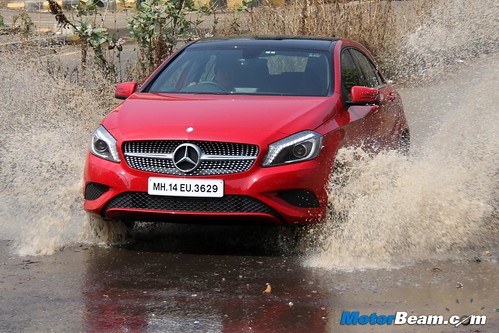 The improvements in ride quality is much appreciated, it’s now suited for Indian roads

Driving Dynamics – The improvement in the ride quality on the Edition 1 variant gets carried over on the A200 CDI so you get a softer suspension set-up which is more apt for Indian roads. The car has an increased ride height and higher profile tyres (205/55/16 instead of 225/45/17) which help tremendously in giving the A-Class a composed ride over most of our roads. One need not slow down considerably over bumps as the A-Class does a good job in cushioning occupants from what we like to call ‘far from perfect tarmac’. Handling has always been a forte of the A-Class and it continues to offer an engaging experience around the twisties, being eager to dart into corners with speed, keeping its line and offering good feedback from the steering wheel. Braking performance is as good as always and so is the stability when you drive fast on the highway. 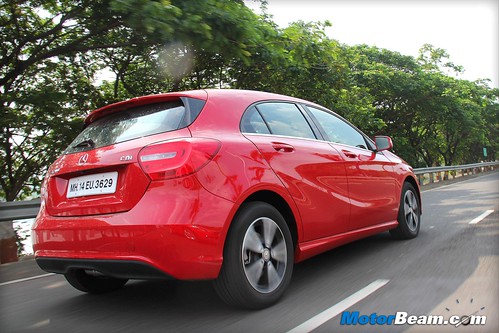 Mercedes has made the A-Class a better deal; a facelift is also on the cards

Verdict – The Mercedes A-Class has always been the pick in the luxury hatchback space and with the changes made to the diesel model, it becomes even more attractive than before. We have lived with the A-Class earlier as it was part of our long term fleet and our glad to say that the baby Benz is now a more complete vehicle, the added output from the engine, improvements in ride quality along with the increase in equipment goes a long way in making the A-Class appeal as much to the head as it does to the heart.

The Mercedes A-Class is now more suited to the driver with the much needed increment in performance. The addition of equipment makes it worth the addition Rs. 1.7 lakhs over the A180 CDI which the A200 CDI replaces. 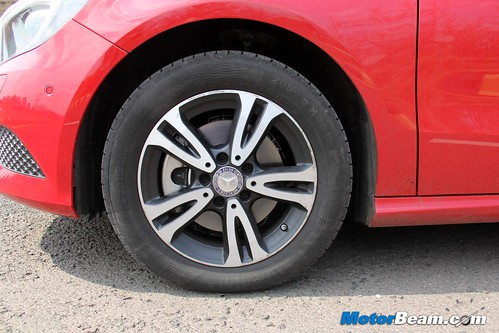 High profile rubber a big boon; notice front parking sensors which are missing on the GLA

* Stunning looks, a car which is sure to turn heads no matter what
* Improved ride quality and higher profile tyres means the A-Class is home on broken roads
* Added equipment makes the baby Merc feel worth the asking price

* Placement of spare tyre hinders usability of the boot

News highlights of the day include Triumph, Ola, Royal Enfield and Skoda. Triumph - The premium British bike maker is about to launch the Tiger   END_OF_DOCUMENT_TOKEN_TO_BE_REPLACED

Royal Enfield has developed new 350cc platform for future bikes. The coronavirus has let down the auto industry and the buyer sentiment.   END_OF_DOCUMENT_TOKEN_TO_BE_REPLACED

RE to bridge the gap between 350cc and 650cc motorcycles. Royal Enfield is the mid-size king in the domestic market. Their 350cc bikes are   END_OF_DOCUMENT_TOKEN_TO_BE_REPLACED