The MINI Cooper may seem like a regular car in countries like the United Kingdom, but here in India, it is a very niche product and it is seen in limited numbers. The vehicle is positioned in the middle of the luxury segment and it competes with the likes of the Mercedes C-Class and BMW 3-Series if we consider only the pricing part. MINI entered India long back and all of their products were made available via the CBU route (MINI did start CKD operations for the Countryman). The 2015 Cooper has now been launched and it comes in the Cooper D 3-door, Cooper D 5-door and Cooper S variants. The MINI is also available in the Countryman and Convertible variants based on the previous generation. Except the Cooper S and Convertible, every other variant comes with a diesel engine. After having a go in the 3-door Cooper D, we drive the 5-door and find out what type of a car it is.

Motor Quest: The MINI Cooper is an iconic vehicle and it comes with some interesting history. All four members of the Beatles owned a Cooper and George Harrison had a custom paint job on his car too. The vehicle has a front wheel drive layout and the engine is positioned sideways, which translates to better cabin space for its passengers. 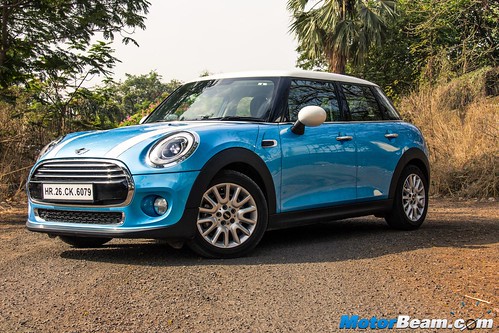 Exteriors – Ever since the introduction of the first ever MINI, the vehicle has evolved a lot when it comes to looks and styling elements. However, it continues to carry its retro theme and the hatchback looks quite chic. The front is all curvy while the side profile is straight without any fussy lines or curves which is a good thing. The curvy theme is carried over to the rear too. The company offers a lot of customisation options for the exteriors so buyers could select a contrasting roof colour and/or racing stripes in either black or white colour. So if you’re picking up a MINI, you could actually spec it to your own tastes while also making it look a bit exclusive. The alloys come in a silver finish unlike the Cooper S which gets black alloys. 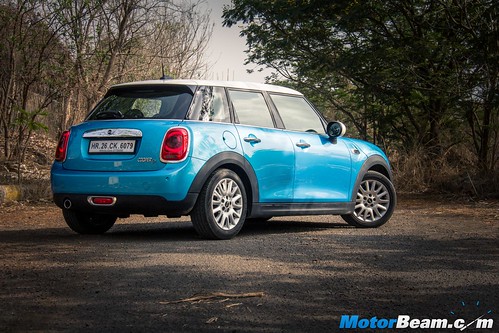 The Cooper is a great looker and has a lot of road presence. The vehicle is offered in a lot of eye-catchy colours too which just increases the attention-seeking value of the car. We drove the MINI inside the city as well as on the highway and on-lookers came up to us asking various questions like, “What car is this?”, “Is it imported?”. We even spotted the occasional guy clicking a picture of the car while waiting at a signal. The Mercedes A-Class too is a great looker but it carries sharp styling while the Cooper’s retro design theme appeals more. 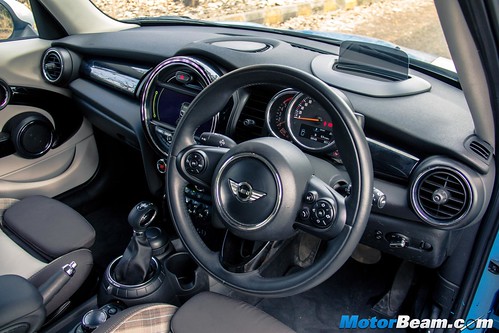 The interiors are well-designed and have rich materials

Interiors – Open the door and step inside and the first thing that you notice is that the curvy theme is carried over to the interiors as well. The dashboard and door panels of the 5-door Cooper get a dual-tone colour scheme of black and beige. This combination adds a pleasant feel to the cabin. The centre of the dashboard gets a large infotainment system which displays a lot of useful stuff like information about oil level, air pressure, service reminder, music source, phone pairing, lighting options and a lot more. The infotainment system is controlled with the help of a knob that is placed between both the front seats and we found it to be an ergonomic issue. It becomes quite difficult to change music or look up some information while you’re driving. MINI could have also come up with a UI that is slightly less complicated or even a touchscreen interface. 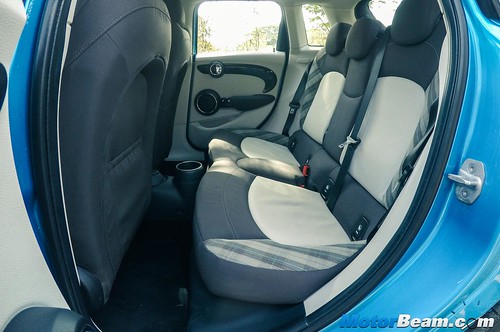 The seats are very well shaped and offer good comfort and support. The front driver’s seat gets a lot of adjustment options and finding the perfect driving position is easy. The front passenger seat too offers very good comfort. The steering wheel feels good to hold and it offers tilt and telescopic adjustment. Behind the steering is an HUD but if you keep the steering at the topmost position then the wheel blocks the speed display so looking at the HUD becomes quite a task. The instrument cluster is again circular and everything is nicely positioned there. Space at the rear is strictly average The 5-door version offers slightly more legroom than the 3-door version and that’s it. The windows are compact in size and the front and rear glasses are also not too big. However, the Cooper offers great all-round visibility and driving this car in crowded cities is an easy task. The vehicle doesn’t come with a rear camera (optional) but it does have basic parking sensors. The projector headlights and fog lamps are very powerful, no complaints on this front. The pedals have perfect positioning and the dead pedal is decently big too. 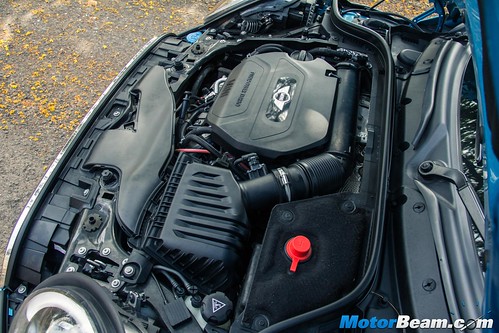 The 1.5-litre 3-cylinder oil-burner is quite silent on the inside

Performance – The MINI Cooper 5-door diesel is powered by a 1496cc engine that churns out 114 BHP of power and 270 Nm of torque. On paper, this power figure may sound just ordinary but the Cooper is quite fun to drive. Step in to the car, press the brakes and flick the start button and the oil burner fires up without much clatter. Slot the 6-speed Steptronic transmission into D and just drive off. This is when you feel that power is available instantaneously and always on tap. Put pedal to the metal and there is a slight lag and then the Cooper just takes off! In our VBOX tests, it accelerated from standstill to 100 km/hr in 9.8 seconds while the company claims 9.5 seconds. 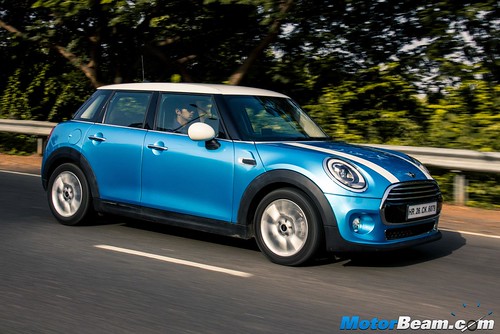 Cruising on the highway is very easy because the engine offers peppy performance and overall the vehicle is very sprightly to drive. Below the gear lever are two modes – Sport and Green (other than the normal mode). First we tried out the Sport mode along with slotting the tranny too in to the Sport mode. The screen flashed ‘Maximum Go-Kart Feel’ which just made us grin. The steering became a bit heavier and the Cooper revved in glory all the way to the redline. There was a slight drop in mileage but when you’re having so much fun, it doesn’t really matter. 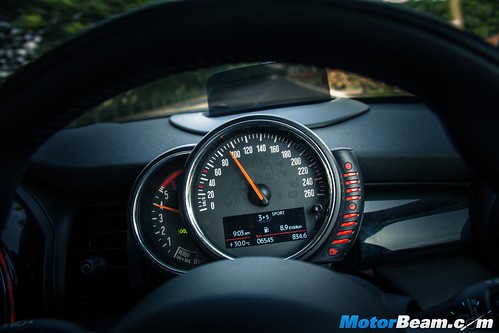 While the Sport mode is fun, the Eco mode gives marginally better mileage

Now it was time to try out the Green mode or should we say the Eco mode. Pressed the Green button twice and the centre display lighted up in green colour. The instrument cluster too started displaying a new bar which showed us how much more mileage would we be able to extract out of the car. Frankly, the Green mode doesn’t really hamper performance and the Cooper still drives brilliantly. The increase in fuel efficiency is also marginal. The MINI Cooper diesel has an ARAI certified fuel efficiency of 21.15 km/l but we managed to extract 12 km/l while driving it aggressively and around 14-15 km/l with sedate driving. The 6-speed gearbox is butter smooth and gear shifts happen nicely. It also comes with a Sport mode and a manual mode. However, we did miss paddle shifters on this one. 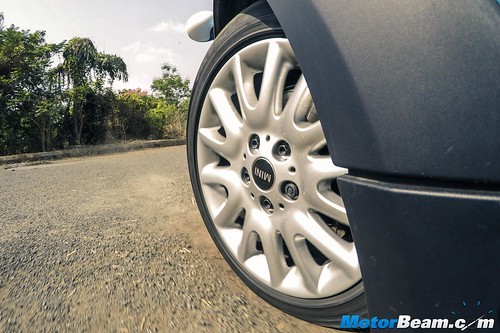 The ride quality is pretty much composed although a bit stiff

Driving Dynamics – Handling is one of the biggest USPs of the MINI Cooper. Sure, the Cooper S is more fun but the Cooper D is no less. The steering is direct and offers superb feel. It is a bit stiff but we like it this way. The car moves on straight roads like a train on rails. Even at speeds well above the ton, the vehicle remains nicely composed and never did we feel that it’ll go out of control. We had fun attacking the ghats and twisties around Lonavala and the MINI negotiated all of them with quite ease. With the good torque delivery that the Cooper has, we did manage to make the wheels screech while taking corners on full throttle. 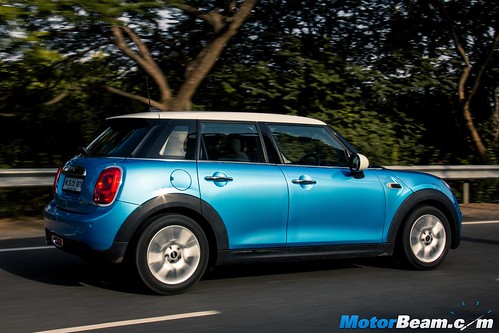 Sharp handling has always been a MINI trait

There is hardly any body roll in the MINI Cooper thanks to its very stiff suspension. Yes, if you’re driving a performance–oriented vehicle, you just cannot complain that the suspension is stiffly sprung. However, the 2015 Cooper still has a better set-up than the previous Cooper which was much stiffer and had a bone-jarring ride. The vehicle takes bumps easily but don’t get surprised if you’re thrown around a bit when you attack a nasty pothole at a decently high speed. The vehicle doesn’t come with any spare wheel or even a puncture repair kit. The run flat tyres can be driven for a fair distance even after being punctured but then there is no choice except replacing them. Braking performance is strong and it sheds speed quickly, having a feedback rich pedal bite. 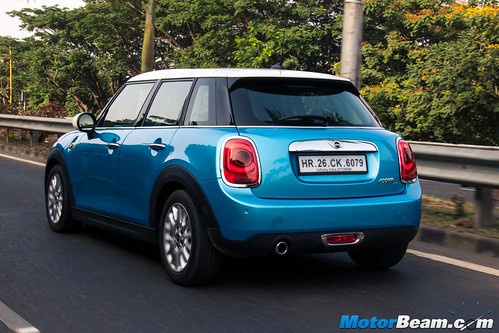 Safety and After Sales Service – The 2015 MINI Cooper diesel comes with 6 airbags, ABS, EBD, ESP, Brake Assist, central and remote locking, child locks and an engine immobiliser. The build quality is also very strong. The Cooper scored a decent 4 stars in the Euro NCAP crash test though the previous gen MINI scored 5 stars. MINI has a limited presence in the country and the company doesn’t have many sales and service outlets in India, especially in tier-2 cities. 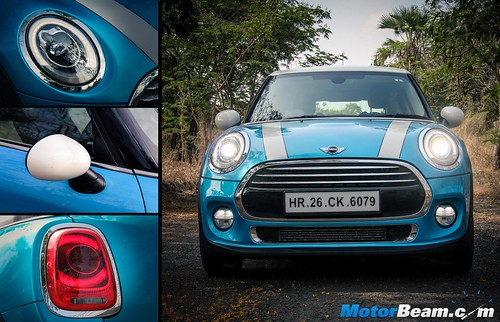 Verdict – Without doubt, the MINI Cooper is one of the most fun to drive cars around. This little hatchback doesn’t really have any true rivals in India but we’ve seen buyers usually comparing this to the Mercedes A-Class and BMW 1-Series. However, the MINI Cooper offers more snob value than these Germans. Now only if Fiat could quickly launch the 595 Competizione in India, things could get a bit interesting. The Cooper 5-door version is for those who want an enjoyable car but also want to ferry their kids around. It makes a great practical choice for modern families who can afford to pay for this piece of luxury and adrenaline.

The MINI Cooper 5-door is a practical offering as it can seat four (the rear seat is strictly for kids) yet is very frugal. The vehicle managed to impress us a lot but the only thing going against it is the CBU positioning which makes the vehicle a bit too expensive to buy thanks to our crazy taxes and duties. With the crazy levels of grip the tyres offer, the very much sorted ride and handling, the vehicle is sure to make anyone smile. 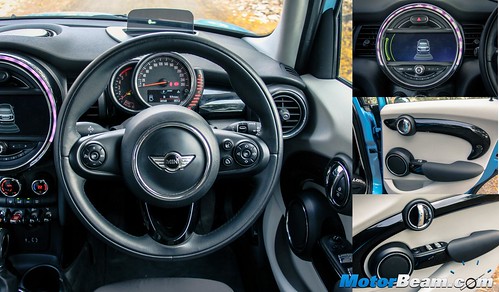 The curvy design theme seems to have been taken a bit too seriously, looks great

* Amazing road presence and a great attention seeker everywhere
* Handling is precise and that’s what makes the MINI fun to drive
* Punchy engine that offers instant power when asked for, in spite of being a 3-pot diesel 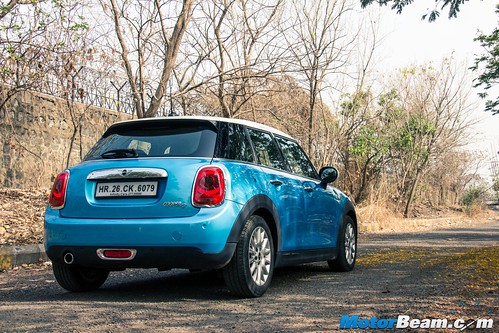