The BMW X1 has grown in size, is more mature now and is a better package in the segment

When BMW launched the X1 for the first time in India, the vehicle received a very mixed response because it was marketed as an SUV but it looked like more of a crossover due to its dimensions. However, thanks to its VFM pricing for the lower variants, the German automaker was able to sell pretty decent units of the X1. With the crossover being past its lifespan, BMW has launched the second generation X1 and we are sampling it here today to see whether it’s better than the previous model or not.

Motor Quest: The X1 sits at the bottom of BMW’s SUV portfolio and provides buyers an entry point to the elite club. BMW launched the first generation X1 in 2010 while the second generation was launched in 2016. 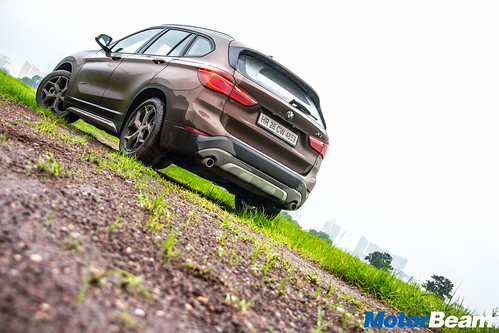 Exteriors – On the outside, the new X1 looks massively different than the older one and the dimensions seem much more appropriate and SUV-like now. The X1 looks very mature and due to its larger size, a lot of people mistake it for an X3. The front has typical BMW styling with the trademark kidney grille now getting gloss black surrounds. The alloys on our test car had an eye catching design. It is the side profile where the SUVish intentions of this Bimmer are shown. The rear feels classy and the overall stance of the car makes it all the more desirable than the outgoing X1. 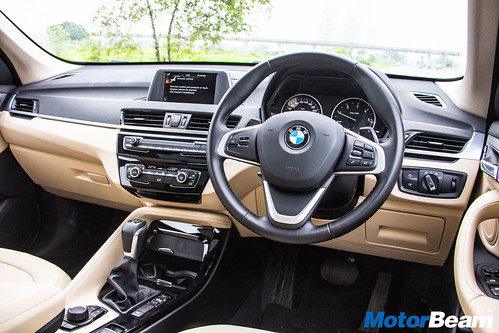 Interiors nicely built; evident that it is one of the cheapest BMWs

Interiors – Looking at the generous dimensions of the vehicle on the outside, I was a bit surprised when I opened the door to step into the driver’s seat. The cabin feels compact and even the dashboard and centre console seem to have a compact layout. Just like any other BMW, ergonomics are spot on and the dash is very driver centric. Materials used all over feel very upmarket and premium but when you drive this X1 back to back with any other car from the same stable, say the 3-Series, that is when you realise how superior the other car feels. 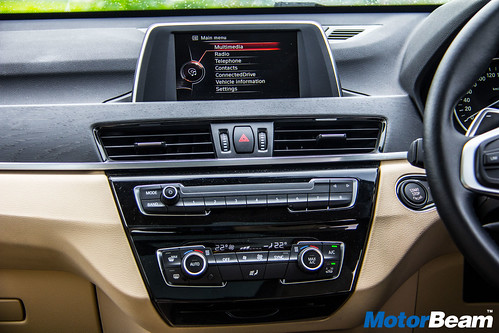 Space is decent enough, good number of storage bins too

The interiors are practical and neatly laid out; good amount of storage spaces

There are lesser number of buttons on the steering wheel, centre console, etc. and even though you do get a lot of features, the X1 does make you feel evident that yes it is one of the cheapest BMWs around. Even the round knob that is used to control the infotainment system is smaller in size. I found the front seats very comfortable and finding that perfect driving position is super easy thanks to the electric seat controls. The driving position itself feels much like that of a crossover and if you’re expecting a proper SUV-like driving position that feels commanding, then you’ll be disappointed. 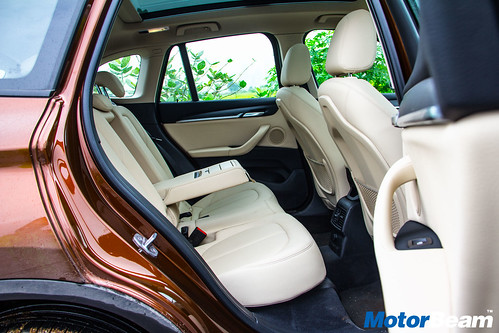 All round visibility is great and the seats are comfortable

The rear seats are comfortable too and space is better than the old X1. You also get a basic centre armrest at the rear. The best part about the new X1 is the large windows that BMW has endowed and it makes the cabin feel very airy and lends a positive vibe. Gone is the claustrophobic feel that you get in cars with smaller glass areas. If you’re buying a car for Rs. 40 odd lakhs you expect it to have a ton of fancy gizmos (a la Skoda Superb or Ford Endeavour) but BMW is known to skip a lot of features from the standard equipment list and the X1 is no different. It misses out on vital stuff like a parking camera. It doesn’t even have cruise control. 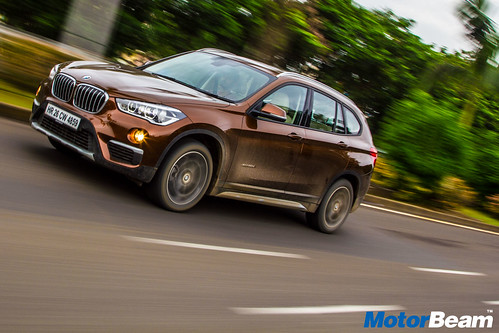 Performance – The BMW X1 comes with the same 2.0-litre oil burner that also provides grunt to the 3-Series. The new B47 unit has improved over the older N47 plant and this time it comes mated to an 8-speed automatic transmission from Aisin rather than ZF. Acceleration pace is pretty good and 0-100 km/hr comes up in 7.8 seconds which isn’t too bad. The biggest change here is the fact that the new X1 is a darn front wheel drive car while it also gets an AWD option. Also gone is the manual handbrake of the older model which is replaced by a puny little button. A little less sideways fun now, eh? 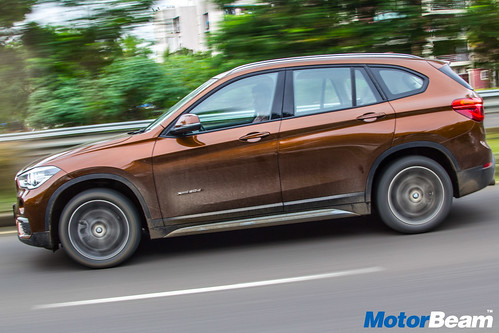 Power delivery is linear and the gearbox is smooth

The diesel engine puts out 190 BHP of power and 400 Nm of torque. Switch on the car and start driving and the first thing you notice is that the engine feels a tad bit noisier in the cabin, especially compared to the 320d. There is some amount of turbo lag which isn’t really bothersome and the X1 chugs around nicely with low throttle inputs needed inside the city. The Aisin tranny is good at its job and cogs are changed smoothly. 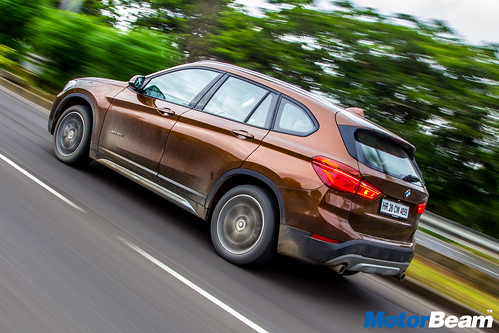 On the highways, the BMW X1 properly comes to life when the RPM needle starts hovering around the mid way mark. There is a very good surge of power and the compact SUV gathers pace quickly enough to touch 200 km/hr without making you wait for long. Eco Pro mode is best used in the city when you want to extract a couple of extra kms by compromising a bit on the power delivery. Comfort mode as you all know is suited for both city as well as highway driving while Sport mode holds on to the RPMs much longer, thus providing power as soon as you mash the throttle. Expect a fuel efficiency of 12-13 km/l if driven sanely and if you’ve had Redbull before stepping into the car then your wings (and fast driving!) will bring the efficiency down by a couple of kms per litre. 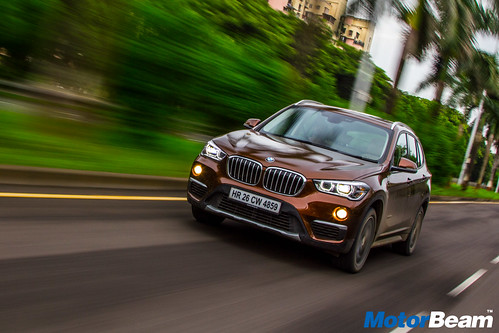 Ride isn’t the best, handling is fun but some body roll is present

Driving Dynamics – Being in the driver’s seat of a BMW naturally gives you a lot of extra confidence because you know by default that the car will have its dynamics nicely sorted. The same thing happened when I took a corner at a speed I can’t mention here unless I want my mom to make me resign from my job. While our dear editor Faisal held on for life with both his hands on the ceiling grab bars, the X1 attacked the corner perfectly well maintaining it’s line. Sure, there was some screeching and the TCS light went crazy, the Bimmer stayed composed and never did it throw tantrums. Ride quality isn’t the best though and while it soaks up minor bumps very easily, the more nastier potholes do manage filter in the cabin at low speeds. At high speeds, the story is completely different and the X1 stays firm. The tyres have splendid levels of grip which we found out during our handling and braking tests. 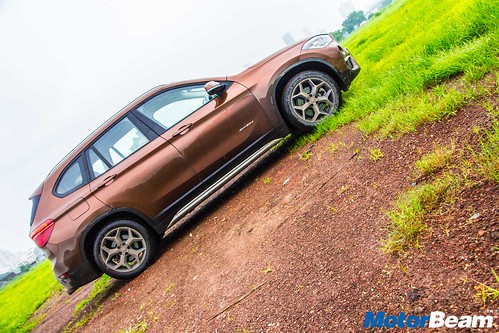 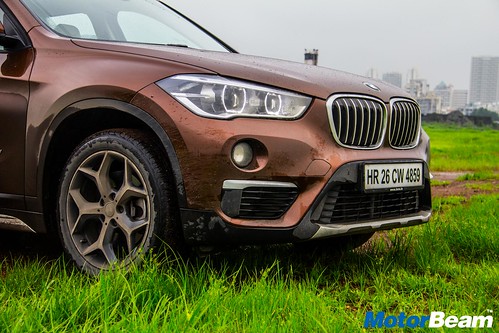 Verdict – If you look at the X1 as an entry-level BMW, you won’t be disappointed at all because the car has evolved very nicely from the previous generation and it feels very good as an overall package. Yes, it misses out on some very vital equipment but this shouldn’t really be a deal breaker. The X1 also gets an AWD system now which makes it a proper compact SUV. The 2016 BMW X1 makes for a splendid buy if you’re looking at entering the elite club but don’t want something as basic as a 1-Series or something. Even when compared to rivals, the X1 feels more of an SUV compared to the Mercedes GLA while the Audi Q3 is something that’ll give a tough fight to this Bimmer. 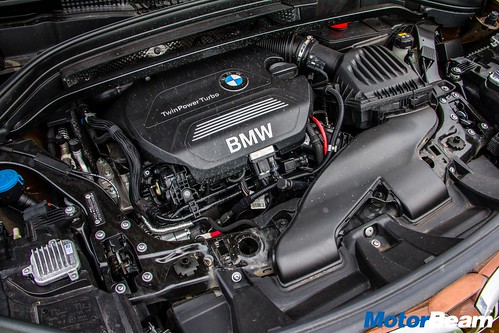 * The design has evolved and looks better now
* The interiors have gone a notch up
* Diesel engine has a good blend of performance and economy
* Fun to drive? Yes!

* Misses out on some important features 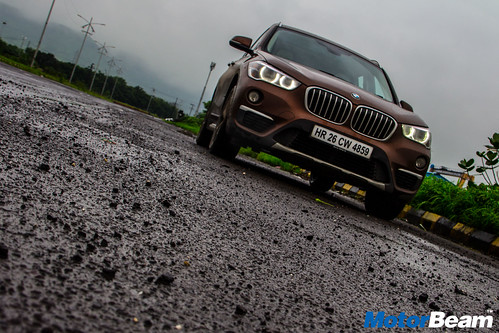 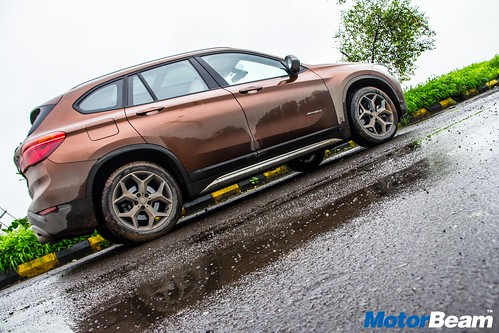 “BMW invented the luxury compact SUV segment with the X1 and with the launch of the Audi Q3 and Mercedes GLA, the Bavarian vehicle lost its importance. But BMW has come back with full swing to make the X1 the new king of the segment. The design from bigger X models gives the car good presence while the vastly updated interior stands out. It might not drive with the same feel as the old X1 but the new model is a step in the right direction.” – Faisal Khan, Editor, MotorBeam.
“The second generation BMW X1 took me by surprise. It feels like a proper and complete package and it has pretty decent dynamics to boast off too. Apart from that, it looks much bigger now and that might make the snob-value-hunters feeling happy. However, compact SUVs have limited capabilities off the road and for the price that the X1 is offered for, I might actually pick the Ford Endeavour 3.2! Yes, you can call me insane for that.” – Parth Gohil, Senior Road Tester, MotorBeam.