It all started when Hero and Honda split their ways for good. Hero was renamed to Hero MotoCorp and things have looked pretty good since then. The Maestro was one of their first in-house products since the split-up and brought the Indian motorcycle giant some decent success in the scooter market. The Maestro Edge is something that carries the game a step forward for Hero. While its selling numbers aren’t as much as its cousin, the Honda Activa, it packs a few features that give it some edge over its competitors.

The Maestro Edge has been derived from the Maestro which was first launched in 2012 after the birth of Hero MotoCorp. It was very similar to the Honda Activa in all aspects and carried a differently tuned Honda engine. The Maestro Edge that was launched in September 2015 carried an all new 111cc engine and a lot more goodies which marked the beginning of Hero’s innovative market strategy. 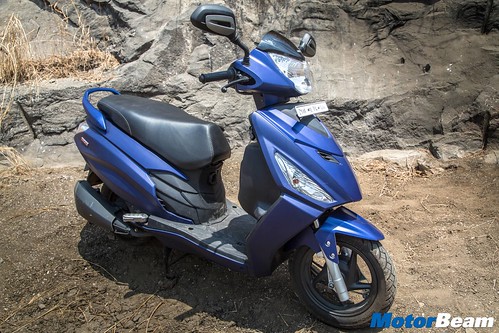 Styling – Since this one is called the Maestro Edge, it carries an edgier design in comparison with the regular Maestro. The styling cues resemble its sibling in many ways, yet the cuts and creases distinguish the Maestro Edge. It also gets a cute little windshield over the headlight which is barely noticeable at first. The front gets new style indicators and a stylish small grille giving it a contemporary look. The mirrors get a dual-tone treatment but are oddly very bulky and don’t go well with the scooter’s overall look. 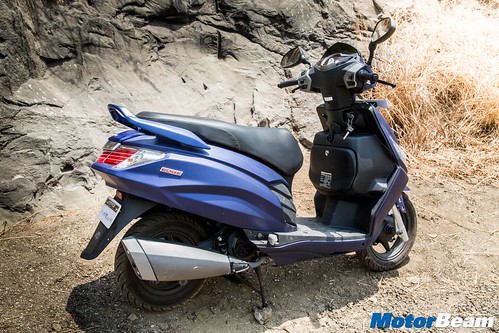 The edgy design is also carried towards the side and moving on to the rear one can notice how subtly the Maestro gets a makeover. The Maestro logo remains the same which gets an additional ‘Edge’ badge under it. The most striking feature is the LED tail-light that gives the Maestro Edge its identity, specially at night. The LEDs are bright and the split design makes them easily noticeable from a distance. Along with this, the Maestro Edge also gets a new grab rail and a stubby looking exhaust. The overall design of the scooter looks quite modern but feels a little boxy, maybe because of sharp edges and the rather bulky headlight assembly. 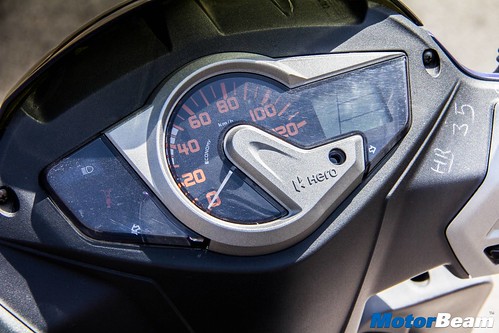 Pretty impressive console for a scooter

Instrument Cluster and Switchgear – The Maestro Edge also carries an analogue-digital instrument cluster, but with a refreshed layout. The LCD to the right of the large speedometer, is also a little different in terms of layout and style. It shows a trip meter, an odometer and the fuel gauge. Interestingly, it also shows a service reminder by indicating a small spanner at the top of the display. To the left is the upper beam signal and a turn signal indicator. Issued in the interest of public concern, the Maestro Edge also gets a side stand indicator, so that’s one less thing people on the streets have to care about. With silver finish panels around the switchgear, the controls do look premium, but the first touch tells a different story. The buttons are different than what are generally seen in other scooters and may give a premium feel but while operation, they lack the necessary quality. They feel very tacky to use and somehow difficult to operate while riding. 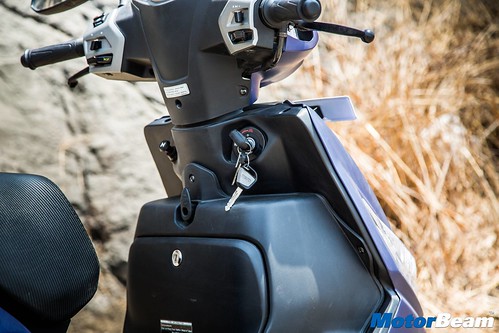 Features – One thing that makes the Hero Maestro Edge have the edge over its competitors is the amount of features that it packs. To start off with, it gets a pilot lamp, a concept which has finally started catching up in scooters. The ingenious keyhole is a rather intriguing device on the Maestro Edge. A simple anti-clockwise rotation of the key opens the seat whereas a clockwise rotation whilst the key is pressed, opens up the external fuel filler cap. Both these operations are impressively glitch free and are actually fun to do. The storage area under the seat gets a small bulb to light it up which means a pretty genius mind at work here. A built in USB port to charge a phone is also a part of the under-seat storage. The top model (VX) also comes equipped with an immobiliser. 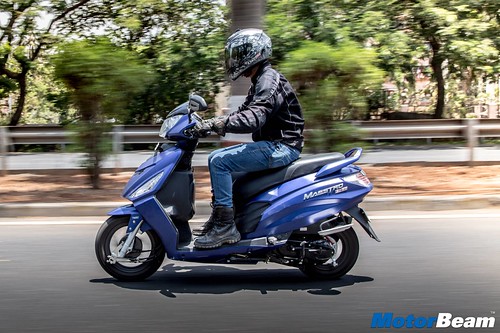 Soft seat and the taller handlebar make for good ergos

Ergonomics – The Hero Maestro edge carries ergonomics like most other scooters in the market. The handle is wide and tall enough to provide sufficient comfort on short commutes. The seat is also appropriately sized and provides a good level of cushioning to the rider as well as the pillion. The seat height at 775 mm may feel a little too tall for shorter riders and the relatively wide body dimensions make it a little difficult to get a firm grip on the ground, especially for women. Our test scooter had an external storage box which made things a little cramped up in the footboard area. 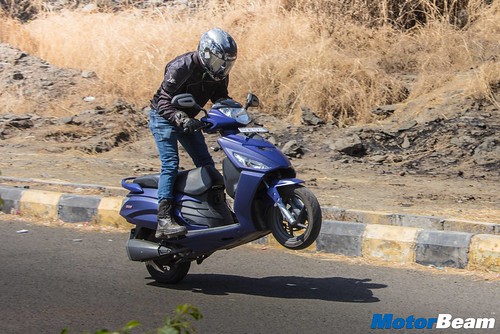 Performance – The Maestro Edge gets an all new 110.9cc engine that has been tuned to give out 8.31 BHP at a rather late 8000 RPM while it churns out 8.3 Nm at 6500 RPM. The power specs look impressive for a scooter in this segment that is ruled by the Activa. The SOHC engine feels a bit lesser refined than the Honda engines in general and initial vibrations are significant. The engine feels very punchy in the initials and the vibrations do accentuate that feel. A dash to 60 km/hr isn’t very smooth as the engine seems to have been tuned for better mileage in the 30-50 km/hr range and therefore loses out on acceleration. 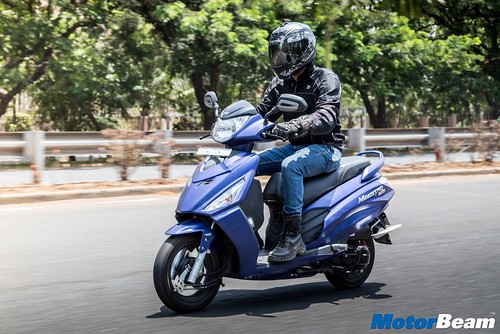 Highway runs were surprisingly easy on the Maestro Edge. It has an impressive punch post 55 km/hr. However, this remains only up to 70 km/hr which is quite okay for a 111cc scooter. Our test scooter managed a maximum of 85 km/hr with great consistency, but the engine got alarmingly noisy. Speeds of 65-75 km/hr feel like home on this scooter. With highway runs most of the time on our test scooter, it returned a rather reasonable mileage of 40 km/l. However, mileage figures of 43 km/l aren’t really the best even when the scooter is ridden in the economy range. 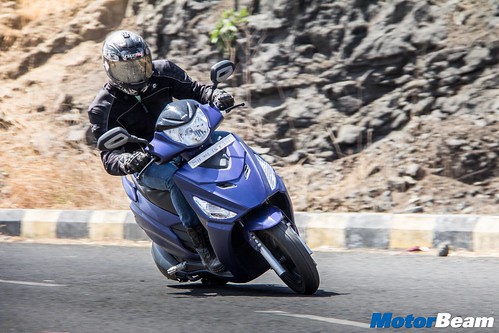 Riding Dynamics – The Hero Maestro Edge has some impressive riding dynamics which could be attributed to its front telescopic suspension. Its cornering ability feels marvellous as the suspension does a neat job tackling the road conditions. That being said, the larger 12-inch front alloy gives it a good balance in corners and at high speeds. The rear suspension is no different than any other scooter and works just fine. 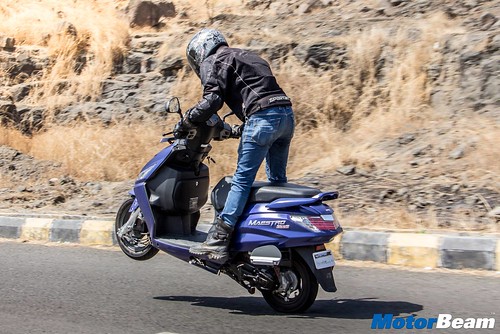 The front suspension has a decent travel

Weighing in at 111 kgs despite a full fibre body, the Maestro Edge feels a little on the heavier side. The wide body also doesn’t make things any better. It feels oddly bulky while riding in the city, though the weight isn’t that noticeable once it is set moving. The Maestro Edge also boasts of integrated braking which is another name for Honda’s Combi-Brake System (CBS). This means that the application of the rear brake would also enable the front brake, thus improving stopping power while reducing chances of a wheel lock-up. The MRF tyres are grippy and should work well in all conditions. 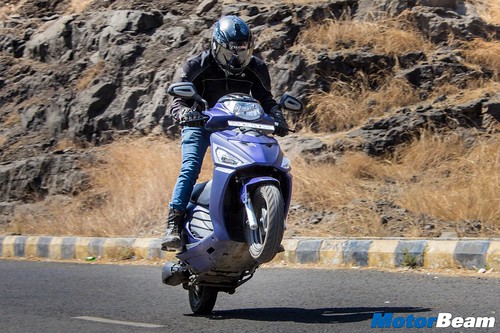 Who says you can’t have a little fun on a scooter?

Verdict – Hero MotoCorp has been trying a lot to get out of Honda’s shadow and this time it has done a really commendable job. While Hero has put forth their best scooter in the market, it is time that they focus on aspects such as effective marketing and moreover, improved sales quality. Keeping the price competitive at close to Rs. 65,000/-, the Maestro Edge packs goodies way more than anyone else in the market does. It is definitely a product that is capable of taking the desi manufacturer to new heights. Hero MotoCorp just raised the bar and the question is, who else is willing to take it any higher? 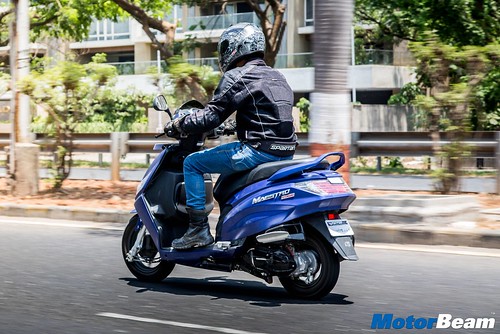 The styling really stands out from the rest of its competitors 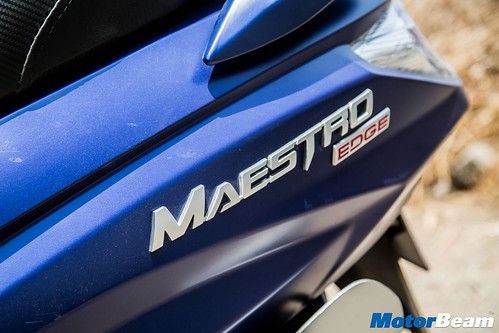 It’s just the Maestro with an Edge! 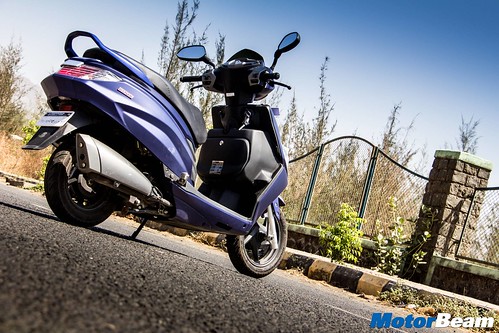 The styling feels a little bit overly done but is appealing

“The Maestro Edge is a great attempt by Hero in taking away market share from its erstwhile partner. The scooter does feel better than the Activa in most ways and is loaded with a ton of features which does make it a very practical option in the segment. A bit more refinement from the engine is something that should have been there while a different design language would surely make a difference among the seat of scooters in the 110cc segment.” – Faisal Khan, Editor, MotorBeam.
“Hero has finally got their canvas clean and after this new engine on the Maestro Edge, which is built ground-up definitely shows Hero MotoCorp is back in the game. The engine happens to be a noisy one while having all of its fun in the higher-end and hence it feels a bit slow till the 60 km/hr mark post which it shoots out all the power. The design is very much edgy and it sure does come with lots of features. The Edge update on the Hero Maestro has made it an appealing scooter especially with the matte colour options.” – Dhanil Vira, Road Tester, MotorBeam.
“The Maestro Edge is an impressive scooter by current standards. Although it lacks the refinement of its Japanese counterpart, I think Hero has done a fantastic job with it. The feature list is long and adds a nice touch to the scooter. The riding dynamics are pretty solid while the looks aren’t really that great. There is nothing more needed to be asked from this scooter other than a little quality and engine refinement. But other than that, full marks to Hero for the level of innovation.” – Adwait Babras, Road Tester, MotorBeam.