Scooters in India have a major holding of the 2-wheeler market, majorly dominated by Honda while competitors have a better reach in particular sections of India. Honda is actually the market leader but nowadays people are looking into having something different in their vehicles. More features, better hardware and comparatively cheaper cost makes way for intense competition. The TVS Jupiter and Hero Maestro Edge are two scooters we’ve found to be gaining up on attention and threatening the market leader too. Both these scooters are here for a head-to-head shootout.

Motor Quest: The TVS Jupiter was launched in 2013 and it has been through very few cosmetic changes and numerous colour updates over the years. The Hero Maestro Edge is however a Hero Maestro with a complete makeover, launched in 2015. Both the scooters have something in common – their approach towards the male segment of the respective companies. 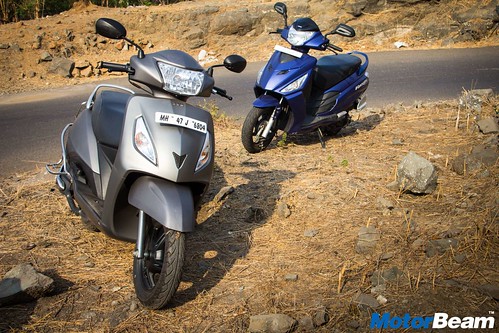 Both scooters have a unique design that looks good

Styling – Both scooters have completely different design concepts, the Hero Maestro Edge, as the name suggests, has a very edgy design while the TVS Jupiter stays subtle and smooth comparatively. For instance, the front headlamp of the Jupiter is curvy at the edge and has a normal rectangular shape while the headlamp of the Maestro Edge has a pointy edge and also gets a tiny visor above it. The 10-spoke, 12-inch alloy wheels do the job on the Jupiter while the Maestro Edge has an asymmetric option of a 12-inch alloy at the front and a 10-inch alloy at the rear. 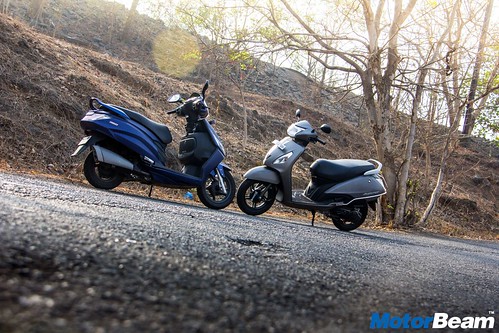 The pictures say it all – sharpness vs smoothness

The Hero Maestro Edge looks much fresher than the TVS Jupiter

All body panels, from the front mudguard to the tail-lamp have an edgy triangular concept on the Hero Maestro Edge while on the TVS Jupiter, the body panels are very simple and smooth. This stands true even in case of the rear grab-rail. The exhaust on the Maestro is a protruding unit with a designed cover on it while the same on the Jupiter goes within the body with a small chrome plate on it. 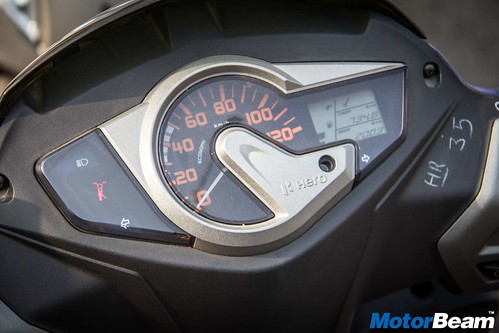 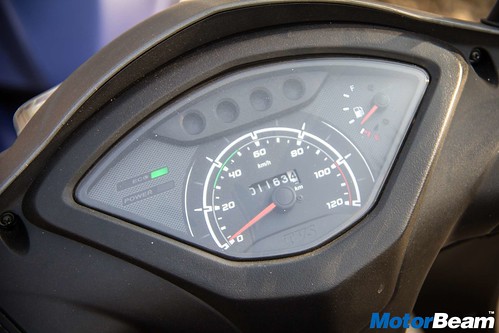 The instrument console is rather simple and clean on the Jupiter 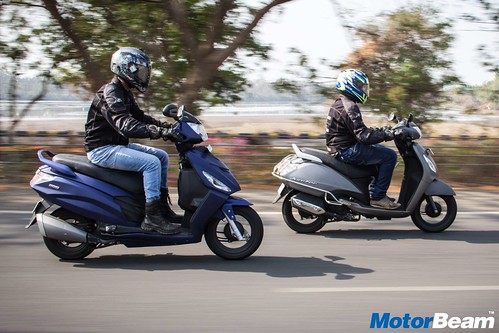 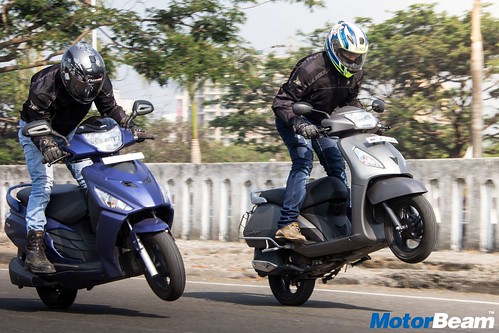 Performance – Both the scooters are very similar in performance too as both of them feature a 110cc CVT engine. The power and torque figures are almost the same. The Maestro churns out a bit more of both at a slightly higher RPM. Even though both the engines are similar, the power delivery and response is completely different. The Jupiter has an amazing initial performance while the Maestro is more lively in the higher-end. The Jupiter is quicker as it gains speed very quickly right from 15 km/hr, however the Maestro becomes more responsive post 50 km/hr. The Maestro even has the better top speed. 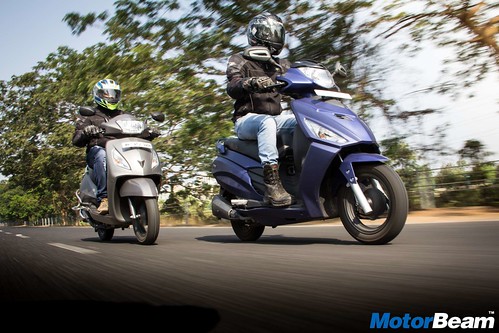 The Hero Maestro Edge has a better top speed

Both the engines are different in nature and the NVH levels also differ a lot. The Jupiter is smooth with its initials and builds up some vibrations in the top-end. While the Maestro is completely opposite, the engine feeds significant amount of vibrations at the beginning and smoothes as we gain speed. The so called rev-range for the Jupiter is from 20 km/hr to 65 km/hr while the same for the Maestro Edge is 40 km/hr to 80 km/hr. 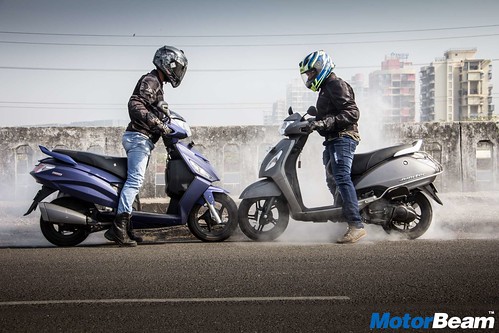 Head-to-head and they are capable of burning rubber 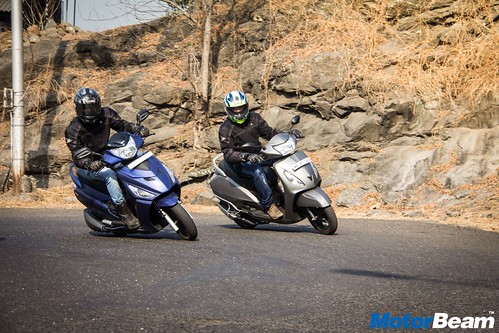 The Hero Maestro Edge has a better stability advantage

Riding Dynamics – Not much can be said about the riding dynamics as a scooter will always ride like a scooter, but there are some things in which both the Jupiter and the Maestro perform differently. The lighter weight and peppy response makes the Jupiter flick very quickly. It is a complete fun to ride scooter in traffic as it just zips through traffic. The Maestro on the other hand stays very stable and has good straight line stability. The Maestro stays much more planted while cornering too. 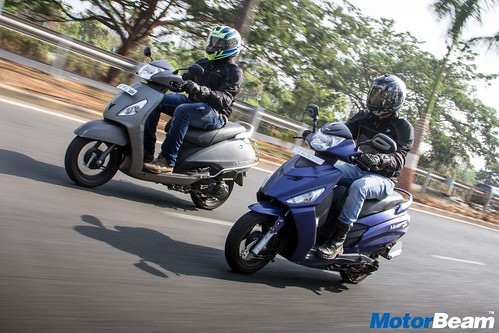 On clean tarmac, both the scooters feel like home with good grip on offer

The MRF tyres on the Hero Maestro Edge do a great job as they grip really well, the TVS Jupiter however has the set of TVS tyres which have decent grip but not as much as the MRFs do. Under hard braking, the TVS skids easily while the same with MRF on the Maestro has lesser skidding due to Hero’s Integrated Braking System (IBS). Both the scooters have a similar suspension setup – telescopic at the front and spring loaded suspension at the rear, which gives them a very pleasant ride quality. 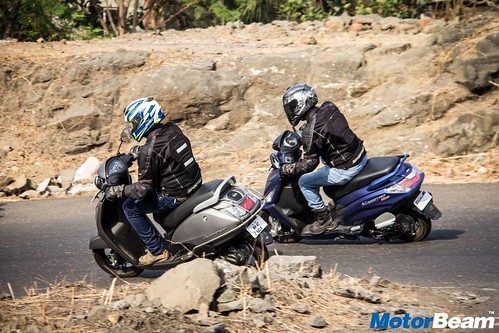 Verdict – The Hero Maestro Edge and TVS Jupiter are very strong competitors. Both have their own set of positives and negatives. While the Maestro is feature rich and has better looks, the Jupiter brings itself up with a bit more refined engine. Choosing one among these two is very difficult, but a winner by a margin is still a winner. Although the Maestro is newer here, the Jupiter’s smoother engine is the decision maker and makes it win. However if the subjective looks and features matter more, then the Hero Maestro surely has the Edge over the TVS Jupiter. 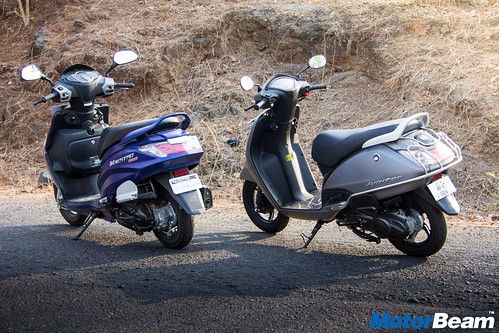 Both these scooters are worthy competitors from their respective manufacturers

“Although the verdict may sound a bit biased, I would personally pick the TVS Jupiter for its smoother engine and immediate performance. The Hero Maestro Edge is an appealing scooter and rides well too but feels sluggish at its initials and that’s what takes the mood off. It has got a better top speed but the Jupiter goes off the line early and that is what scooters are meant for.” – Dhanil Vira, Road Tester, MotorBeam.
“Both bikes do not have much differences except for a few key features. Personally, I would not choose any one over the other simply because both have different USPs which make the choice harder. Since I admire cruising performance, I would recommend the Hero Maestro Edge. When you think of it, the Maestro is incidentally feature loaded which is enough to sell itself.” – Adwait Babras, Road Tester, MotorBeam.