M is the most powerful letter in the world. I learnt and experienced that during a track drive in Chennai late last year. The thrill of pushing all the ///M cars on the track still gives me an adrenaline rush. However, what we are sampling today is a partial M. Now what does that mean? When a regular BMW saloon decides to jump into the clothes of its more powerful counterpart, the concoction is called an M-Sport car and that’s what we have here – the 2016 BMW 320d M-Sport.

MotorQuest: The BMW 3-Series has always been known as an engaging car to drive and it is a favourite amongst enthusiasts. The older BMWs offered a lot of unadulterated fun while the newer models are loaded with tons of technology and driver assistance features. 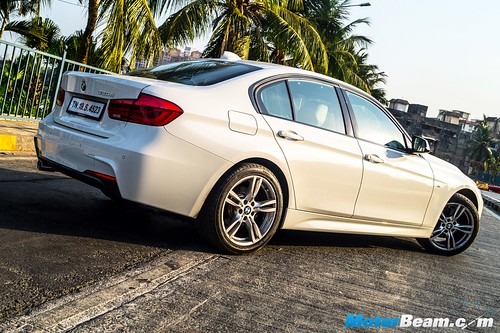 Exteriors – The BMW F30 3-Series recently received a minor facelift which is called Life Cycle Impulse (LCI) in BMW lingo. As a part of the facelift, the sedan now gets new LED headlamps and tail lights along with a revised front bumper and new alloys. However, the M-Sport variant that we have here comes with the M-Sport package on the outside that includes both the front and rear bumpers along with some subtle M badging. The car looks sexy as ever but it takes a sharp eye to tell the pre-LCI and LCI versions apart. The M-Sport kit ups the sporty appeal of the car and attracts that little bit more attention. 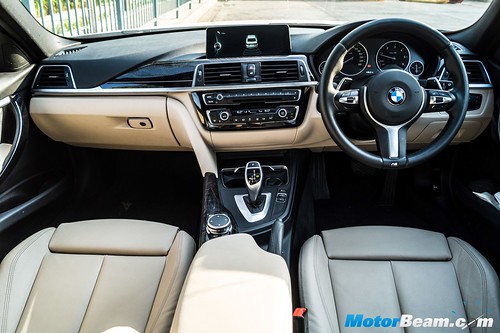 Interiors – The seats of the 3-Series are quite low slung so once you get a hang of the seating position, there’s a lot to appreciate inside the cabin. The insides haven’t changed much apart from some additions like an HUD display and M-Sport seats but all this is available only on the M-Sport variant and not the other trims. The HUD display works well and displays a lot of info like phone records, tracks, radio stations apart from the speed. The M-Sport seats offer terrific support and feel very comfortable too. There are no carbon fibre trims on this one but BMW does offer them as an option. The quality of the interiors also feels a tad bit better now. Another thing that catches your attention is the new M-Sport steering wheel but more on that later. You also get a sunroof and the usual iDrive infotainment system with an 8.7-inch screen. However, it’s a pity that the 320d misses out on a rearview camera and makes do with just parking sensors. 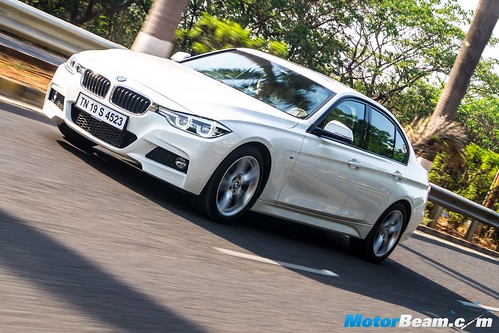 The upgraded B47 engine makes the 3 a hoot to drive

Performance – The 2016 BMW 3-Series comes with a 2.0-litre diesel engine and the oil-burner is the new B47 unit that also made its way to the X3 recently. It belts out 187 HP of power and 400 Nm of torque which is slightly more than the older unit’s output. The engine is an absolute blast to drive and it starts pulling with great urgency right from low RPMs. The mid-range feels very strong while the engine is a gem even at higher RPMs. Acceleration is just marginally quicker than the older unit and we clocked a 0-100 km/hr time of 7.55 seconds. 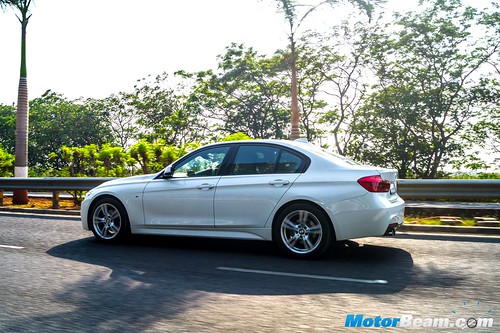 The power delivery feels very linear and due to this the engine feels very peppy. The 4-cylinder unit is fun right up to the redline of 4500 RPM for automatic and slightly more in manual mode. It also cruises happily at 100 km/hr in 8th gear at a touch below 1500 RPM. The engine is mated to the same 8-speed ZF gearbox but the ratios now seem to be better tuned than the pre-LCI model. The gear shifts are quick and the transmission is smart enough to understand the driver’s requirements. 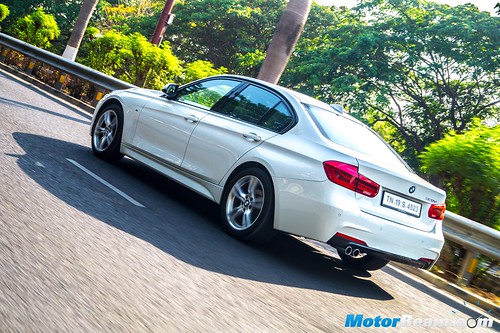 Apart from being fun to drive, the 320d is very efficient too

The new engine feels much more refined than the older model. It comes with an assortment of driving modes like Eco Pro, Comfort, Sport and Sport+. Comfort is best chosen when you plan to cruise while Eco Pro results in the car losing some of its steam for a marginally better fuel efficiency figure. The Sport mode makes sure the car stays right in the punchiest band of revs and it responds quickly to throttle dabs. In Sport+ mode, the car switches off the DTC so you better not try this mode on public roads. Talking about fuel efficiency, the 320d will keep your wallet happy with figures hovering around 12-13 km/l under normal driving conditions. 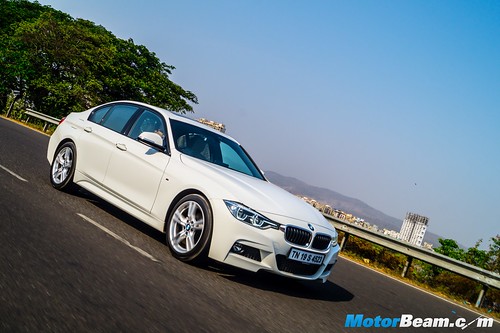 The 320d has agile dynamics but the steering lacks feedback

Driving Dynamics – BMW cars and driving dynamics always come on the same page. I adored the earlier 3 for the awesome steering feel but the new M-Sport wheel that comes on the 320d felt very light and lacking any sort of feedback. It feels good to hold and is well-weighted but the feel is just not the same as before. We might have to test another similarly specced car to confirm whether it was an issue with just our car or not. The sedan also loves wagging its tail out easily but the DTC does a good job of controlling all the drama. The ride quality is pretty sorted and the 3 feels comfortable over most surfaces. The M-Sport comes with bigger and low profile wheels though and hence the ride will be slightly better on the lower variants. 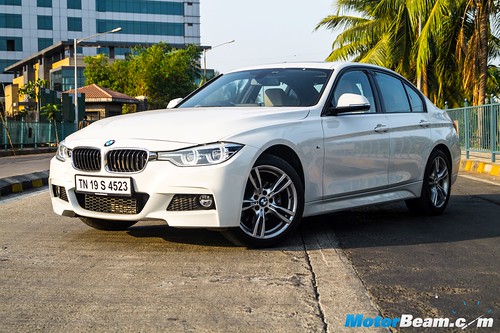 Long list of safety equipment; BMW has a well spread out network

Safety and After Sales Service – The 2016 BMW 320d is loaded with a ton of safety tech like six airbags, ABS, Dynamic Traction Control, Automatic Stability Control, Dynamic Brake Control, Cornering Brake Control and Park Distance Control. BMW has a pretty well spread out service network across the country and while service quality levels are fine, we still think Mercedes has the best service amongst luxury automakers. 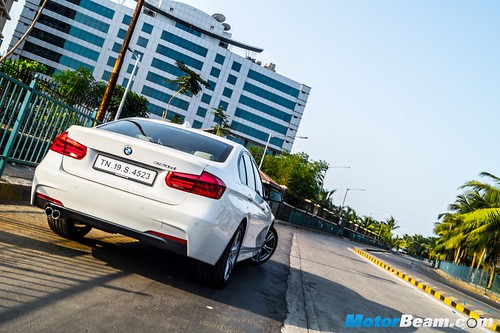 Verdict – The BMW 3-Series has improved and the oil-burner is a cracker of an engine. The M-Sport kit adds a lot of extra oomph to the car. However, the top variant is a pricey proposition. If you really want the M bits and pieces then the M-Sport variant is worth buying but do consider the fact that the lower trims will also offer the same levels of drivability and the fun factor will also remain unchanged. Our suggestion would be to pick up either of the LuxuryLine or the SportLine trims and save some hard-earned moolah. 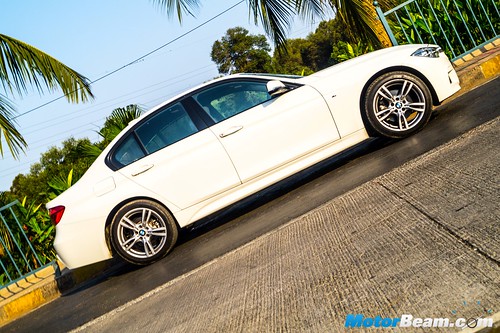 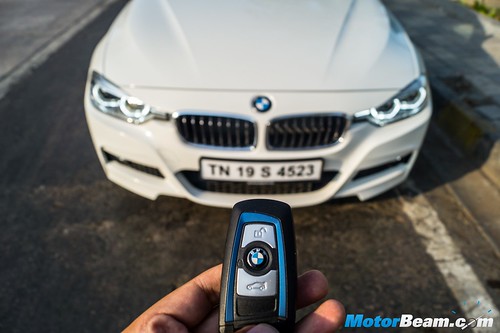 The 3-Series is a personal favourite, sliding its tail out was fun!

“The M Sport kit on the BMW 3-Series makes it look pure drool worthy and that steering feels so awesome to hold. But our test car’s steering did not feel like a BMW at all, there was the lack of feel and I do suspect the issue to be specific to the example we sampled. That said, the 3-Series is showing its age now and the next generation G20 version is highly awaited. The competition has grown strong and this Bavarian needs more than a LCI upgrade.” – Faisal Khan, Editor, MotorBeam.
“The 3-Series was one of my favourite cars since long but with the launch of the F30, BMW’s focus shifted towards comfort and it lost most of its involving to drive nature. The facelift does add some freshness to the package but the steering feel is strictly not the same what the machines from Bavaria are famed for, making it a deal breaker for me. Moreover, the competition has upgraded itself to the next generation making this look rather dated.” – Javeid Khan, Deputy Editor, MotorBeam.
“Being a BMW fanboy, the 3-Series is one of my favourite cars in this segment. The sedan is very engaging to drive and I adore the way it slides its tail out at every available opportunity. The updated engine is bonkers and while the handling is also good, I really wished the new wheel offered some more feel. Otherwise, the 320d makes for a good case for itself but the M-Sport variant is a wee bit pricier than the regular trims.” – Parth Gohil, Road Tester, MotorBeam.

BMW To Launch 330i In India