Yamaha has finally entered into the quarter-litre sportbike segment with the YZF-R25 and YZF-R3. While other Asian markets get the 250cc version, Yamaha Motor India fortunately offers us the bigger brother – the R3. The bike was long due from the Japanese manufacturer not just to India, but also the world ever since the birth of the Ninjas and the CBRs in the 250/300cc segment. And finally after years of speculation over the internet, the YZF-R3 is here, in flesh and not just an exhibition. Many would say it’s like a dream come true while others would silently let go of what they’d dream the bike could have been. Here’s our take on Yamaha’s latest 300cc offering.

Motor Quest: Yamaha first introduced the YZF-R15 back in 2008 and did not bring any of its elder siblings in the Indian as well as South-East Asian markets up until 2014. It finally unveiled a concept of the R25 at Tokyo Motor Show back in 2013 followed by the launch of the production ready models in the subsequent years. 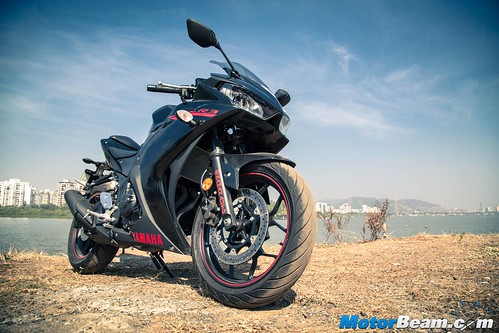 Bold and beautiful styling at the front

Styling – In 2015, Yamaha updated the YZF-R1, and ever since, it seems that it has brought about styling changes into the ‘YZF-R’ series. The R3 does carry some design cues from its bigger brothers and therefore still continues to carry the lineage. The most striking feature about the styling is the design of the headlamps that are ‘reverse-slant’ and are kind of tucked under the fairing rather than being conventionally placed. Such a design makes it a Moto GP bike lookalike. 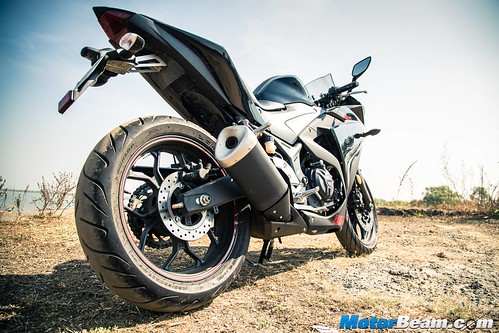 Chunky rear with sharp curves, the R3 has an appeal of its own

With the new styling and symbollic design cues borrowed from the R6,
the Yamaha R3 is definitely a looker

The blue with silver colour scheme of the R3 is well thought of and put together on to it with adequate amount of stickering not making it look very tacky (Yamaha knows 300cc is no toy!). The fuel tank is tall and well incorporated with the shape of the bike, although, we could live with a shorter one. The rear gets a tail lamp integrated with the tail of the bike while the rear fender sports the two standard 5W bulb clear lens turn indicators. Yet, all these features ensure the bike to resemble the ‘YZF-R’ family with their typical cuts and curves in the right places. 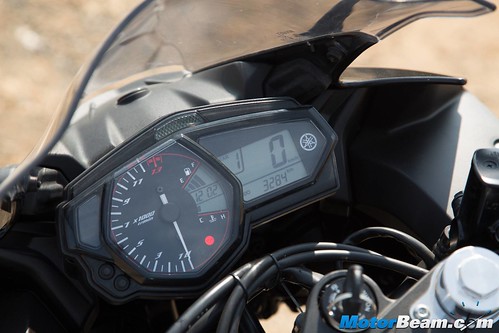 Instrument Cluster and Switchgear – The console features a large tachometer with a clock, fuel and temperature gauge incorporated into it. The fonts used give a sporty look without compromising legibility. On the right of the tachometer is the information display. The display is well designed as the information presented is neatly arranged and not too clustered. The information display includes a speedometer, gear position indicator, and the following information which could be toggled – an odometer, two trip meters, current run fuel consumption and lifetime average fuel consumption in L/100 km and an oil odometer. The oil odometer is an interesting feature that helps you keep track of the oil use in kms since the last oil change. The switchgear is the same as that on the R15 except that it does not provide a pilot and headlight switch due to full time running lights. The quality of the switchgear is very ordinary with a few minor glitches. 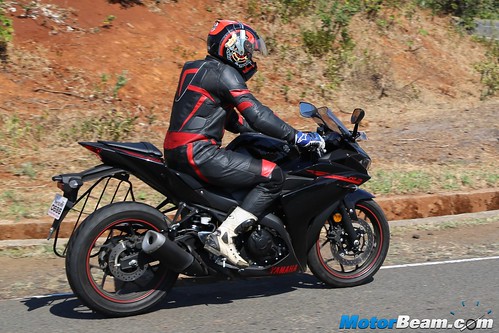 Ergonomics – The first thing that may come to the mind of anyone simply looking at the Yamaha R3 is that it is an easy-goer. Don’t let the clip-ons fool you into thinking that the bike is a ‘crouch-rocket’. Yes, you read that right; the riding position is pretty upright. That coupled along with not-so-rear set footpegs, the bike makes for a surprisingly comfortable cruiser. Sitting on the motorcycle, one could feel the position to be quite relaxed and the footpegs conveniently placed in the right position. The RVMs are effective and give a very good view without making the rider frequently turn his head to look into them. The fuel tank is neatly shaped to accommodate riders of all sizes unlike its little sibling. However, due to its bulgy design, it does get in the way of crouching completely. The rider and the pillion seats are sufficiently wide but lack necessary cushioning even when standing still. 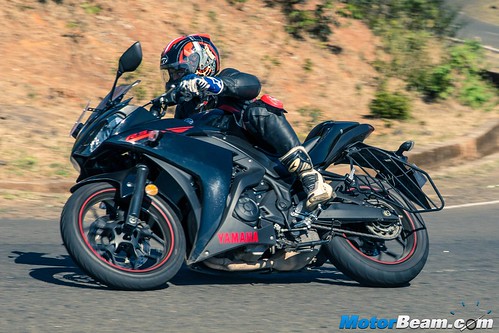 The R3 manages to live up to its reputation around corners

Performance – Coming to the most important aspect of the bike, the performance of the R3 isn’t anything short of the extraordinary. It does whatever expected from a typical quarter-litre class sportbike. To begin with, the grunt of the 29.6 Nm torque could be easily felt when the motorbike is let loose in first gear. After that, it’s pretty much linear up until a little north of the mid-range. And the best part; with the ingenious gearbox, the gear ratios are efficiently designed to best utilise this torque at any gear and any speed. Due to such a set-up the bike is not only extremely convenient to ride on the busy city streets but also makes for a decent performer on the tracks. With the torque distributed very well between mid-range and high-range, corner exits seem to be very quick. 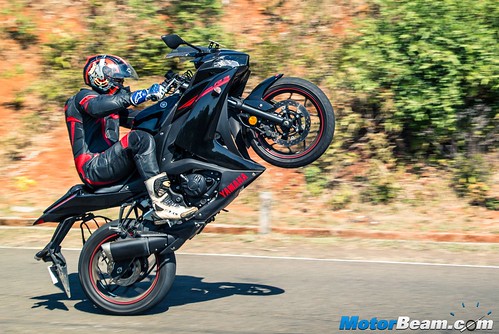 Immense surge of torque through the rear and voila, we’ve got a wheelie!

The YZF-R3 is powered by the 42 PS mill that peaks at 10,750 RPM and hits the ton within 5.8 secs. The bike in our tests topped out at just 175 km/hr (on the VBOX, 186 km/hr on the meter) which is slightly slower than the competition. The 4-valve DOHC engine makes sure it never runs out of breath and keeps pushing up to the redline. When the throttle is twisted off the start line, the front wheel barely manages to keep it down. Shift to second, you’d soon realise there is no traction control to tame the 42 horses. The terrifying yet the smooth power delivery by the engine make for ideal corner exits while the linear power delivery ensures getting to the next corner even quicker. 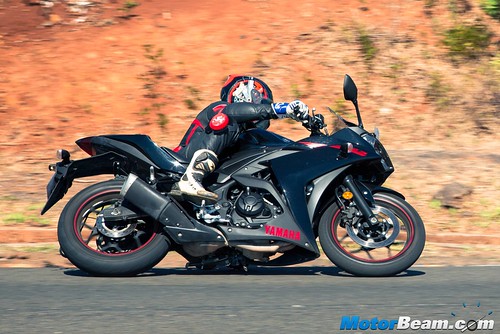 City commuting isn’t something that the Yamaha R3 is exactly designed for, although, it is surprisingly easy to ride it for a short spin downtown. The clutch is pretty light, which when coupled with the perfect gearing, makes the bike blissful for short commutes. However, the engine tends to get pretty thirsty and returns a meagre 20 km/l under city conditions. But, despite the stop and go nature of city traffic, the heat is excellently managed. One has to listen carefully to hear the coolant fan kicking in while the heat is efficiently dissipated without making the rider too conscious about it.

Highway rides are absolute fun on this Yamaha and this where the bike truly deserves to be ridden because this is where its performance is the most satisfying. With a smooth and a planted feel to it, the R3 cruises with no complaints whatsoever. In gear acceleration is commendable and overtakes are a piece of cake especially when the engine comes alive after 6000 RPM. The Yam cruises at 100 km/hr in top gear at just 5500 RPM with impressive containment of NVH levels. Expect anywhere between 23-26 km/l when sanely ridden under such conditions. 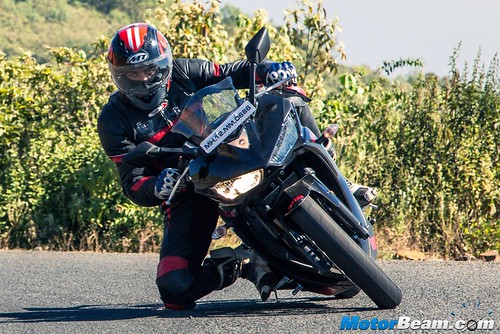 Through its aggressive looks, the R3 can scare its competition

Riding Dynamics – The Yamaha R3 feels planted no matter where it treads. A ride to the twisties in the canyons, short spins on the streets, this Yammie won’t let you down if you keep in mind how it is supposed to be ridden. Owing to its upright seating position, the bike feels maneuverable within city limits without stressing the shoulders too much. The suspension system works well with bumpy roads but the slightly harder seats negate the effect. The rider’s as well as the pillion’s seat is sufficiently wide but do not provide enough cushioning to complement with the touring capabilities of this highway rider. 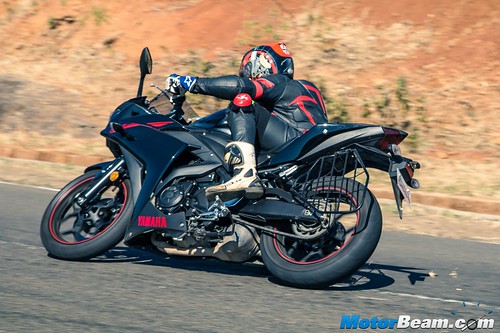 Despite the upright seating, the bike takes care of itself around twisties

With relaxed seating stance and a responsive engine, its no surprise that the YZF-R3 is a good all-rounder

The seating position is relaxed for both of them while the pillion may face slight difficulty to secure a grip owing to the slippery seat and the lack of something to hold on to except the rider. The MRF tyres provided on the R3 are not at all suitable considering the exorbitant torque the parallel-twin produces. Although mid-corner grip is fairly average, straight line traction makes the tyres barely qualify for track usage. The 130 mm travel of the front forks couple very well with the dual-pot front responsive brakes. Both the front and rear almost lack the initial bite while the stopping power gradually increases which is good considering the absence of ABS. 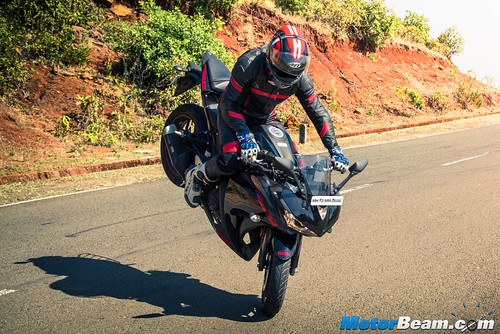 Verdict – The Yamaha YZF-R3 is no race machine. Although its other siblings do own the tracks, the heart of this bike truly belongs somewhere else. It is not exactly a motorcycle that would match with the likes of Valentino Rossi, but is still worthy of enticing loyal Yamaha fans. The Yamaha R3 marks no significant upgrade over its smaller sibling; the YZF-R15, as it misses out on essentials such as USD forks, Deltabox frame, petal discs, and a slipper clutch. To say the least, even ABS should have been provided as an option if not standard for the price it sells. For upwards of Rs 3.7 lakhs, the Yamaha R3 may force you to rethink your choices. It is something that has to be looked hard at to really appreciate it. However, all this is what makes it stand out not only from the YZF-R family but also the quarter-litre segment. Although it didn’t match the expectations of many, the R3 still finds its solace in loyal Yamaha fans.

The Yamaha R3 is not quite what the masses had been expecting since times immemorial. It does somewhat carry some genes from the YZF-R family but fails to impress the minds of hardcore racers. It seems that Yamaha has been focused on creating an all-rounder bike but slightly went off track by forgetting what the ‘R’ series stood for. 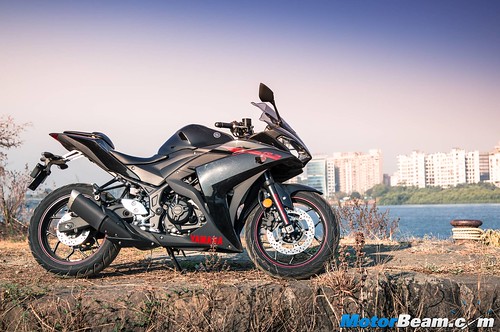 This Yamaha may not be a beast, but is definitely a beauty! 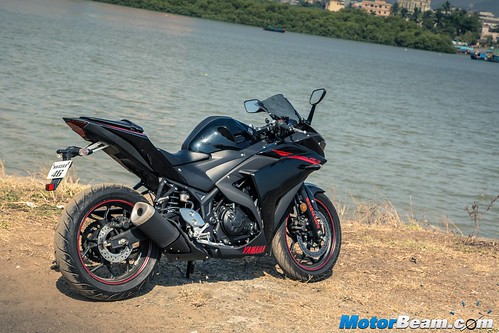 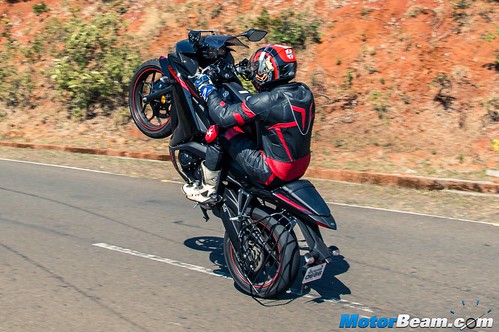 The R3 can be long gone in a blink of an eye off the start line!

“After the fantabulous R15, there were high hopes from the R3 and sadly Yamaha has disappointed. While it’s a good bike in many ways, cost cutting is quite evident in multiple areas and we don’t benefit from the same due to the CKD route. What the R3 should have been is the R15 with that fantastic 320cc heart but what the R3 has turned out to be is a 320cc Fazer, a bike for doing comfortable riding but not a corner craver. There is no R DNA in this bike.” – Faisal Khan, Editor, MotorBeam.
“The Yamaha YZF-R3 is much more like a powerful tourer rather than a committed track machine. Though its younger sibling is much more hardware rich, but for the price the R3 is offered, it isn’t much appealing. With one of the smoothest engines and the comfortable riding dynamics, the Yamaha YZF-R3 can be a pick for a few. Keeping the competition in mind, it does tick a few boxes yet misses out on a lot which it should have offered.” – Dhanil Vira, Road Tester, MotorBeam.
“I had been waiting for Yamaha’s reply to the Kawasaki Ninja 300 ever since it was launched. The YZF-R3 didn’t fail to impress me as it has qualities that make it stand out. Its powerful engine, its versatility, and the top notch quality is all that I look for in a bike. Although it misses out on valuable hardware, the bike yet feels complete. This effort by Yamaha cannot go unappreciated, but there are still many things to improve, and with the right additions, the R3 has the potential to be crowned as the king of its segment.” – Adwait Babras, Road Tester, MotorBeam.