The Activa 4G is all about convenience & practicality, something which it excels at

As we all know for 2017, the BS-IV norms have given a lot of automakers a chance to redo their engines and vehicles. Honda being no different is here with the fourth generation Activa. On paper and in person it looks more like a minor facelift and out on the road too, nothing much has changed. So what is the fuss all about that the Activa manages to sell more than 2 lakh units every month?

Motor Quest: The Honda Activa is one of the oldest automatic scooters and has been in the Indian market for 16 years now since it was first introduced back in 2001. 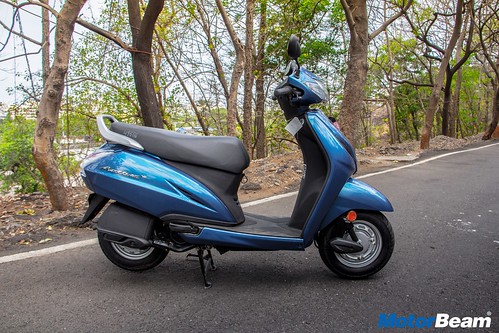 Styling – The new styling cues are very subtle and something only an Activa owner might notice. The front facia has now been updated with bigger vents and sharper lines, it also comes with reflectors on both sides of the front fender. Sadly there are no changes to the headlamp or the turn indicators. The side panels have been slightly changed with a few sharp lines and it now wearing a 4G badge. You still don’t get alloy wheels and even the rear is the exact same as the previous model. However, there are two new matte metallic colours available in the shade of grey and silver which do add a little life to the overall bland design but apart from that, there are no other changes to the overall appearance of this scooter. 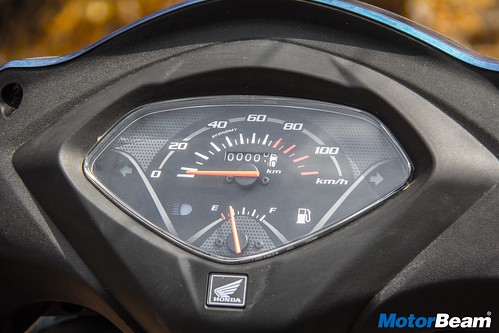 The instrument cluster has a speedometer, odometer and a fuel gauge

Instrument Cluster and Switchgear – The instrument cluster has the same design as the 3G and you’ll notice there is still no indication for low fuel. The switches have been carried over from the previous Activa and this time you won’t get a headlamp switch since the only new addition is the AHO (Automatic Headlamp On) feature which basically means you can no longer turn off your headlamp while your engine is running. What I find really annoying is the parking brake lever which is difficult to use unlike the much older Activas. Honestly, we were expecting something new since this is the fourth gen Activa after all and the same design has been around for a while now as the competition has been moving forward. 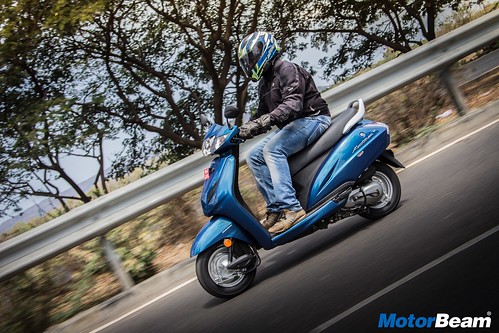 The seat is spacious and comfortable for both rider and pillion

Ergonomics – This scooter is exactly the same as the model it replaces in terms of ergonomics which is no bad thing. It’s comfortable with the same footpeg position and a spacious footboard that now comes with a hook which should help with carrying items or groceries. The seat for both rider and pillion is thick and supportive. The under-seat storage space is decent but not big enough to fit a full-size helmet. Honda has provided a hole under the seat where you can install a port for mobile charging. You still get the same size fuel tank of 5.3-litres which isn’t the biggest out there but what Honda could have done is change the position of the fuel flap since it’s more convenient compared to an under seat one. 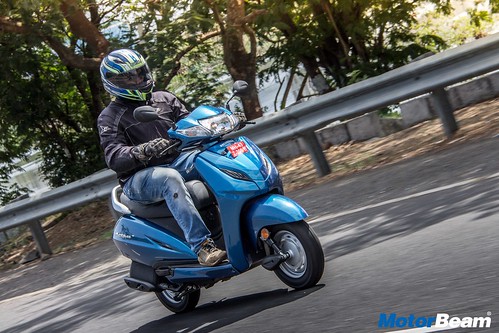 City performance is good and the Honda motor is very smooth

Performance – Unlike your network provider, here 4G doesn’t feel faster than the 3G. In fact, it feels a tad slower than its predecessor even though there is a slight increase in torque output. Refinement is comparatively better but it feels like it has lost that grunt past 40 km/hr which the previous generation Activa had but manages to start feeling a little lively again past 60 km/hr. Below 30 km/hr, the engine is very smooth and feels peppy so riding in stop-go traffic, is a breeze. 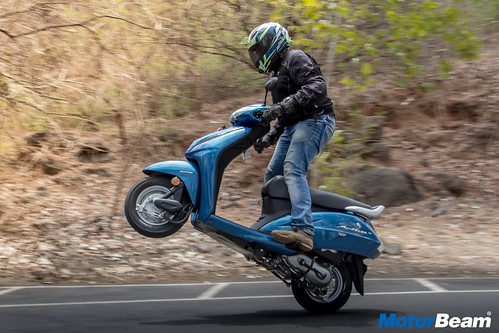 The Activa 4G being BS4 compliant, has lost some zing in its acceleration

The reduction in power is very minute and not really noticeable unless you aren’t someone who’s familiar with the Activa 3G. What they’ll also notice is that now the Activa does not reach the ton, the earlier model would just manage to do so on the speedometer. The CVT gearbox is smooth shifting and the HET powetrain isn’t very loud when you accelerate hard, the scooter feeling smooth to ride when you don’t open full throttle because when you ride aggressively, some vibes can be felt. The Activa 4G isn’t the most frugal scooter and returns under 45 km/l in city riding conditions.