For the country’s biker fraternity, the period between 2008 and 2012 was packed with a lot of excitement as several manufacturers went about testing the waters with promising products. KTM made a strong first impression with the Duke 200 at around the same time and grew from complete ambiguity to the leading position in the performance segment over the span of a decade. This year, the Austrian brand revamped its product portfolio where the Duke 200 continued without significant changes. Many believe that the baby Duke has lost its relevance with the arrival of the quarter-litre Katoom, or has it? A brief spin astride the 2017 Duke 200 was enough for us to provide a copper-bottomed verdict.

Motor Quest: Launched in January 2012, the KTM Duke 200 was the first product resulting from the Bajaj-KTM alliance. Based on user feedback, the Orange brand has been updating the Duke 200 time and again. But in a typical German fashion, the updates have been very minute save for the last one. Also the most affordable of the company’s five product lineup, the 2017 Duke 200 is sold through over 325 outlets spread across the country. 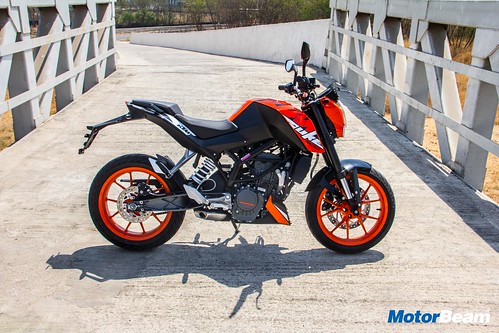 Styling – Enthusiasts were madly in love with KTM’s design philosophy when it was launched in 2012. Pop colours and a brazen-faced stance engulfed in a street fighter silhouette ensured that the Duke 200 stood out from the crowd. KTM rolled out the Duke 250 and 390 with a sharper design language which is an evolution of the original design. The Duke 200, however, continues to stick to the 5-year old form with the changes being limited to an updated paint scheme and flashy orange rims. Integrating seamlessly with the tail section is the 10.2-litre fuel tank which gives the baby Duke a mature attitude. Although there’s no hiding the age of this motorcycle, it still remains an eye-candy with terrific road presence. Fit & finish remains top-notch, as usual. 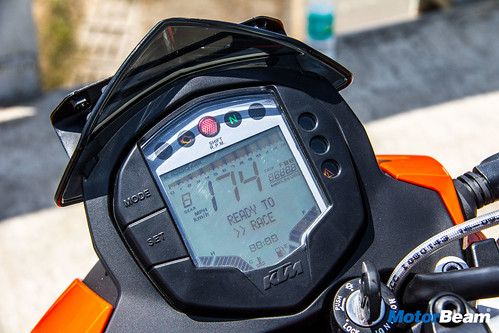 One can only imagine the bang this loaded console would have created 5 years back!

Instrument Cluster and Switchgear – Referred to as the ‘digital cockpit’ in KTM terminology, the 2017 Duke 200 is endowed with the same all-digital unit which was first seen in 2012. Also shared with the more-expensive Duke 250, this light-sensitive display throws out a multitude of information – including the speedometer, tachometer, odometer, two trip meters, distance to empty, distance to service, time, gear position indicator, average speed, engine temperature and average fuel consumption – which results in a cluttered layout that makes it difficult to grasp data in one go! 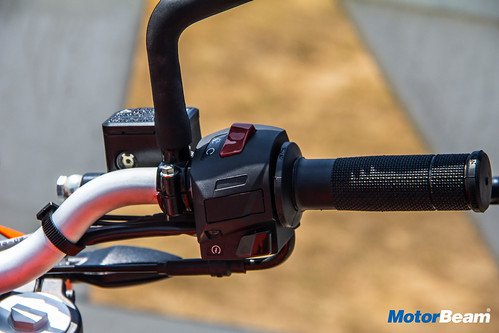 Placed around the orange-backlit display are various warning lights and icons including side stand warning, neutral indicator, high beam indicator and an immensely helpful shift light. Sizeable buttons to fiddle with the display are aptly positioned on the left. Carried over from the outgoing model, backlit switchgear feels premium and intuitive to use. There are no rough edges and all wires are neatly tucked. As part of the 2017 update, the Duke 200 gets rid of the headlamp switch and receives AHO (all-time headlamp ON) functionality.