The Mahindra KUV100 NXT is highly improved over the older version

It was in early 2016 when Mahindra introduced the KUV100 to all of us. The KUV100 stood out as a unique offering because of its quirky styling and the 6-seater configuration. However, the vehicle did have some flaws and that is why this version has been launched in less than 2 years of the car’s arrival in the market. The Mahindra KUV100 NXT is a mid-life update to the vehicle where a lot of issues have been ironed out and the package has been made a wee bit sweeter with some interesting additions.

Motor Quest: The Mahindra KUV100 is offered in 5-seater and 6-seater configurations and it is the only car in this segment to have such a feature. The styling of the car has also been a talking point with some people loving the design while some totally loathing it. 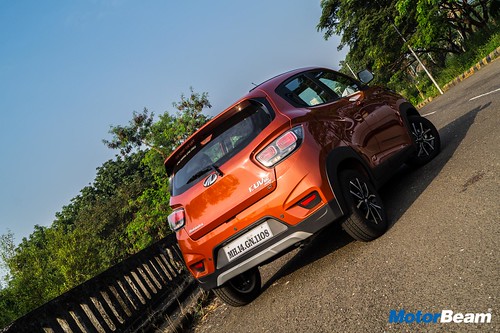 With the revised exteriors, the KUV100 NXT looks ‘marginally’ better

Exteriors – The Mahindra KUV100 NXT gets cosmetic tweaks including a new grille and a redesigned front bumper with faux skid plate. The sunglass-inspired headlamps with LED DRLs, the toothed grille and the chiseled bonnet make the KUV100 look unique. Get to the side and you’ll instantly notice the new machine-cut dual-tone 15-inch alloy wheels and of course the thickened black cladding. The door handles continue to be placed on the C-pillar. The ORVMs get integrated turn indicators and also get an auto-folding feature. The clear-lens LED tail-lights, roof-mounted spoiler and the bumper with the faux skid plate accentuate the rear profile of the car. While I cannot really say that the KUV100 NXT looks beautiful, it is easy to state that it does look a tad bit better than the previous version. 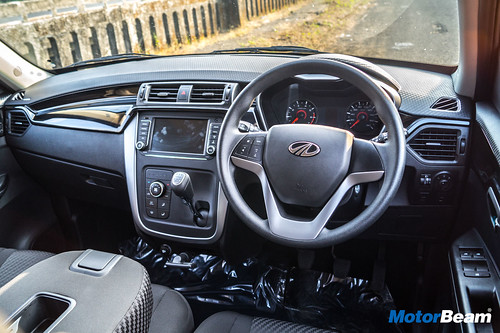 The K8 variant gets all-black interiors

Interiors – Mahindra offers the KUV100 NXT with two interior themes. The K2, K4 and K6 variants get a grey-themed interior while the top K8 trim gets an all-black interior. There are subtle tweaks to the cabin as well. There is a new 7.0-inch touchscreen infotainment system with navigation only while Apple CarPlay and Android Auto are still missed. The climate control buttons have been minimised from three to one. The top trim gets piano black and silver inserts in the cabin. The feature list is quite long too and you get steering-mounted audio controls, front and rear armrests with cupholders, cooled glove box, mood lighting, puddle lamps, height adjustable driver’s seat and driving modes. However, a rear camera is still missing. The touchscreen that you see here is borrowed from the TUV300 and is smooth to use but sound quality from the speakers is pretty average. 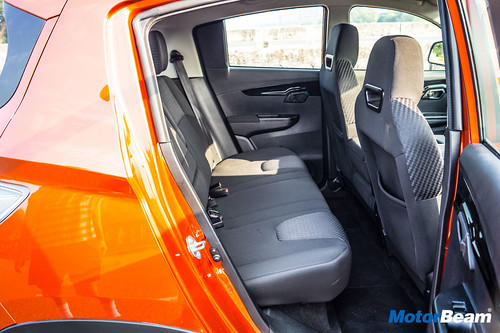 Space at the rear is average but shoulder space is tight

The climate control button needs effort to operate, while the pull-type handbrake lever is placed below the dashboard. Where the KUV100 really excels is practicality. There are more than enough cupholders and storage spaces inside the cabin and even the seats are fairly comfortable. If you’re really thinking of shoving in 6 people in the car then you might be in for an unpleasant surprise because there is barely any knee room or shoulder space at the front for the middle passenger and things get really uncomfortable. The backrest of the middle seat makes for a very large and comfy armrest though. The AC cools the cabin very quickly but is also a bit noisy. The vehicle gets a 243-litre boot (expandable up to 473-litres when the rear seats are folded) and can hardly fit in a weekend’s luggage of 2-3 people.