The luxury SUV market, not only in India but worldwide, is on an absolute roll with so many new models getting launched by various automakers. It seems that every automaker is trying to outdo their rivals by providing newer technology, better engines and a crammed equipment list. Audi is not one to be left behind. While they launched the all-new Q7 in 2015, the company has now brought in the second generation of the very popular Q5 and the SUV has made its India entry to compete in a segment where choices are now galore. Does the new Q5 really have the potential to carve a good enough market share for itself? Time to find out!

Motor Quest: The first generation Audi Q5 was launched in 2009 and it was an absolute hit. The car sold in extremely good numbers worldwide and in 2014 there was a point when every third quattro car sold by Audi was a Q5. The Q5 redefined its segment thanks to its comfort, space, strong engines and off-road ability. 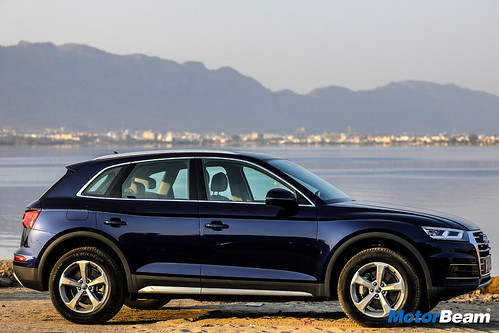 Audi has been giving a sharp design to its newer models

Exteriors – In terms of looks, the 2018 Audi Q5 does look like a mini Q7 from certain angles, for instance, the imposing front grille and the sculpted bonnet will remind you of the current Q7 than the older Q5 and this is where the similarities between the siblings end. The LED headlights with the LED DRLs are differently styled than the Q7 and so is the sportier-looking bumper. Changes to the side profile are in the form of the chrome window surrounds and new 18-inch five-spoke alloy wheels which we feel look a bit too ordinary. Though one can argue that the rear looks similar than the outgoing model, Audi has given a new LED pattern with dynamic turn indicators for the tail-lights and there is a small rear undertray with faux exhaust tips. Underpinning the MLB Evo platform that is shared with cars like the Bentley Bentayga, the SUV is lighter by 100 kgs than its predecessor. Overall, the car’s design isn’t revolutionary but is sharp and sophisticated. 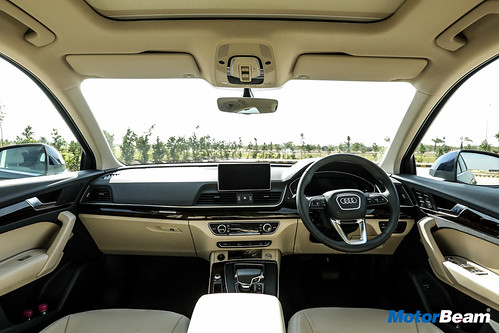 Surprisingly, Audi hasn’t incorporated the elongated AC vent design on the dashboard of the Q5

Interiors – The second generation Audi Q5 gets a modern and well laid-out cabin while reminding you of other Audis. There is a new 3-spoke steering wheel that is shared with the new A4 and Q7, Audi’s Virtual Cockpit, 3-zone climate control system and an 8.3-inch MMI infotainment screen. Speaking of which, the screen isn’t retractable and can neither be operated via touch. However, you do have a touchpad and rotary dial for the screen’s operation. Other features on offer are a huge panoramic sunroof, 360-degree surround camera, wireless phone charging, electrically adjustable front seats, memory function for the driver’s seat, hands-free parking, powered tail-gate and Apple CarPlay and Android Auto support for the MMI unit. It’s loaded, isn’t it? 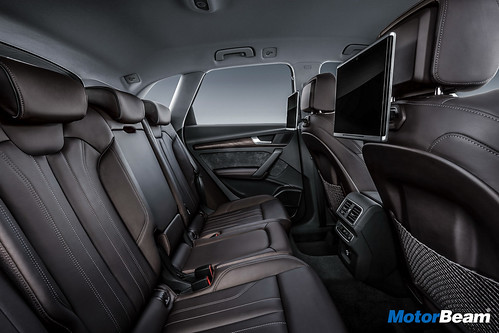 The cabin is well-appointed and quite practical

Audi’s virtual cockpit is the party-trick in the cabin of the new Q5, looks cool

The front seats offer good comfort and support and are fairly large in size but miss out on the ventilation function. Move to the rear seat and you’ll be surprised at the amount of space the new Q5 has to offer. While head room and shoulder space are good, knee room is pretty much satisfactory. Under-thigh support is decent too. That said, the car is better off being a 4-seater as the transmission tunnel hump and the rear aircon vents make it quite uncomfortable for the person sitting in the centre. The rear seats recline a tad bit for more leg space. You get a Bang & Olufsen 3D sound system that churns out good quality audio. There is a 550-litres boot for your regular warehouse duties. Also, the Ingolstadt-based automaker has, like always, used splendid quality materials in the cabin with very good finesse.

Audi To Assemble Q5 In India