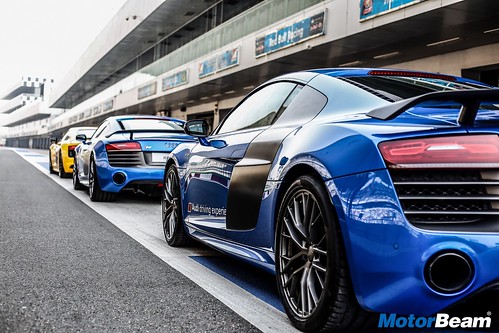 A dream sight for a petrolhead, LMX with the new R8

Now after driving these two cars having a generation gap, I finally got into the RS7. This one gave me the mixed feelings of the two, it is something in between that was born during the transition of Audi’s performance cars. Heck! Even the engine size (V8) is between the two after driving the V10 and V6. In short, the RS7 offers the practicality of the RS5 that can be driven on a daily basis but is a fantastic acceleration monster as well like the R8. Belting out 560 BHP of untamed power and 700 Nm of twisting force with a 4.0-litre bi-turbo V8. The way it delivers power is insane, 0-100 km/hr in 3.8 seconds and that too in a 5-seater 5-door car! 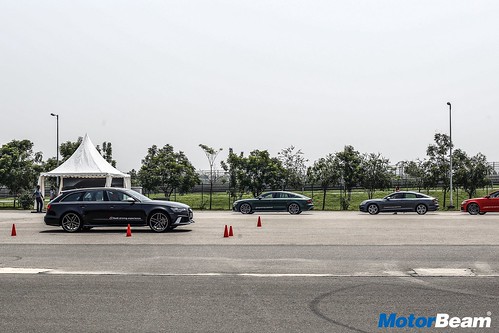 The Slalom course had these beauties lined up

After having some blissful laps around the track, it was time for the Slalom course. The Audi RS7, RS6 and S5 were lined up for this course and amongst these three, the S5 was the quickest since it’s the lightest car and has usable power for the tight course. The sprightly nature of the S5 makes it very nimble between the cones and provides optimum control over the wet section of bends on the Slalom track thanks to the lower weight. The RS7 and RS6 were fast but because of the bulk and sharp power delivery, they were struggling for traction while cornering hard. 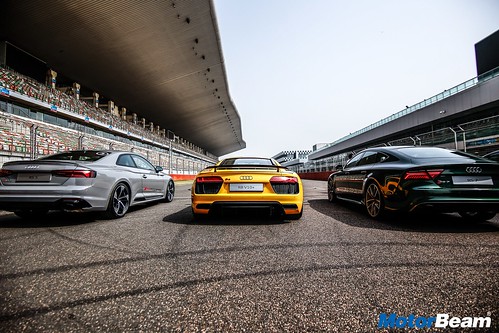 I had a ball of a time at the Audi Sportscar Experience driving a wide range of performance cars having distinct characteristics. The R8 LMX simply took the cake, it was the most engaging and fun car to drive at the BIC. Still can’t get over that angry V10 vocals and brutal acceleration, wow! And then there were the new gen beauties of Audi that made me experience their multifaceted nature on the track and off it. Really, automobile engineering over the time has got a huge leap forward with, of course, slight disadvantages like the lack of mechanical feel in cars but on the other side, many more magical advancements as well. 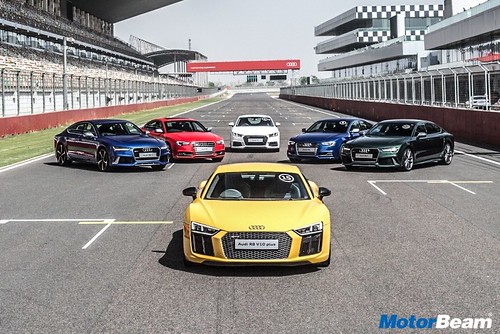 Got to test a range of Audi’s performance species