Performance – At the heart of the 2018 Ford EcoSport S is the 1.0-litre EcoBoost engine producing 125 PS of power and 170 Nm of torque and this time around, it comes with a new 6-speed manual gearbox. The EcoBoost engine is very refined with almost no vibrations but it tends to get noisy after the 3000 RPM mark. Some turbo lag is there upto 1600 RPM and there is a very healthy wave of power which propels the car all the way up to 6600 RPM. Power delivery is linear without any dead spots and overall the drivability is indeed very good. 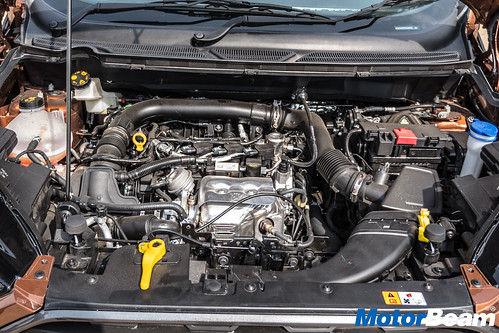 The 3-cylinder turbocharged EcoBoost engine is imported from Europe

The clutch isn’t exactly light while the new gearbox offers very smooth shifts. The claimed fuel efficiency for the EcoBoost engine is 18.1 km/l but in real life conditions we expect the figure to hover around 12-13 km/l. The EcoSport S also comes with the same 1.5-litre diesel engine that churns out 100 PS and 205 Nm and it is known to be a strong performer and is quite fuel efficient too with figures hanging around 16-18 km/l. 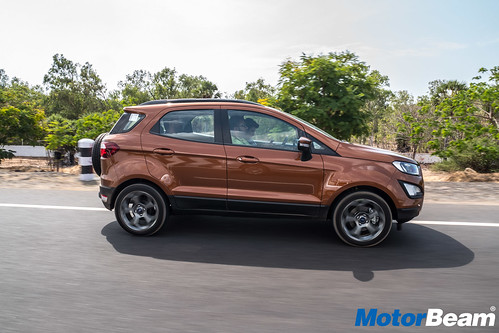 The EcoSport S really feels at home on the smooth tarmac

Driving Dynamics – The steering on the EcoSport S gives very good feedback and the car remains fairly composed on corners though there is some understeer if you push it too hard. The suspension is very stiff and because of this the ride feels super bumpy no matter what speed you’re driving at. The 17-inch wheels with low profile tyres may not offer the best comfort but they have amazing grip and even the braking performance is brilliant. 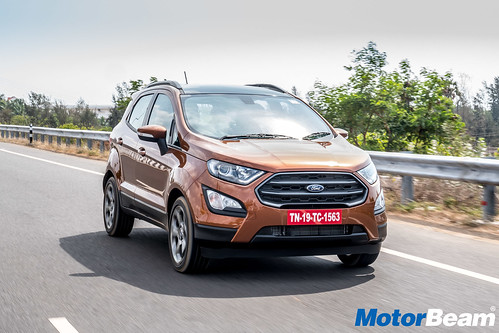 The EcoSport S is loaded with a ton of safety tech

Indian Made Ford EcoSport Recalled In Australia For Side Airbags