Two compact hatchbacks – one looks sporty while the other is practical

The all-new Maruti Swift was launched earlier this year and has already become the second best-selling car for the company. In its third-generation avatar, the hatchback packs in a lot and has got better in all aspects. The Swift’s primary rival is the Hyundai Grand i10 and we pit these two hatchbacks against each other to see who emerges on top this time.

Motor Quest: The last time we pit the Maruti Swift and the Hyundai Grand i10, it was the Hyundai that came on top. Two years later, in comes the new Swift and just going by the looks of it, seems the results are going to change. 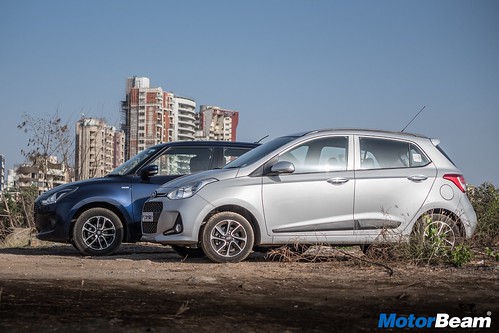 Of the two, the Swift is the attention-magnet

Styling – Hyundai’s cars are known to be the best-looking ones. See for instance, the Elite i20, Verna, Creta and the Elantra. All these cars are the most desirable ones in their segment, all credits to the company’s fluidic design language. But wait, what about the Grand i10? The hatchback too dons the fluidic design language and looks clean and good too but in comparison to the 2018 Maruti Swift, the Grand i10 does look like it lacks the oomph and the charisma. The Indo-Japanese company has definitely taken the game a notch higher, especially, with the new Swift’s styling. The car looks younger and gets all sorts of modern design elements like LED projector headlamps with LED DRLs, 15-inch diamond-cut alloy wheels and LED tail-lights. The Grand i10, however, misses out on LED projector headlights and LED tail-lights but gets LED DRLs and a size down diamond-cut alloys. 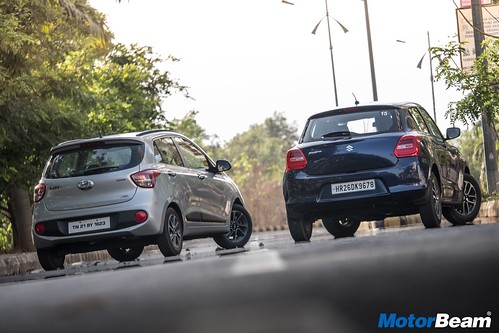 Hyundai Grand i10 has a better build quality among the two

In terms of dimensions, the Maruti Swift is slightly longer, wider and taller than the Grand i10. Wheelbase too is marginally higher in the Swift. The Japanese also gets better rubber when compared to the Korean. The former does duty with 185-section tyres while the latter does the job with 165-section rubber. Ground clearance on the Grand i10 (at 165 mm) is marginally higher than that of the Swift (at 163 mm). Overall, both the cars look good in their own ways. Having said that, if youthful and attention-magnet kind of looks are what you’re looking for, the Swift will appeal you but if you need a sedate and a no non-sense looking car, then the Grand i10 will come across as a more pleasing car. 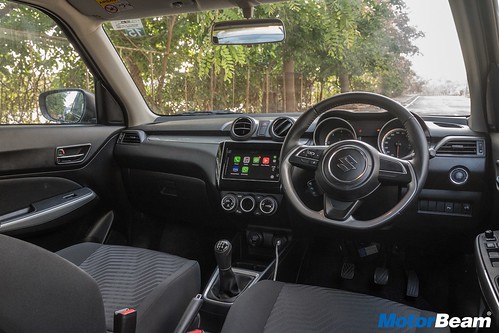 The Swift’s cabin is definitely the sportier one

Interiors – Step inside and both the cars have a very modern cabin. The Swift gets an all-black dashboard with silver accents while the Grand i10 gets a pleasing-looking dual-tone beige and black dashboard and this quite matches the exteriors well. However, the Swift’s cabin comes across as more sporty thanks to the driver-oriented design, flat-bottom steering wheel and the hooded instrument cluster with red dials. 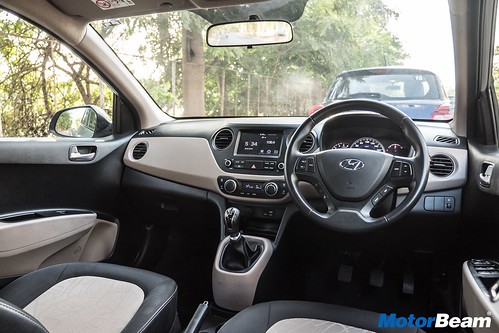 Fit and finish is better in the Grand i10

Meanwhile, the Grand i10’s interior looks premium and classy. Both the cars here get a touchscreen infotainment system with Apple CarPlay, Android Auto, USB, AUX and Bluetooth connectivity. However, in terms of the user interface, the Hyundai’s unit feels better as it doesn’t glare under direct sunlight (because of the matte finish) while the Swift’s unit is more intuitive. The quality of plastics used inside the cabin of the Grand i10 feels better than that in the Swift, the former gets a very basic and modest-looking instrument cluster as opposed to the sporty one in the latter. 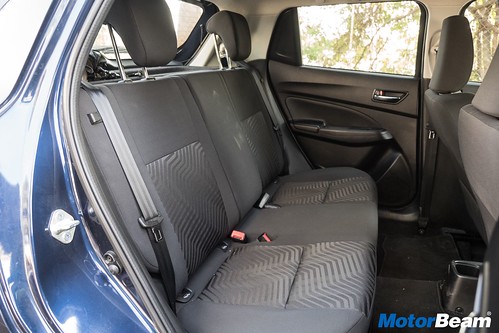 The Grand i10 looks a size smaller in front of the Swift but manages to offer more space inside the cabin!

In terms of features, both the hatchbacks get push-button start, automatic climate control, steering mounted audio controls, electrically adjustable and foldable ORVMs, leather-wrapped steering wheel and seat height adjustment for the driver. A unique feature in the Swift is the automatic headlights while the rear AC vent is unique to the Grand i10. 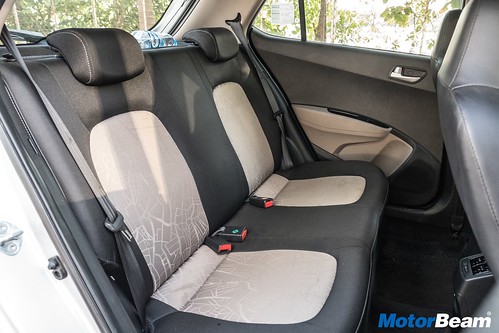 The Grand i10 has better leg room in the rear seat

Coming to the rear seat comfort, the Swift definitely has the widest cabin and also gets a wider rear seat but in spite of the car being dimensionally larger, it falls short of leg room in comparison to the Grand i10. Both the cars have the similar headroom but the Grand i10 gets more knee room and good under-thigh support while the Swift benefits from a larger shoulder room, which makes it a better 5-seater hatchback than the Grand i10.