The blacked out treatment on the headlamp, grille and the bumper give the EcoSport S’ front fascia a muscular look

The Ford EcoSport has always been a very strong contender in the compact SUV segment and to catch up with the competition, the automaker had launched the facelifted version of the car in late 2017. The 1.5-litre petrol engine was replaced by the 1.5-litre Dragon engine while the 1.0-litre EcoBoost was given a miss. Ford has reintroduced the EcoBoost engine with the EcoSport S which has now been launched in India as a sportier version of the regular EcoSport. 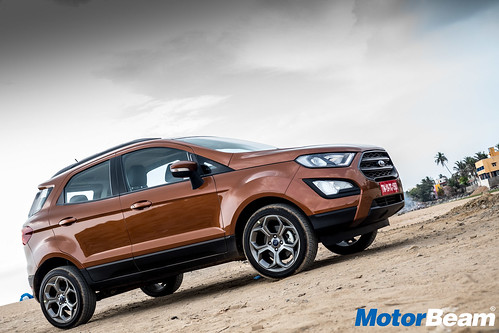 Exteriors – The 2018 Ford EcoSport S is based on the Titanium+ trim and takes all the features from the said variant. To do justice to the S moniker, the American carmaker has incorporated new design elements like a matte black grille, smoked HID projector headlamps and blackened fog lamp housing. Besides, there are new 17-inch 10-spoke smoked alloy wheels, black painted roof with an electric sunroof on offer. The rear profile is identical to the standard EcoSport save for the black spoiler. 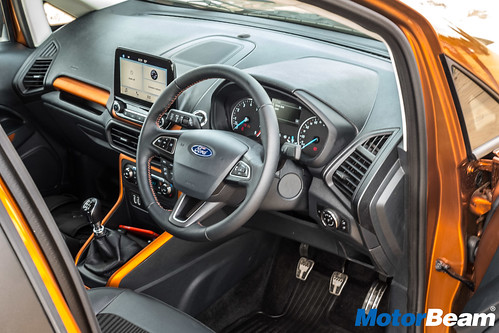 Interiors – While the dashboard layout remains the same as the regular EcoSport, the EcoSport S gets orange accents on the dashboard, centre console, door pads and even on the seats. The colour additions do make the cabin look more lively. The compact SUV gets a larger MID display and the instrument console also gets premium chrome rings. There is an 8-inch SYNC3 touchscreen infotainment system with Apple CarPlay and Android Auto. In terms of features, the EcoSport S, being the range-topping variant gets automatic climate control, premium leather seats with leather-wrapped steering wheel with contrast orange stitching, height adjustable driver’s seat, automatic headlights and wipers, cruise control, Ford MyKey and push-button start.

News highlights of the day include Triumph, Ola, Royal Enfield and Skoda. Triumph - The premium British bike maker is about to launch the Tiger   END_OF_DOCUMENT_TOKEN_TO_BE_REPLACED

Royal Enfield has developed new 350cc platform for future bikes. The coronavirus has let down the auto industry and the buyer sentiment.   END_OF_DOCUMENT_TOKEN_TO_BE_REPLACED

RE to bridge the gap between 350cc and 650cc motorcycles. Royal Enfield is the mid-size king in the domestic market. Their 350cc bikes are   END_OF_DOCUMENT_TOKEN_TO_BE_REPLACED