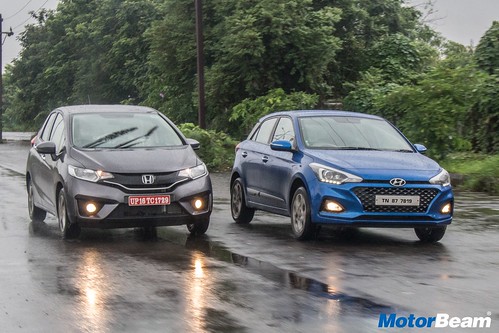 The i-DTEC has better drivability while the CRDI feels punchy

Performance – The Hyundai Elite i20 comes with a 1.4-litre, CRDI Diesel engine which puts out 89 HP and 220 Nm and this engine is known for its refined nature. I can easily say that refinement levels are best in class because the vibrations and clatter are so nicely controlled. In comparison, the 1.5-litre, i-DTEC mill on the Honda Jazz makes 99 BHP and 200 Nm and is also quite noisy and even with this updated version, it was hard to notice any improvement in NVH levels. The Jazz diesel offers very good drivability thanks to the limited turbo lag and linear power delivery thereafter while the i20 has relatively more turbo lag but the pull after the turbo starts spooling is also far more aggressive in the Hyundai, giving it that extra edge of excitement. Both these cars reach speeds above the ton fairly quickly. In terms of efficiency, it is Honda that has an upper hand with the Jazz delivering anywhere between 16-22 km/l while the Elite i20 is capable of giving out 14-18 km/l. 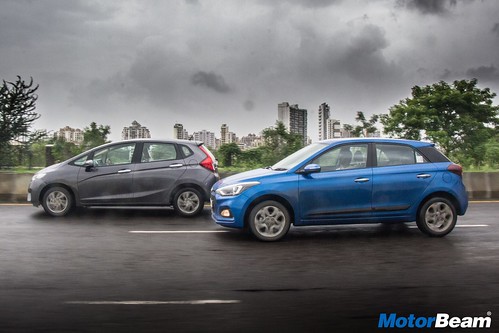 The i-VTEC feels dull in comparison to the Kappa VTVT

The petrol engines on both the cars are highly refined. The i20’s 1.2-litre Kappa VTVT unit produces 82 HP and 115 Nm while the 1.2 i-VTEC unit on the Jazz churns out 89 HP and 110 Nm. The petrol i20 feels more responsive than the Jazz and the engine also feels a bit more enthusiastic while the Jazz petrol has a laid-back nature with the engine feeling lazy at the lower RPM band while slowly gathering pace in the mid-range and the top-end having most of the grunt and thus it is the i20 here which is more drivable. Fuel efficiency is more or less similar on these cars, with the figure hovering between 9-12 km/l in the city and between 12-14 km/l on the highways. 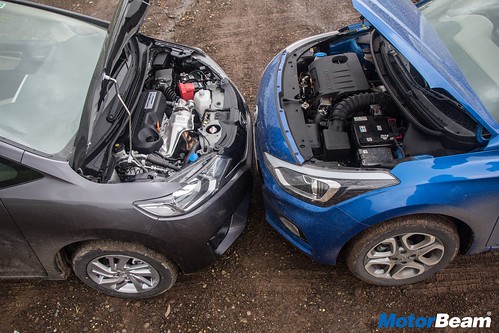 None of these cars get a diesel auto variant

One thing common between these premium hatchbacks is that they both come with a CVT gearbox with the petrol engine. The one on the Jazz is a 7-step unit while the i20 makes do with a 6-speed unit. Both of them come with an S mode but only the Jazz gets paddle-shifters. The i20 CVT is quicker off the line and is a smooth performer. The Jazz CVT performs similar, with smooth driveabilty but again as I mentioned earlier, it is the engine which feels lazy. If we talk about manual gearboxes, thankfully both the cars come with a light clutch. The Jazz has shorter throws than the i20 but the i20 too feels slick. 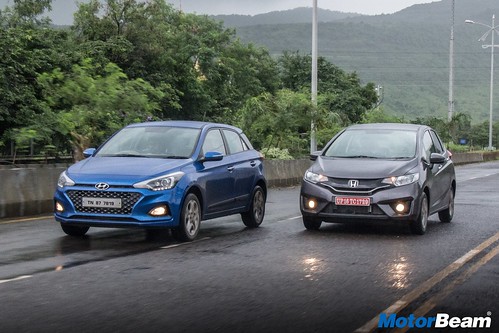 The i20 has a better ride than the Jazz

Driving Dynamics – The Hyundai Elite i20 has a softer suspension set up compared to the Honda Jazz and that translates into better ride quality for the Hyundai. The i20 is quite absorbent, not saying the Jazz has bad ride quality but it is just a bit stiffer and now as comfy as the i20 in the city. On the highways, the Jazz feels very stable but so is the i20 which holds on to the road nicely and doesn’t feel unsettled by any means. 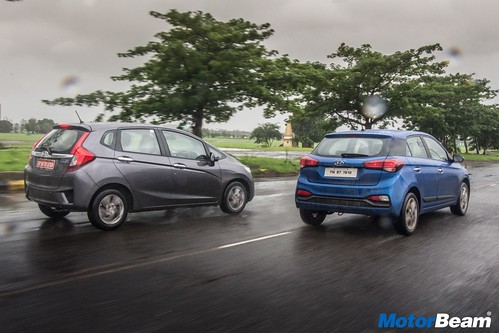 The Jazz is more engaging to drive than the i20

Talking about steering, the i20 has a lighter unit but even at high speeds it doesn’t weigh up enough to give an extra boost of confidence while the one on the Jazz feels much more well-weighted. In terms of steering feedback, it is the Jazz which is much ahead of the i20 and the former is also more fun to drive. Braking performance is better in the i20 since it has a sharp bite and stopping power is very good. Meanwhile, the Jazz has good stopping power but the bite isn’t as sharp as its rival and it happens quite gradually. However, the tyres on the Jazz have marginally lesser grip than the i20.

Honda Likely To Launch Jazz Twist Crossover In India In 2016

Honda Confirms SUV Based On Jazz