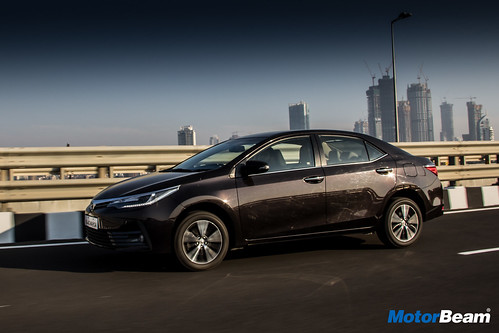 Performance – No changes have been made under the hood of the Toyota Corolla Altis. Our test car was the top-of-the-line VL trim which comes with the 1.8-litre, 4-cylinder, petrol engine mated to a 7-step Super CVT-i gearbox. The VVT-i engine is super refined and is very quiet at idle. Low-end punch is satisfactory for city driving but the motor really gets going from the mid-range right up to the 6400 RPM redline. The engine has a pretty good surge of power which keeps building up from 2500 RPM. The mill tends to get noisy at high RPMs though. The acceleration isn’t exactly mind-blowing or addictive as say on the Skoda Octavia 1.8 TSI but this motor is not really aimed at those who want the quickest acceleration times. Still, it doesn’t feel out of breath easily and driving the Corolla Altis is a breeze. 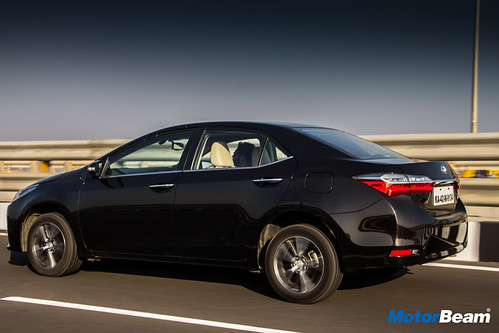 The engines offer satisfactory performance, but don’t expect much

It is the CVT gearbox that kind of bogs the engine down. The powerplant churns out 140 PS at 6400 RPM and 173 Nm at 4000 RPM but the rubber band effect from the transmission is very much present and it is a downer for sure. Due to that, the engine feels a little less punchier. The gearbox doesn’t get any Sport mode, but you get a Manual mode and also paddle-shifters. However, if you’re using the Manual mode, you’ll notice that you just cannot upshift until you cross 2500 RPM. A 1.8-litre petrol engine and a CVT gearbox don’t make a good combination when you talk about fuel efficiency. The Corolla churns out about 6.5-7 km/l in the city and approximately 9-9.5 km/l on the highways. 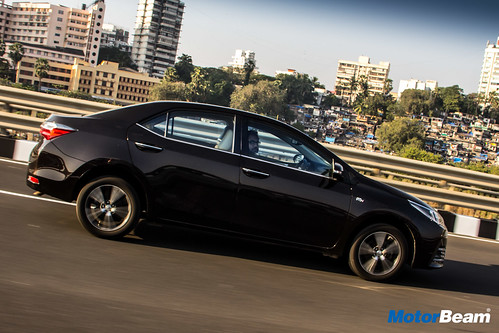 The Corolla Altis is one hell of a comfortable cruiser

Driving Dynamics – The ride on the Toyota Corolla is very comfortable and the suspension has been tuned nicely for our roads. At low speeds, the ride feels soft and plush and the sedan does a fair job of dealing with potholes. As speeds increase, the ride gets a bit firm and the car remains nicely composed. The steering is light at low speeds and offers satisfactory feedback. On the highways, I would have liked the steering to weigh up more because it still feels quite light. The Corolla Altis likes being driven sedately and if you tend to go corner carving every time, this one might disappoint. The brakes offer good stopping power but the pedal lacks feel & some initial bite and should’ve offered better confidence.