The D-segment in the Indian market has been getting redundant thanks to a lot of people moving towards SUVs. However, that hasn’t really stopped a lot of automakers from launching products in this segment. The Toyota Corolla has been a top-seller in this segment ever since it was launched in India, and despite exciting cars like the Skoda Octavia and Hyundai Elantra, the Japanese offering has been fetching class-leading sales. Toyota modernised the Corolla Altis few months back, and the sedan now gets some new technology and a bunch of enhancements to the exteriors and interiors, so let’s see what it is all about.

Motor Quest: While the Toyota Corolla Altis is positioned as a premium offering in the Indian market, it is probably the bread and butter car in global markets. The sedan is well-known for its no-fuss nature and unmatched reliability and this is one of the major reasons why it is a favourite of the masses. 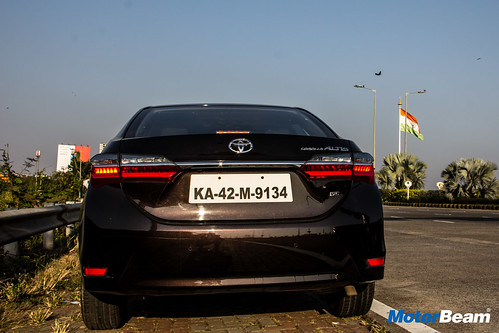 Changes are minor, only a keen eye will be able to spot

Exteriors – The Toyota Corolla Altis continues to retain its classy design. There is this Japanese feel to the styling, especially at the front end. The updated model here comes with revised front and rear bumpers, Bi-Beam LED headlamps with LED fog lamps, redesigned grille and new alloy wheels. The changes are very minor but they subtly enhance the sedan’s looks. The LED headlamps are powerful enough and offer a very good throw. The updated sedan gets a new Phantom Brown colour option along with the regular colours. Apart from that, not much is there to talk about the design of the Altis because the same styling is being followed since a few years now. 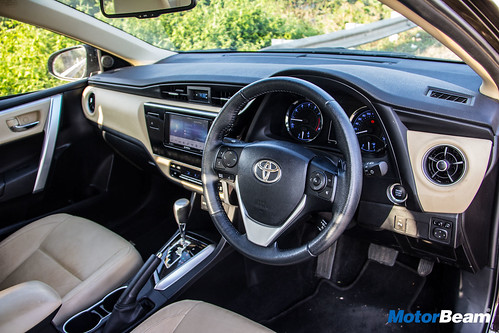 Interiors – The interior of the Toyota Corolla Altis feels airy and pleasant thanks to the large glass area. The layout is similar to the pre-facelift model but now you do get soft-touch materials on the dashboard along with a new colour scheme which is a combination of black and beige. The controls are well laid out and the buttons feel durable. Some of the features include 7 airbags, ABS, VSC, automatic climate control, auto-folding and reverse-linked mirrors, steering-mounted controls, cruise control, Hill Hold, electric adjustment for the driver’s seat and a rear armrest. Shockingly, the Corolla misses out on features like rear AC vents, sunroof and ventilated seats. The AC is a chiller though. 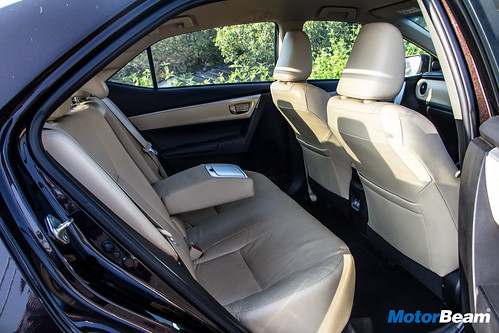 The touchscreen audio system sounds fairly decent, while the screen is responsive. However, viewing angles aren’t all that great and the display is hardly visible when you’re under direct sunlight. The rear view camera is also below average with poor resolution and it becomes almost useless in the dark. The Corolla Altis really shines on the practicality front though. The front seats are very nice when we talk about support and comfort and the large size of the seats is a boon. You also get a useful armrest at the front. All the doors have bottle holders along with other storage spaces and the number of cubby holes in the cabin is also very good. The rear seat is again large and comfortable and leg room and head space are more than enough. The boot is also nicely shaped and the large cargo area allows it to hold a lot of luggage.