The longest produced Mercedes car, the G-Wagen has become quite popular and has got a slew of updates since it first went on sale in 1979 but not much changed to the platform which had started to show its age since quite a long time. Enter the second generation G-Wagon, a car which stays true to its iconic design but is it enough to retain the charm of the original? Has Mercedes-Benz managed to keep the G-Wagen’s roots intact while making it thoroughly modern in every possible way? 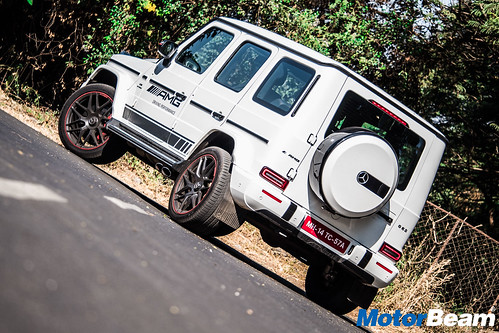 The 2019 G-Wagen retains the boxy design from its predecessor

Exteriors – The new Mercedes G-Wagen retains the boxy looks of its predecessor but gets rounded edges which really differentiates it from the old model. The rest remains more or less the same with round headlights (which get massive attention to detail along with 84 LEDs), a vertical grille (old one used a horizontal grille) and massive 22-inch wheels. Our test car being the Edition1 also gets red stripes on the alloy wheels as well as the gloss finish outside rearview mirrors. Mercedes has retained the front indicators on the hood which costs five times as much! The car has grown in every dimension and retains the tailgate-mounted spare wheel which carries a slightly smaller space saver tyre. 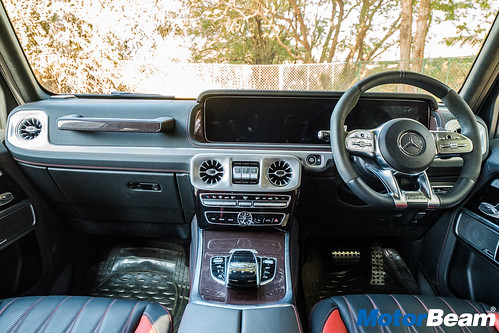 Interiors – The traditional charm is carried over to the interior as well because when you want to get inside, you have to use the key as there is no passive entry, the door handles are also traditional. The unlock and lock noise is like a machine gun firing and the doors feel heavy and the hinges are visible too. Below the driver’s seat, there is a fire extinguisher too but that’s where all old-school comes to an end and modern Mercedes luxury comes into play because the seats are extremely comfortable, bathed in Nappa leather with quilting on the door pads. The front seats get a multitude of adjustments along with heating, cooling as well as massage, meanwhile, the rear seats get a heating function. 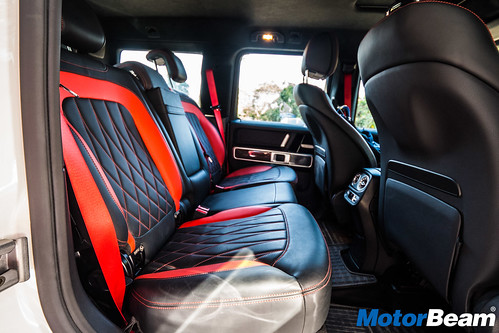 Mercedes has improved the interior space of the G-Wagen
considerably

Mercedes has retained some elements from the old G-Wagen

The dashboard is flat and there is a big grab rail on the co-passenger side, again, similar to the outgoing model. Meanwhile, there are twin 12.3-inch screens, similar to the S-Class which offer a multitude of information. The quality of the display is super crisp and there is a ton of information on offer, you can also see how much power, torque, and g-force is being witnessed in real time. The right side buttons on the steering wheel are for the instrument cluster (there are three display modes – Sport, Classic and Progressive) and the left side buttons are for the infotainment screen, one can also use the infotainment screen using the rotary dial as well as the touchpad, there is no touch-screen here. 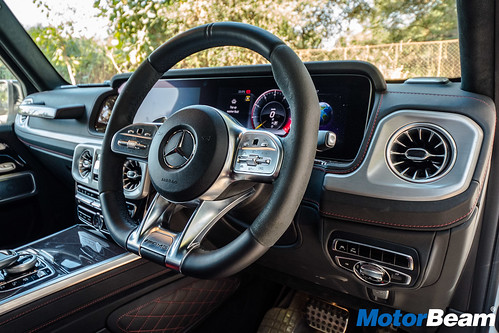 The cabin feels luxurious and premium

The Mercedes G-Wagen is loaded with a ton of features like Apple CarPlay, Android Auto, Burmester sound system (the tweeter’s design mimics that of the hood mounted indicators), reverse parking camera with adaptive guidelines and sensors, 360-degree camera, 64 colour ambient lighting, sunroof, radar-guided cruise control, blind spot warning on the outside rearview mirrors, lane keep assist, collision warning, brake assist, tyre pressure monitoring, Mercedes logo projection from the outside rearview mirrors and a lot more. Owing to the increase in wheelbase, there is a good amount of legroom and kneeroom in the second row and three people can sit comfortably due to the wide cabin. There is a good amount of under-thigh support too as the seat base is long, meanwhile, headroom is plenty too. 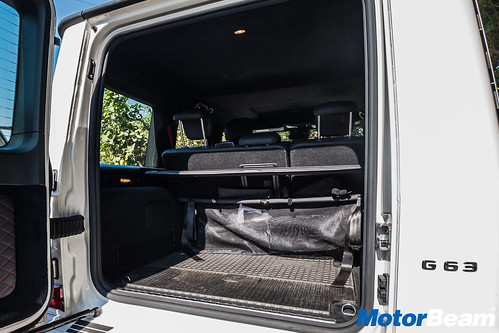 The boot is spacious but accessing it is difficult

The boot is decent sized but takes some effort to open as it has the heavy spare wheel on it and opens sideways. You can fold flat the second row of seats to liberate more room but that does take effort. However, all isn’t merry because certain things could have been better, for instance, dual exhausts continue to be placed right below the rear doors on either side and do heat up a lot when driving spiritedly, so people getting in and out of the rear seat have to be careful. There are some hard plastics which isn’t welcome in a car that costs this much and the power window controls on the driver side feel too plasticky, Mercedes should have used the metal ones from the cheaper S-Class. Also, a large panoramic roof would be a nice addition to bring in more airiness in the all-black cabin. That said, the new G-Wagen is a big step up in terms of space, luxury, quality, and equipment over its predecessor.