Motor Quest: The first Continental GT was a 250cc twin-cylinder two-stroke motorcycle producing around 21 BHP. Launched in 1965, it came with a 5-speed gearbox, clip-on handlebars, rear-set footpegs and a swept exhaust. In November 2013, we saw the same design language with the Continental GT 535. This time, Royal Enfield has gone ahead with a similar design language for the GT 650 as well. 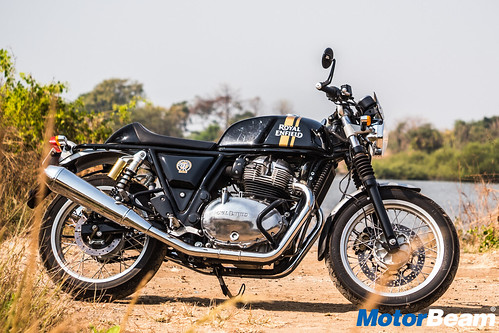 The Continental GT 650 has an iconic cafe racer design

Styling – The Continental incorporates the classic retro cafe racer design which looks very pleasing yet subtle. From the front to the rear, there is a minimal amount of bodywork. Spoke wheels, metal tank, telescopic suspension with gators, round headlight with a small visor and simple halogen tail-light and indicators give it a complete retro feel. The test bike here was equipped with a touring accessory seat which added more to the classic Continental look. Fully exposed engine with an oil-sump cover just as big as the fuel tank and twin up-swept exhaust pipes finished in chrome. This Continental GT had a great balance of chrome and black, which really grabbed a lot of attention. 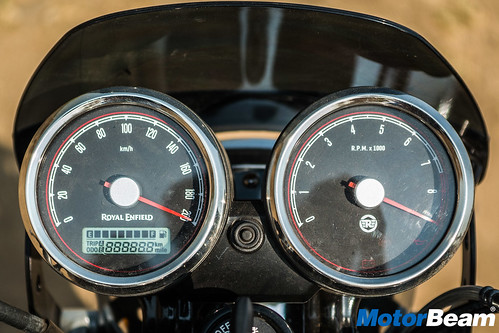 Dual pod analogue cluster which is shared between the 650 Twins

Instrument Cluster and Switchgear – The Royal Enfield Continental GT 650 gets a twin-pod instrument cluster which we have seen in quite a few Royal Enfield bikes. But even after being the flagship model, the GT 650’s cluster isn’t loaded with a lot of information. Although it’s an analogue-digital unit, the analogue includes the speedometer and tachometer. While the digital unit has twin trip meters, odometer and fuel gauge. The necessary information is conveyed from this cluster but then the Thunderbird also gets a similar cluster and it provides even more information. The switchgear also has a piano finish which is also shared across a few Royal Enfield motorcycles.