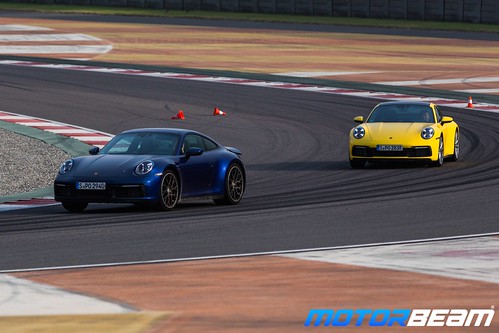 Despite the Boxter’s relatively modest performance figures, it was capable on the track

Back to the track, our next exercise was the most fun and the one I was looking for the most – the sports cars. We got to drive 5 cars, back to back, for a lap (not a complete lap but a lap none the less, minus the start-finish run). The first car I had a go in was the 718 Boxster GTS, powered by a 2.5-litre, 4-cylinder engine, belting out 365 HP, enough for a top speed of 290 km/hr. With a weight of just 1375 kgs, the Boxster felt light on its feet and changed directions with aplomb. 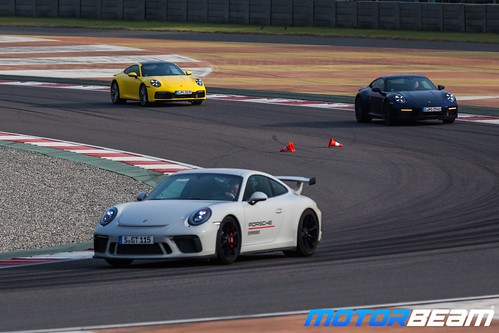 However, the Boxster was more of a warm-up, it was the first lap out and our instructor was taking it easy and naturally we too had to do the same since we weren’t allowed to overtake. All the cars I drove, they were in Sport+ with active exhausts turned on and PSM (traction control) active. Some of the cars, I did try manual mode but that felt pointless as the PDK gearbox is much faster in shifts than I could ever be. 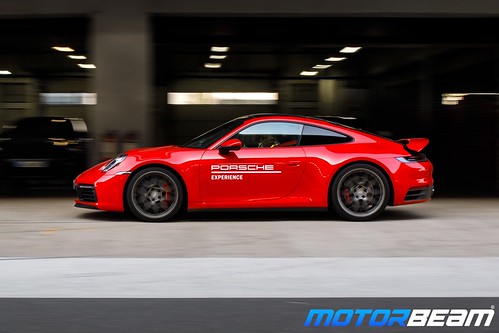 The design of the Porsche 911 is more evolution than revolution

So I jumped into the Porsche 911 Carrera S (the 992 which was launched just 2 hours back). While the exterior design is an evolution (like is always the case), the interior felt remarkably fresh. As I got out of the pit-lane, I buried my right foot, only to be pushed back into the comfortable and sporty seat, the thing just flew, taking just 3.7 seconds to do the ton (or 3.5 seconds with the Sports Chrono package). The heart of the new 911 is the 3.0-litre flat 6 motor which belts out 450 horses and 530 Nm of torque. 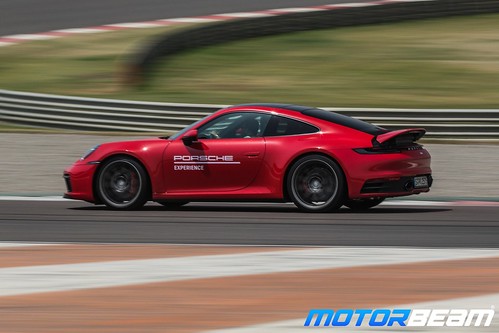 The new 911 is as stellar as ever on the track

Where the new 911 Carrera S really shines though is around the corners with terrific feel and feedback from both the steering as well as the chassis, it just dives into corners with a level of confidence and grip that would make you feel like an F1 driver. Could it get any better? The answer came in the form of the Carrera 4S and I was spellbound by the level of grip on offer. There was no roll, no pitching, none of that, just pure body control and laser-guided accuracy around the twisties. 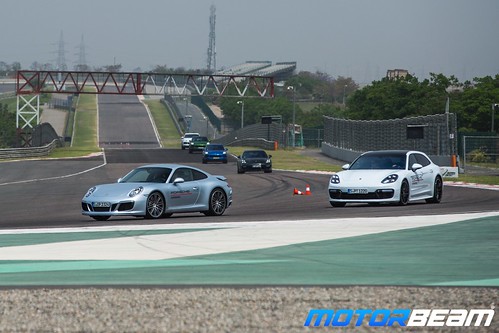 The 911’s weight balance is stellar, it just changes direction immediately and remains composed throughout. The optional carbon ceramic brakes are almost fade-free offering superb stopping power. The suspension did not feel overly stiff on the smooth race track but on the Indian roads, I suspect, the occupants may feel the jerk. Apart from the 911, I also drove the 718 Cayman and was in for a shock!