Mercedes has just facelifted its most popular luxury SUV, the GLC with some cosmetic changes and BS6 engines

It was in 2016 when Mercedes decided to launch the GLC in India, slotting it right between the entry-level GLA and the successful GLE. The luxury SUV segment was already very crowded at that time with enough products in the Rs. 50-70 lakh segment, but Mercedes made a smart move with the GLC. The GLC is bigger and more premium than the GLA but also more affordable than the large GLE. Competing against a variety of cars like the BMW X3, Volvo XC60, Land Rover Discovery Sport, etc., the GLC has had a decent enough run. But what we now have is the GLC facelift, with the SUV getting new clothes and a cleaner heart. 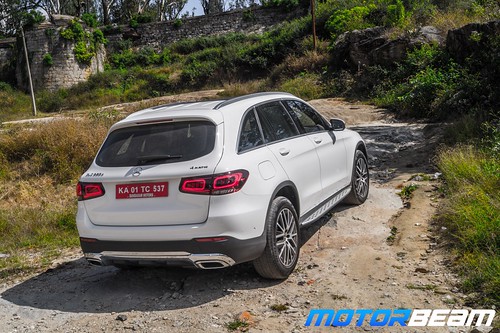 Exteriors – The overall body shape of the Mercedes GLC remains identical to the outgoing model. Though, a lot of things have been enhanced for better aesthetics and to make this SUV fit inline with Mercedes’ other newer cars. The headlamps get new inserts and the projectors have been replaced with LED beams. The headlamp unit also gets an LED DRL which covers almost the entire border of the unit, unlike the C-Class facelift which gets a single LED DRL strip at the top. The taillights have gotten a similar treatment, with new detailing similar to the bigger GLS. The bumpers of the GLC now come with faux diffusers and overall I think the car looks so much more polished now. The front looks handsome, the side screams luxury and the rear looks sporty alright. The new 19-inch wheels do their part in improving the looks of this SUV too.