Audi has launched a more powerful version of the A4 in India. The 2.0-litre TDI diesel engine has been given a bump in power and now produces 177 BHP of power at 4200 RPM and 380 Nm of torque between 1750-2500 RPM. The same engine was earlier producing 141 BHP and 320 Nm in the Audi A4. The car continues to use the same Multitronic transmission. The entry-level luxury sedan also gets Audi Drive Select as standard, which offers Comfort, Dynamic, Auto and Individual modes. The German automaker has priced the more powerful Audi A4 at Rs. 31.74 lakhs (ex-showroom, Mumbai).

The Audi A4 is the only car in its segment which uses a front-wheel drive layout (quattro variants are also available), whereas competitors like the BMW 3-Series and Mercedes C-Class are rear-wheel driven. The more powerful diesel Audi A4 takes 7.9 seconds to sprint from 0-100 km/hr against 9.1 seconds taken by its predecessor. The claimed mileage is 17.11 km/l, a 3% improvement over the engine it replaces. The Audi A4 has sold more than 10 million units since its launch in 1972, making it a very successful model for the Ingolstadt automaker.

Audi is also offering step up finance schemes on the A4 sedan. Under this loan plan, the customer pays an EMI of Rs. 29,000/- per month for the first two years, which increases to Rs. 49,000/- per month for the third and fourth year, peaking in at Rs. 59,000/- for the last year. The company has 27 dealerships in India which will be expanded to 35 outlets by the end of this year. Joe King has replaced Michael Perschke as the head of Audi India. The brand with the four rings has seen tremendous growth under the leadership of Perschke, who has now headed back to Audi Germany. 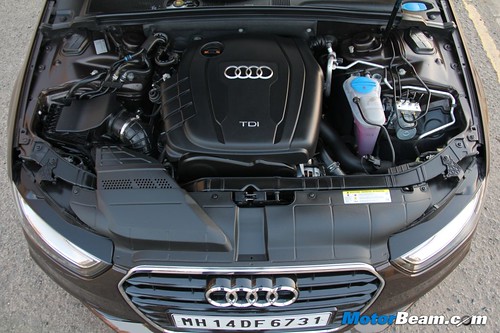