Thanks to the increase in both interest and demand of performance cars in India, the German trio have been treating us to go-fast machines of their mundane sedans every now and then. Audi has had quite the variety and there seems to be a performance model at almost every price point from the Ingolstadt brand. From the regular A badged sedans to the fire-breathing RS, it’s the S range which sits right in between. The Audi S4 is a car we all love for being practical yet having the punch to blow us on a daily basis while the S5 is similar in many ways but a whole lot more appealing.

Motor Quest: The Audi S5 is based on the A5 and is built solely in Germany. Starting life in 2007, the S5 got a facelift in 2013 (the pre-facelift model was offered with a V8 engine) and was launched in India last year, being brought down via the CBU route. 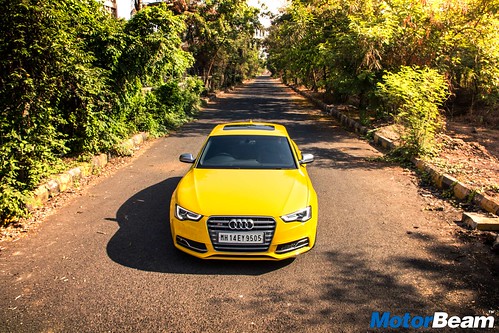 The Audi S5’s yellow colour makes it instantly stand out

Exteriors – The Audi S5 doesn’t look vastly different from the A4 but it’s this yellow colour which instantly stands out and makes people stare with admiration. As the A4 isn’t available in this paint shade, the S5 does come across as either a specially painted A4 or something different. The rearview mirrors are finished in silver and the right side mirror is too zoomed for easy rear visibility. For keen eyed viewers, recognising this as the S5 isn’t very difficult as compared to the A4, this model is naturally longer, wider and of course lower (much to our disappointment, more on that later). The difference over the A4 might not be striking but they are in line with the S4 with the changes to the bumpers and grille. 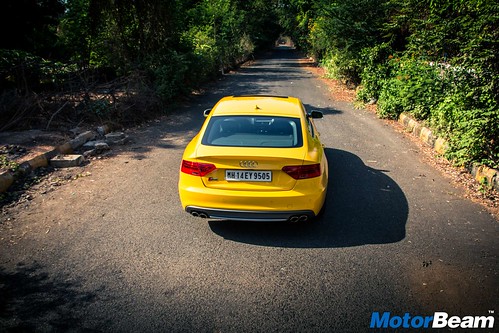 Where the Audi S5 is clearly visible as something different is the coupe design that’s evident at the rear. The roof flows all the way back till the boot as the tail gate is a one piece (both the boot and windshield open in one piece). This also results in the window line being lower and curvier, giving the S5 a striking visual identity. There is of course the S5 badging on the front grille and the boot while the V6T badge sits on the front fender. 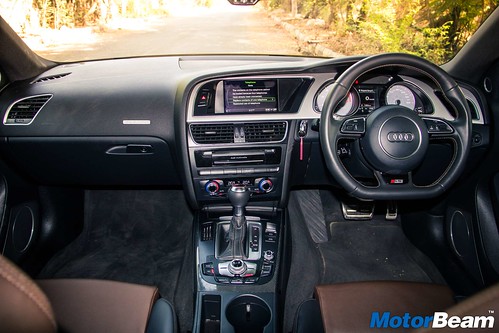 The cabin feels old now with the dashboard being dated

Interiors – The Audi S5 Sportback gets frameless doors which makes it unique to open and close the doors, specially with the windows down as it gives the feel of using a supercar. But once inside, you will be disappointed as the dashboard feels dated (it’s lifted from the A4 which has already got its next generation), this is after all a car which was developed way back in 2007 (with a facelift in 2012). The lack of freshness on the inside can also be attributed to the fact that Audi has taken its interiors a big leap up with the new TT and Q7. 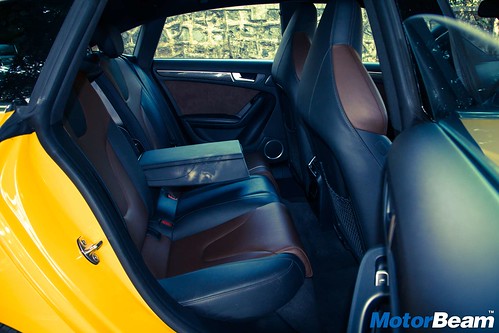 The dashboard is the biggest letdown of the Audi S5, it’s very dated now

The black dashboard has silver inserts and some sporty bits like the flat bottom steering wheel with S5 written on the third spoke and carbon fibre finish on the centre console. The single piece seat with integrated headrest at the front gets good side bolstering to ensure you stay planted through corners. The optional seats of course have S5 written on them and are finished in dual-tone brown and black. But space inside the cabin isn’t great as the sloping roof eats into the headroom. 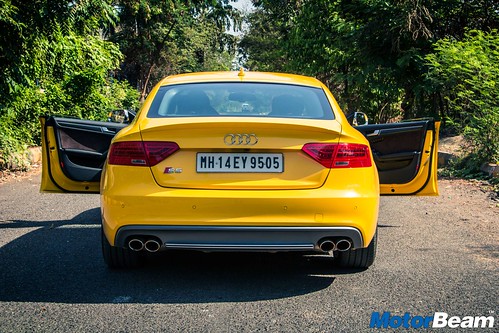 The frameless doors are the party piece of the Audi S5

The Audi S5 also lacks rear legroom, kneeroom and under-thigh support so this isn’t a car for rear seat occupants and then there is that huge transmission hump which means a third person at the rear is just not possible. Quality levels are good on this fully imported Audi while there are the usual features you get in a car of this price. Somethings could have been better like the interface of the MMI system which feels a tad bit slow now, compared to the new system in place on other Audis (the A4 is currently the oldest car in the four-ringed brand’s India lineup). The Bang & Olufsen audio system sounds nice but you rather hear those quad exhausts on full pelt. The boot is huge thanks to the one piece tailgate. 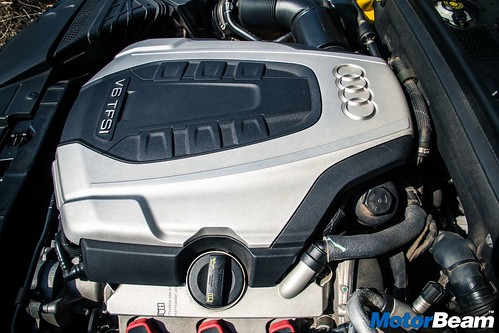 The V6 TFSI mill is a thunderous powertrain with excellent punch

Performance – Powering the Audi S5 is a 3.0-litre supercharged V6 motor that also does duty on the S4. This engine produces 333 BHP of power between 5500 to 6500 RPM and 440 Nm of torque between 2900 to 5300 RPM. The V6T, as it’s badged, is a cracker, it’s terrifically refined and there is just punch all throughout, no flat-spots, just pure pulling power. Being a supercharged mill, lag is a mystery and the top-end is just frantic. But what’s the most to appreciate is how the Audi S5 behaves so civilised in the city, giving no hint of what it’s capable of. 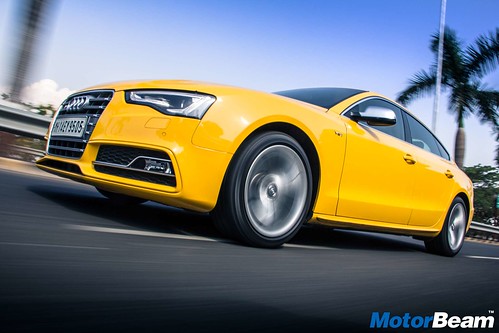 The Audi S5 gathers pace with utmost ease at all times

Ambling around town is easy, the Audi S5 being butter smooth refined and doesn’t lurch forward abruptly to throttle inputs, so one doesn’t need to be careful with the A pedal. But give it the beans and it takes off with no hesitation as the lack of lag makes it feel much faster than it is. Audi claims a 0-100 km/hr time of 5.1 seconds and we recorded a not so far off 5.67 seconds on our VBOX, so this might be a 6-cylinder engined car but it still is pretty quick. Top speed is limited to 250 km/hr. 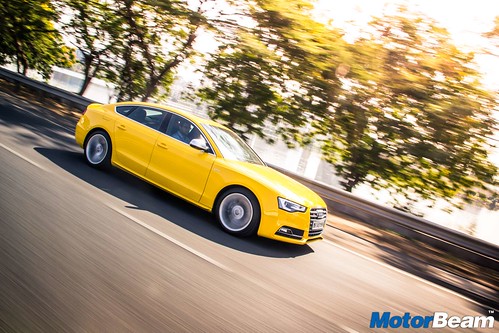 100 km/hr comes up in third gear while redline is at 6500 RPM, the noise from the powerplant being such a delight. The vehicle is vocal almost all the time and that’s thanks to the supercharger whine and perfect exhaust tuning. What can’t be missed is the backfire on upshifts and the 7-speed dual-clutch S Tronic transmission is super quick with shifts and just knows which cog to select every time. One can also manually take control of things using the steering mounted paddles. There is also a Sports (S) mode which can be selected on the gear lever (the other mode is D) and one can also slot the lever into manual by pushing it left. 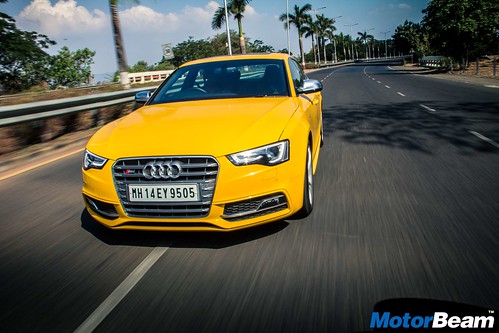 The vehicle comes with Audi’s drive select and it’s in Dynamic mode where everything feels so surreal. The gearbox is quicker with shifts in S mode and the engine holds to the redline in every gear and before you know it, you are fast approaching the double ton, phew. But if you want to take things sanely, you can get into top gear with the tacho just ticking in at 1600 RPM, so this makes for a comfortable cruiser. Slot the drive select in efficiency and with the auto stop/start working, the S5 can return a good 7 km/l, which otherwise drops to around 5 km/l when the scenery blurs fast. 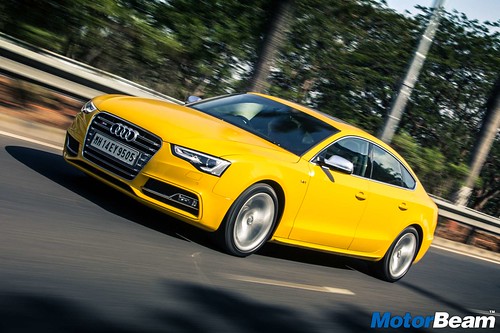 Driving Dynamics – The Audi S5 doesn’t get adaptive suspension so the Drive Select doesn’t alter the suspension which shouldn’t be the case considering this is a fully imported car. The ride quality is very good and the S5 is properly usable as a daily driver. The suspension being on the stiffer side works quite well and also ensures high speed stability is excellent. Since the S5 is a CBU model, no changes have been made to the ride height and one has to be extremely careful over bumps as it does tend to touch on big speed-breakers. 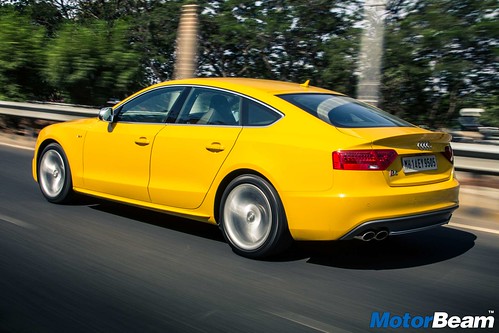 The S5 could do with sharper handling and better steering feel

Although not as sharp as one would expect, the Audi S5 is still quite fun

The handling of the Audi S5 is quite good, the chassis is old and that can be felt as it’s not razor sharp and the steering feels a bit lacking in feel, it’s just not as communicative as you would expect a S badged car to be. Power is channeled to all wheels via the quattro AWD system and the ESP isn’t intrusive in Sports mode, so you can do aggressive launches and also slide around a bit, in control of course. The brakes are strong and help shed speeds quickly. 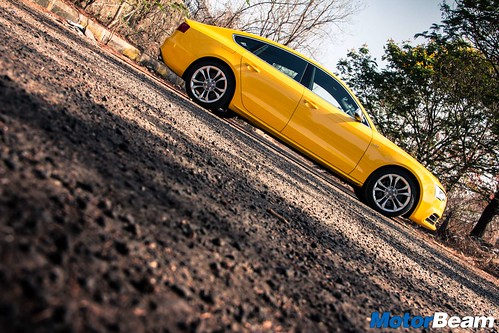 This German car is naturally loaded with safety tech

Safety and After Sales Service – The Audi S5 comes loaded with a ton of safety equipment such as ABS, EBD, ESC, ASR and sports differential lock. It also gets 8 airbags. Audi’s service in India is decent and although not as good as Mercedes-Benz, the R8 maker is slowly and surely expanding its network. The S5 is brought in via the fully imported route and thus spare parts availability can be a issue and one might have to wait a bit for non-running parts to arrive. 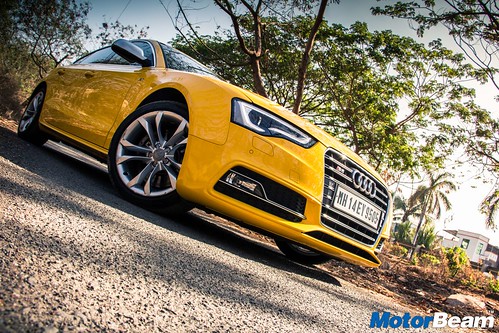 The Audi S5 makes for a great purchase for speed freaks

Verdict – The Audi S5 is a brilliant formula to get the best of both worlds. One can use this car every day while also have a lot of fun on the weekends as this vehicle is quite good in both the hustle-bustle of the city while a thrilling drive on the highways. It might not come cheap but it’s still priced attractively by fully imported performance car standards. Yes, the current S5 is based on the outgoing A4 but the next generation S5 will take fun and tech further up the scale. 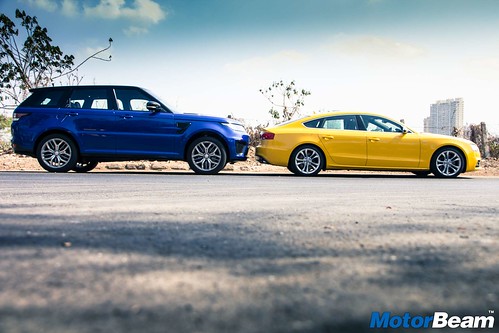 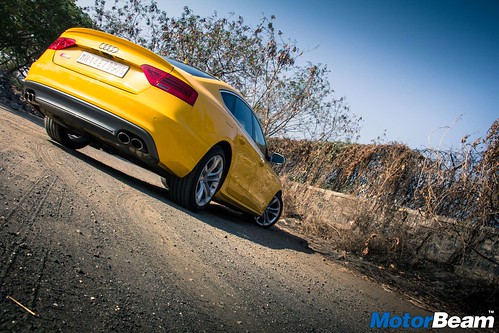 The Audi S5 will soon enter its second generation

“The Audi S5 is a great purchase for those who want a practical daily car which also turns hooligan when you want it to. The exterior doesn’t wow you and neither does the interior which feels dated now but drive this beast and you are sure to get impressed. I love the sound of the Audi S5 and the way it accelerates with absolutely no flat-spot in the powerband. This car is an excellent choice for those who want a performance sedan that isn’t very expensive.” – Faisal Khan, Editor, MotorBeam.
“The S5 is a perfect example of a wolf in sheep’s clothing. The exterior is very typically Audi but it looks particularly hot in this shade of yellow. It definitely excites with its performance with the supercharged V6 sounding very sweet at the redline. What really impressed me is that it is so sedate and nimble in the city making it a good choice for those who want to use a daily drive which can be heaps of fun when needed.” – Javeid Khan, Deputy Editor, MotorBeam.