Our roads have abundant autorickshaws and these 3-wheelers are a very popular mode of transport for short trips within the city. Millions of people travel by autos daily and while we car guys think that these 3-wheelers have created a menace on our roads, the fact is that they’re super convenient and the staple mode of travel for a significant number of people. However, these 3-legged vehicles aren’t exactly safe, they offer no protection to the passengers, they don’t have seat belts, heck no doors even and are known to be pretty disastrous in the event of a crash. Making matters worse is the fact that they don’t offer any protection from the harsh heat and rains too. In comes the Bajaj Qute, which was first showcased 7 years back at the 2012 Auto Expo. This isn’t a car, but it’s a 4-wheeler. Yes, the Qute is the first quadricycle in India and after a lot of controversies, the vehicle is finally going to be available on sale.

Motor Quest: The Bajaj Qute was first showcased to the public 7 years back but the vehicle was mired in controversies. A lot of companies were opposing the Qute and quadricycles in general because of the lack of safety features and hence Bajaj Auto couldn’t sell the Qute in India even though it was exported to and sold in other countries. However, the company was of the belief that this quadricycle is at least safer than the 3-wheelers plying on our roads. The quadricycle segment has finally been approved in India and the Qute can now be sold. 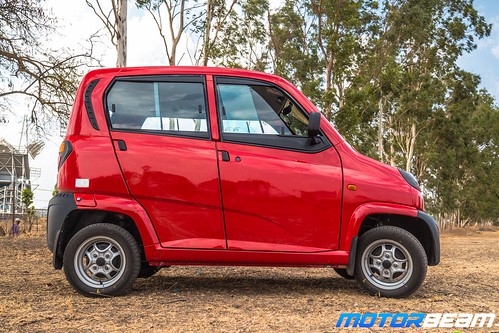 The styling is very quirky but it doesn’t look ugly

Exteriors – The Bajaj Qute isn’t exactly a looker, it looks quite basic but it definitely turns a lot of heads on the roads. The vehicle looks pleasing to the eyes but expect kids to gawk at the vehicle as if it’s a big new toy car. The Qute is smaller than the Tata Nano in size, has black chunky bumpers and tiny 12-inch tyres. The good part is that the vehicle gets alloys! The Bajaj Qute comes with a 4-door setup and there’s a small storage space (77-litres) up front because the engine is placed at the rear. The tailgate cannot be opened but you can access the engine through a lid in the rear bumper. The vehicle uses a monocoque construction but gets plastic body panels to keep replacement costs low and the automaker has used high strength steel to improve the rigidity of the Qute. 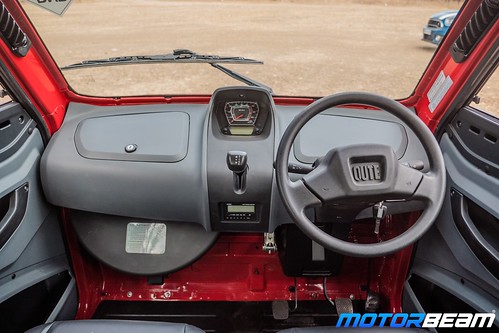 The cabin is rather simple with no features on offer

Interiors – Just like the exterior, the interior also has a very basic appeal. The cabin gets plastics all around and there are enough storage spaces up front. On either side of the dashboard, you get lockable storage bins while the front doors also have decent storage space, taking total front storage capacity to 95-litres. The seating position is set high, this plus the large glass area provides the driver with ample outward visibility. The vehicle gets a standard 2-spoke steering wheel, with the speedometer and a digital gear indicator at the top of the centre console. Sadly, the Qute misses out on an AC, in fact, it doesn’t even come with a fan and there are no vents on the dashboard. The only source of ventilation would be the windows and we expect a lot of owners to replace the sliding windows with fabric rollers (like the ones we see on rickshaws during monsoons). You get air vents on the A-pillars which basically throw out the air which is sucked in through vents on the front bumper. However, this setup isn’t very effective. 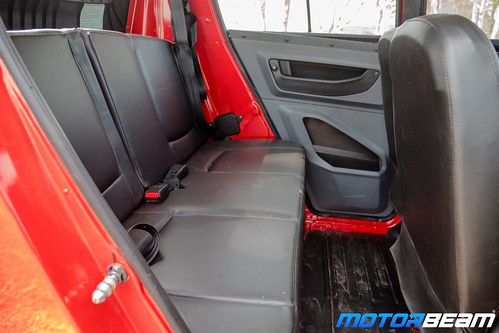 Space is decent for 4 passengers, but cabin isn’t very roomy

The Qute comes with a basic audio system with remote, but misses out on central locking. Ingress and egress is pretty easy at the front, but things get a little tight at the rear due to the small size of the doors. The front seats are placed very close to each other due to the limited width of the Qute. The front seats are just about average in terms of comfort, don’t forget this is a budget vehicle. The front seats can only adjusted for rake, there’s no recline or height adjustment. The rear seat also has enough space for 2 passengers, fitting 3 is a strict no-no because the Qute has been certified as a 4-seater. The rear doors also offer good storage space and behind the rear seat you get space to keep your laptop bag. The total storage space at the rear section of the cabin is 44-litres. The spare wheel is located in the front passenger’s footwell while the 35-litre CNG tank is positioned under the front seats, while this area can be used for storage on the petrol models. The handbrake is placed on the right side of the driver’s seat.

News highlights of the day include Triumph, Ola, Royal Enfield and Skoda. Triumph - The premium British bike maker is about to launch the Tiger   END_OF_DOCUMENT_TOKEN_TO_BE_REPLACED

Royal Enfield has developed new 350cc platform for future bikes. The coronavirus has let down the auto industry and the buyer sentiment.   END_OF_DOCUMENT_TOKEN_TO_BE_REPLACED

RE to bridge the gap between 350cc and 650cc motorcycles. Royal Enfield is the mid-size king in the domestic market. Their 350cc bikes are   END_OF_DOCUMENT_TOKEN_TO_BE_REPLACED