What we may think is mundane for manufacturers to introduce new 150cc motorcycles time and again, is actually a misinterpretation on our behalf. Honda and Bajaj are two such manufacturers in India that have had their fair share of success, which they owe it to the 150cc segment market. In February, Bajaj yet again added a 150cc commuter to its lineup, the V15 which surprisingly surprised us for the potential it possesses. Although being a 150cc, the V15 has no real competitor in its segment due to its uniqueness. However, given its technical specifications and pricing, the closest rival it has is the all not-so-new Honda Unicorn 150. The Japanese automaker recently revived its best seller at the 2016 Auto Expo held near Delhi. However odd the comparison seems, find out which one we think emerges at the top of this shootout.

Motor Quest: While the Unicorn 150 had been previously discontinued to increase the sales of the Unicorn 160, Honda has revived it again in hopes to regain their high selling numbers in the 150cc segment. Since Bajaj already has 150cc commuters in the market, it launched the V15 alongside the its other models and tagged this one as a ‘premium’ commuter. 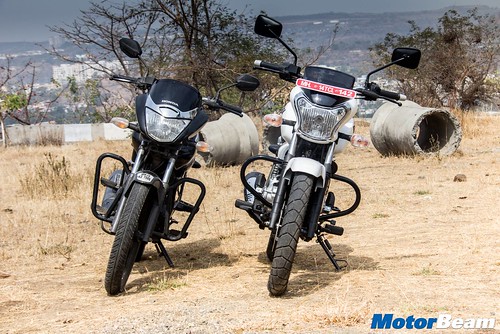 Styling – Both the bikes have distinctive styling features. While the Unicorn is more of a typical Indian commuter, the V15 has special design cues that kind of make it look like a scrambler bike. The 2016 Unicorn literally gets the same design from its older versions. The V15 on the other hand, gets a look that is relatively new to the Indian masses. With its low seat height, short wheelbase, a rather odd but interesting trapezoidal headlight, and the iconic fuel tank, the Bajaj V15 definitely is a winner in terms of contemporary innovation. 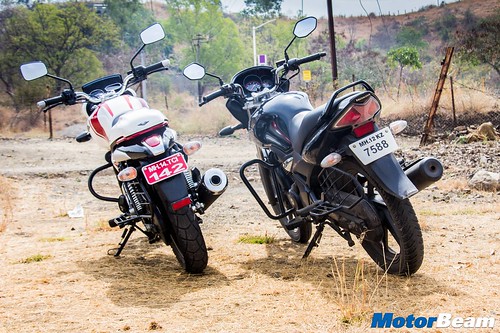 The Bajaj V15 looks rather awkward from the rear

While the makers of the Unicorn apparently intended its style to appeal to mature riders, the V15 seems to have set out on a similar mission. It does not boast of a lot of stickers, just like the Unicorn, but rather carries a much superior finish on its panels than the latter. Not a lot of stickers on both bikes, but the with the unconventional design cues on the V15, it looks subtly classier than the Honda. The colour scheme of the Bajaj V15 has been kept very simple with a dual-tone setting that beats the outdated styling of the Honda Unicorn 150. 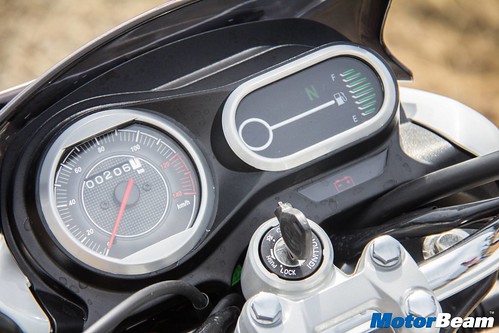 Instrument Cluster and Switchgear – The Bajaj V15 is somewhat a huge disappointment when it comes to the instrument cluster. It lacks that modern feel and has ugly visuals. The one on the Unicorn isn’t the best either; however it is a clear winner in terms of looks, legibility and functionality. While the Unicorn features the same old all-analogue instrumentation, the V15 boasts a rather awkward analogue-digital combination which misses out on a tachometer. Even the digital display doesn’t score for the V15 as it lacks daytime visibility due to a dim backlight. The one on the Unicorn, however, does look very neat and is easy to read for the layman. 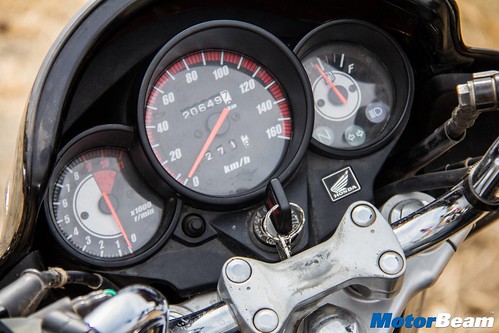 The full analogue console on the Unicorn displays more information 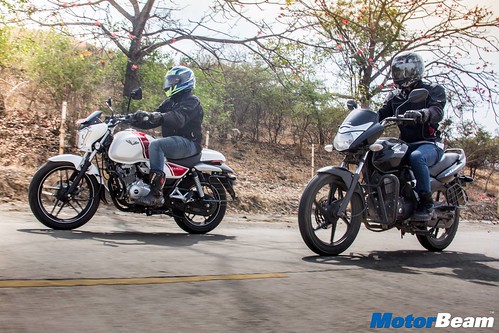 Both motorcycles are easy going and offer superb comfort

Ergonomics – The Unicorn 150 has led its segment throughout all these years and owes a lot of its success to comfortable ergonomics that appeal to the Indian masses. The V15 however, carries the Unicorn’s game ahead and offers similar ergos that come with a lower seat height. Both bikes have front biased footpegs while the handlebar on the V15 is a bit lower. The seat dimensions are more or less similar on both bikes with the cushioning being a bit on the harder side on the Bajaj. Overall, both bikes have a little laid-back feel and feel relaxed. 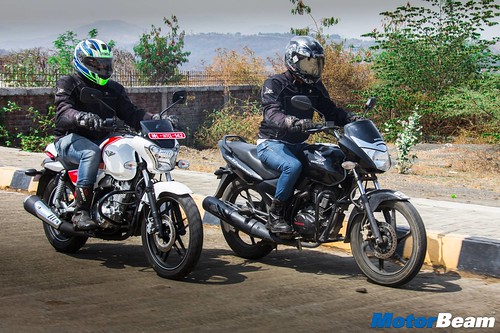 The Honda Unicorn seats you slightly taller than the Bajaj

Functionally, the pillion seat on the Bajaj V15 does have grab rails but are very oddly placed. Although the pillion seat on the Unicorn is a tad bit higher, the easy to use grab rail doesn’t seem as intimidating as that of the V15’s. A bizarre thing about the seat cowl on the V15 is that its removal will create an awkward situation when a pillion will unexpectedly tag along; there would be no space to keep the cowl and the two screws that fasten it, unless it is held on to by the pillion himself which doesn’t sound comfortable at all. But the cowl sure does look cool! 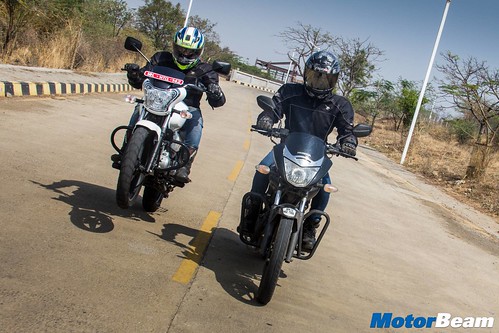 Both bikes have ample punch to get you around town

Performance – Both these motorcycles feature a 149cc single-cylinder air-cooled engine. The Honda being more powerful of the two, produces 13.84 BHP at 8500 RPM as opposed to the 11.83 BHP at 7500 RPM of the Vikrant. The V15 housing the slightly longer-stroke engine than the Unicorn, produces a maximum torque of 13 Nm at 5500 RPM which is marginally greater than the 12.84 Nm of the Honda. Both bikes primarily being commuters, pop out decent numbers and run comfortably. Mileage wise, there is little to differentiate between both these bikes which will return around 55 km/l. 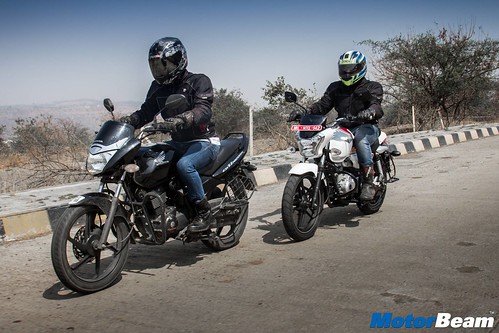 The Unicorn feels more powerful than the V15 on open roads

The V15 has an impressive punch at lower speeds thanks to its higher torque-to-weight ratio than that of the Unicorn 150. However, this is only true up until 65 km/hr after which the V15 feels breathless and takes forever to reach the 100 km/hr top speed. The Unicorn on the other hand feels much relaxed at higher speeds due to its tall gearing and higher power. The V15 has a pretty deep exhaust note while the Unicorn has that typical crisp Honda sound. Along with the lack of performance, the vibrations coming from the engine on the Bajaj are prominent once the bike crosses the 65 km/hr mark. Vibrations can be felt on the footpegs and start creeping in on the seat as well. The Honda Unicorn in this matter feels much refined and is capable of commuting comfortably at higher speeds. 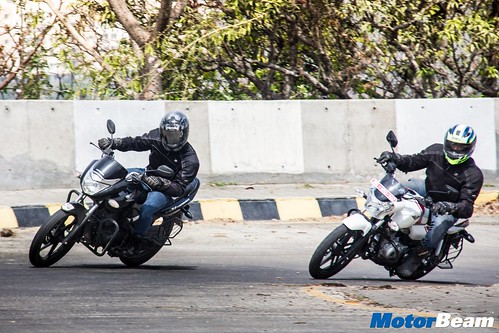 Both bikes have their own strong points around corners

Riding Dynamics – Both bikes being primarily commuters, ride pretty much the same. The overall lower weight concentration of the V15 slightly gives it that edge but its tyres aren’t as grippy as the MRF rubber on the Unicorn. The V15 with a slightly shorter wheelbase manages to turn-in quicker than the Unicorn and feels comparatively nimble than it. However, the tyres give in easily and confidence in corners is not as much as that on the Unicorn. The gear shifts are a little hard on the V15 especially with the all-up pattern which apparently is welcomed by the conventional layman while the Unicorn houses the standard 1-down, 4-up gearbox which feels better to operate. 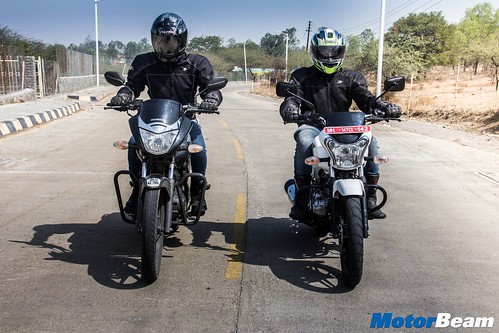 The Bajaj V15 has a slightly harsher ride quality when compared to the Unicorn 150. The rear dual-suspension feels stiff while the monocross suspension on the Honda stands out as it does an excellent job in typical Indian road conditions. Overall, the ride quality on the Unicorn feels much better in comparison with the V15. The brakes on the V15 lack the initial bite and do not provide necessary feedback. With a similar setup on the Unicorn, it wins over the V15 in this aspect. 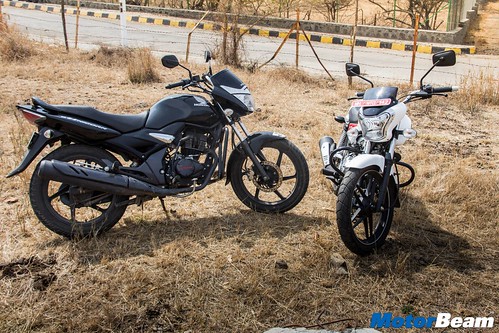 Verdict – The commuter motorcycle market is becoming more and more competitive with each new product pouring in and each one of it has so much to offer. While Bajaj has purely kept in mind the layman while designing the V15, the Honda Unicorn still remains something that is loved by all. Both these bikes offer almost the same hardware, performance and comfort. While the Honda Unicorn 150 wins this shootout only by a small margin, it all boils down to which brand you’d like to see in your parking lot? 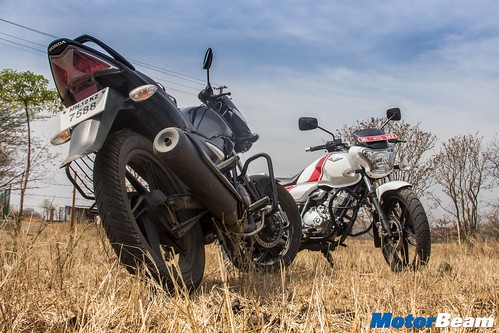 “Both these motorcycles aim squarely at the middle-aged commuter buyer who wants a good mix of city performance and efficiency. While the Honda Unicorn 150 has been on sale long enough to boast of its bullet proof reliability, the Bajaj V15 brings some excitement to the mundane segment where choices are made based on mileage and price. Among the two, the retro inspired model feels like the more exciting bike.” – Faisal Khan, Editor, MotorBeam.
“The Honda Unicorn has been a primary choice for a lot of people since the time it was introduced. Even after the recent update, people were keen about the older Unicorn due to the comfortable ride quality it offered. The Bajaj V15 is a new premium commuter and it surely competes with the Unicorn. Both have a refined engine while the Unicorn is a silent player, the V15 has the best exhaust note ever heard on a Bajaj.” – Dhanil Vira, Road Tester, MotorBeam.
“The V15 is a very interesting bike. Although it offers nothing more than what the Unicorn does, it has a very unique feel. The Unicorn is of course a better bike in a few aspects, but I feel the V15 has a certain charm to it which I’ve never felt in any bike in Honda’s Unicorn series. Engine vibrations, poor console and a few other bits make the V15 lose this shootout against the well established Unicorn 150.” – Adwait Babras, Road Tester, MotorBeam. 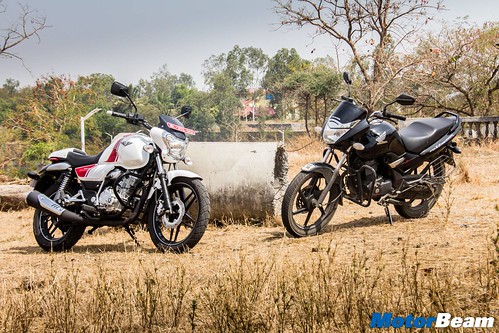 Indian or Japanese, which one would you pick?