Over the past decade, motorcycling has taken a giant leap in India with people no longer buying bikes to just get from point A to point B. One part of this culture is touring and there have been few alternatives for those who want to ride across cities. While the lower and mid end of the market has almost nothing to offer, it’s really the high-end segment where bikes being brought in via the CBU route offer touring capabilities. But that is set to change as the most affordable tourer is all set to arrive in India and it’s an Italian beast, the Benelli TNT 600 GT (called BN 600 GT in certain markets). You might say that a 600cc middle-weight motorcycle won’t have enough pep to keep touring stress free (because you ride with a pillion and some luggage which adds to the weight) but the TNT 600 GT isn’t another 600cc bike, it is powered by an in-line 4-cylinder engine, did we suddenly catch your attention? We are sure we did because the Benelli TNT 600 GT sure caught our attention as it’s an out of the ordinary offering. A half day 300 km ride helps us judge its touring abilities.

Motor Quest: The Benelli TNT 600 GT is the touring version of the 600i street-fighter with both of them set for sale in India. While the TNT 600i made its debut in 2012, the GT version was launched globally only last year. 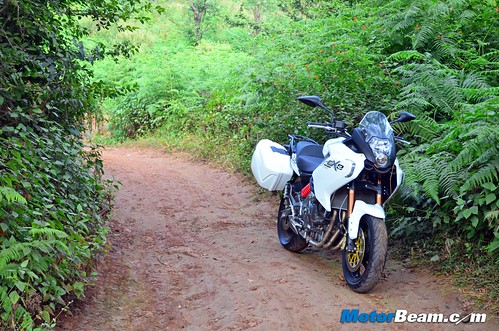 Styling – The design of the Benelli TNT 600 GT has a striking resemblance to the Kawasaki Versys and both these bikes compete against each other in quite a few markets (where the Versys 650 is offered). While underneath everything is similar to the 600i, Benelli has done a good job to distinguish both models as the 600 GT has little in common (in terms of appearance) with its street-fighter sibling. The bike gets a projector headlight making it the only Benelli model to feature it. With neat fairing mounted turn indicators and large overall dimensions, this Benelli doesn’t appear too stylish but it does have presence. A large fuel tank has Benelli logos placed on either side while the side profile reveals the underbelly exhaust and red finished offset monoshock. 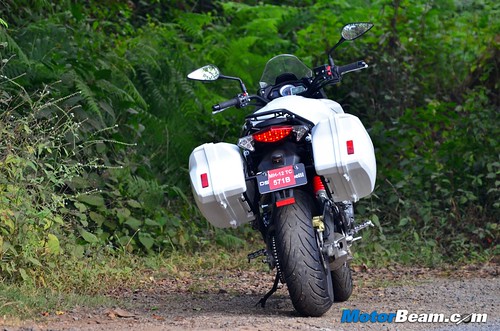 While the TNT 600 GT does have a full faired design, there isn’t too much of body work with lots of exposed bits, the one at the front reveals the radiator resulting in the head-on appearance being a bit awkward. One can easily see the four exhaust pipes coming from the engine and those are very much in sight although the heat produced from them don’t reach the rider. The rear gets a nice tail light assembly with indicators being flanked around the brake light. Being a GT, the bike comes with hooks to attach luggage carrying accessories and our test bike came equipped with optional lockable panniers on each side which are easy to attach and remove. One does have to be careful when manoeuvring because of them as they stick out. The TNT 600 GT then, doesn’t wow you with its design (which an Italian bike should) but is thoroughly purposeful in appearance. 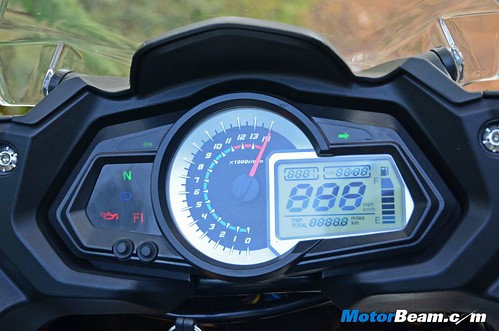 Instrument Cluster and Switchgear – The Benelli TNT 600 GT has an semi-digital instrument cluster as the tachometer is thankfully analogue while everything else is digital. The bike gets a large LCD display with speedometer, odometer, fuel meter and clock on it. The buttons to toggle the display are a bit hard to use and there is no gearshift indicator. Tell tale lights are displayed to the left of the tachometer which doesn’t look modern with the colours used on it. On start-up, the needle does the customary swipe all the way to the top. Switchgear quality is good, the bike gets daytime running lights which is the low beam and thus there is only a switch to toggle low and high beam. Light throw is excellent thanks to the projector set-up and the bike also gets hazard lights. 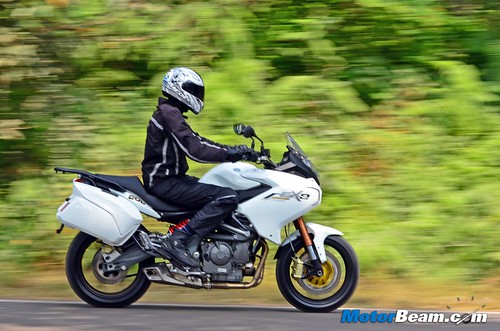 Ergonomics – The big USP of the Benelli TNT 600 GT are the ergos, this bike is extremely comfortable and one can stay on the saddle for long hours without breaking into a sweat. Nice and comfortable seats with an easy handlebar position ensures you munch miles effortlessly. The windscreen does curb windblast to quite an extent while the pillion seat has good room to seat someone for long distances. The bike gets slightly small mirrors but they still manage to give a good view of what’s behind. The Benelli also gets an adjustable brake lever with the levers being machined for a better feel. The pegs are made of alloys. 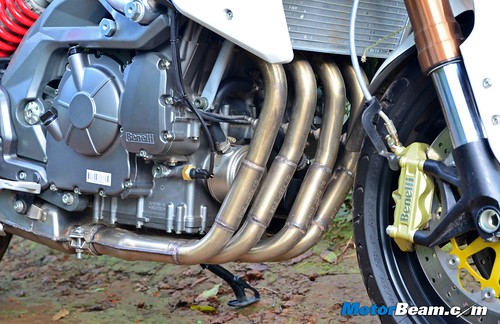 Performance – While the Benelli TNT 600 GT looks sober in appearane, it is powered by a hooligan of a motor which has been tamed down to keep in line with the positioning of this motorcycle. The same 600cc, 4-banger has been picked from the mad street-fighter 600i but has been tweaked and produces its peak power and torque output much earlier. With 85 horses on board, the TNT 600 GT is no slow couch and has 54.6 Nm of torque on tap. Crucially though, there is plenty of low-end pep but it’s the higher end of the motor that truly shines. 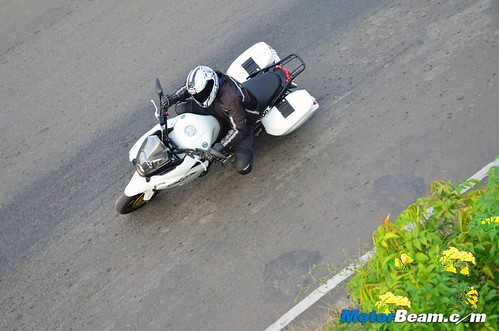 The Benelli TNT 600 GT doesn’t disappoint when you ride it by redlining in each gear as the motor gives you the kick in the pants feel by taking off in jiffy once you hit the 7500 RPM mark. It isn’t as brutal but it sure is enough for you to go alert and appreciate the performance this Italian tourer has to offer. The 6-speed gearbox is smooth shifting and so is the clutch which has the right feel to it. In-gear acceleration is another standout of the TNT 600 GT, it can pull in top gear from as low as 30 km/hr while 0-100 km/hr takes just 4.1 seconds. Redline comes in at 11,000 RPM and the surge near the redline is addictive. The big USP of the Benelli TNT 600 GT is the fuel tank capacity, it can store 27-litres of petrol, giving it a terrific range of 500 kms plus. Mileage is 20 km/l which is good considering the weight and performance of this GT bike. 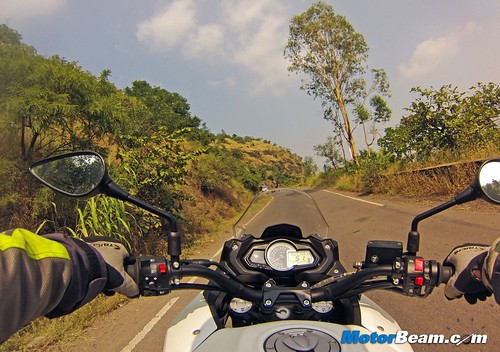 Being a 4-pot motor, refinement levels are terrific and on the whole the bike is super smooth. Clutch-less upshifts and downshifts work terrifically well and a quick downshift is enough to make you whizz past anyone on the road. While the 600i sounds absolutely sinister, the GT isn’t as loud or brutal but still carries the sweet melody of a 4-cylinder mill. Running a 4×1 exhaust which is placed underneath, the sound isn’t as amplified which is sure to be appreciated by customers of this bike. Heat dissipation is top class so you never feel a thing on you and remain cool even after a long ride. 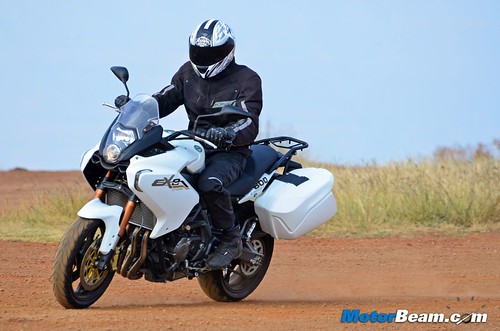 In spite of the heavy weight, this Benelli is at home around corners and stays planted

Riding Dynamics – The underpinnings of the 600 GT are from the 600i but the set-up is in favour of comfort. Despite that, this Benelli handles quite well and remains planted through corners with its Pirelli Sport Demon tyres offering acres of grip. The steel trestle frame works well to give the GT a good balance between ride and handling, with the motorcycle absorbing most bumps thrown at it with relative ease. The bike uses upside down forks at the front while the rear uses an adjustable monoshock and an aluminium swingarm, the set-up being moderately stiff to ensure there is no bounciness at high speeds. 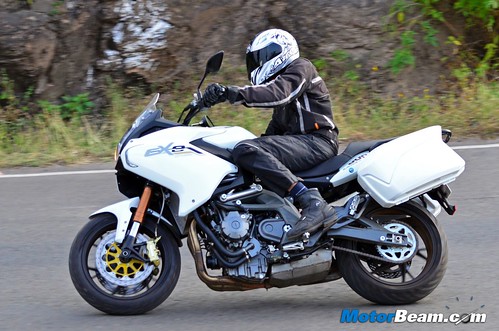 Due to the dimensions and the hefty 243 kgs weight of the bike, the Benelli TNT 600 GT isn’t as eager to corner and takes a bit of an effort to turn-in although the steering is relatively quick for a bike of this category. The panniers on our test bike further added to the weight and that definitely made manoeuvrability difficult, more-so when taking u-turns. The fairing and windscreen also helps deflect wind very well and thus the GT 600 is very stable at speed, the weight only adding to the composure of the motorcycle. Braking performance is adequate with good feel at the levers adding to confidence while braking hard, ABS would have been welcome though. 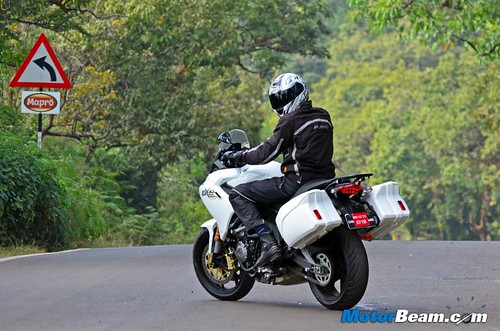 Verdict – Benelli says that the TNT 600 GT “can be considered as a viable alternative to the car” and we quite agree with them. This motorcycle offers tremendous comfort while having a lot of performance on offer to make quick progress on open roads. With good hardware on board and a nice set-up of the suspension, the touring centric Benelli can cruise in style and comfort while also giving riders the ability to carry their luggage with no fuss at all. Looking at our road conditions, the Benelli TNT 600 GT is sure a practical offering for the most of us.

Do you crave for comfort on a motorcycle but still want a lot of performance? Do you rate ride quality over handling? If yes, then the Benelli TNT 600 GT is an excellent option for those who want to explore new places hassle-free. 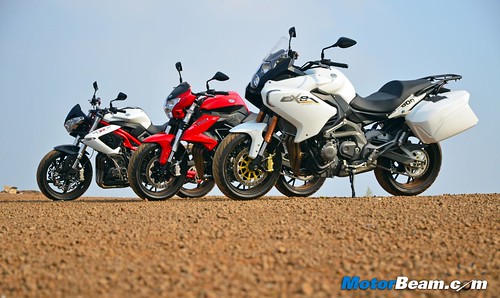 * City manoeuvrability
* No ABS even as an option 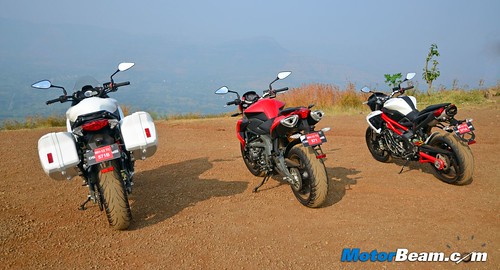