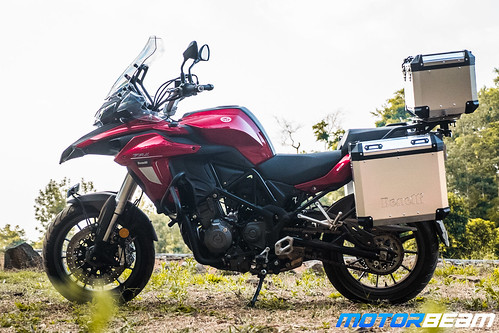 Ergonomics – The seating posture is upright and the footpegs are slightly front-set making it quite comfortable. The TRK 502 has a seat height of 800 mm which is easily accessible by all kind of riders. I was able to flat-foot on the TRK 502, but the 502X has a seat height which is 40 mm taller. The increase in height is just 30 mm but the seat is almost 10 mm thicker adding on some extra height and cushioning. The seats are quite comfortable and the pillion would just love to be onboard. However, with the panniers, getting on and off is a little bit of a hassle for the rider as well as the pillion. Mirrors are quite useful on both the bikes but the visor upfront isn’t crystal clear and it doesn’t really help the rider see through it in off-road conditions. 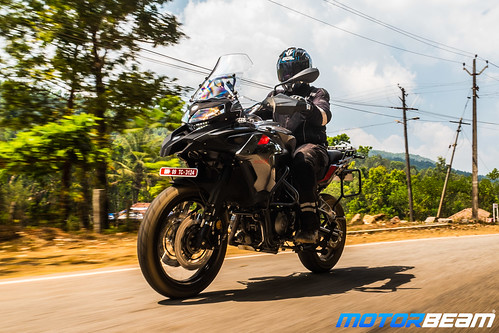 Performance – Powered by a 500cc, parallel-twin, liquid-cooled engine, the TRK 502 produces 47.5 PS of power at 8500 RPM and 46 Nm of torque at 6000 RPM. The throttle response is decent enough while the powerband is all in the top-end. There is a good low-end to stutter around but the motor lacks a mid-range punch. Between 4000-6500 RPM, the power just dips and the revs build up quite slowly on a rolling throttle. Although, the bike reaches the ton in the third gear itself and can cruise at 100 km/hr on the top gear at 5500 RPM. The 502 can achieve a top speed of 170 km/hr while the 502X can do up to 162 km/hr. There is a difference as the 502X has two extra teeth on the larger sprocket for better off-road. One can achieve up to 27 km/l but if pushed hard and fast, the mileage drops down to 20 km/l. 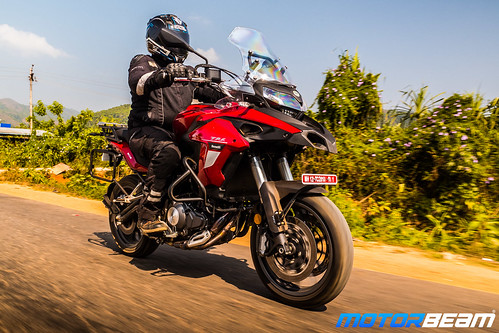 The power delivery is quite linear all around

The exhaust note from the parallel-twin is mind-blowing, sounds like an inline-4

The clutch weighs up nicely but does not hurt the palms in an on-off riding situation. Gear shifts are quite crisp, however, clutchless shifts are not recommended. At idle and below the powerband, the motor feels quite smooth but as the revs build up vibrations start kicking in. Post 6000 RPM the rider can feel the buzz on the footpegs, seat and the handlebar. There is no harshness what-so-ever and neither is there any kind of unwanted noise coming in. The exhaust note is just brilliant while the one on the 502X is slightly louder too. The engine might not be an extreme performer but it has a jaw-dropping note to it. 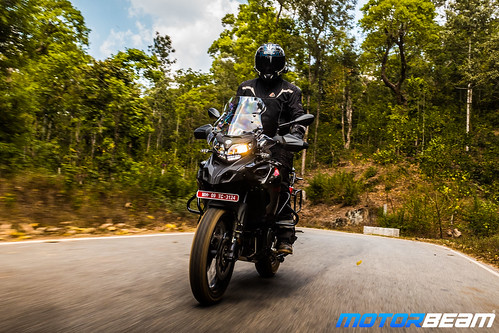 The TRK 502X is a more fun-to-ride motorcycle

Riding Dynamics – Both the 502 and the 502X translate the difference in the dynamics very well. The bikes are feedback rich while the road going 502 stays much more planted on tarmac and tips in to corner really well. The 235 kgs of gross weight does help the motorcycle hold its line well. While the same case is for the 502X in off-road situations, it feels slightly heavy but in control most of the times. The thick 50 mm front inverted telescopic forks are stiffly sprung while the rear monoshock has rebound adjustments. One can play around with the suspension settings and can get the perfect ride for any situation. The ergonomics have it right and are very comfortable for touring duties. However, the tank might bother to a few as it hits the inner thigh if anyone is standing up while riding. 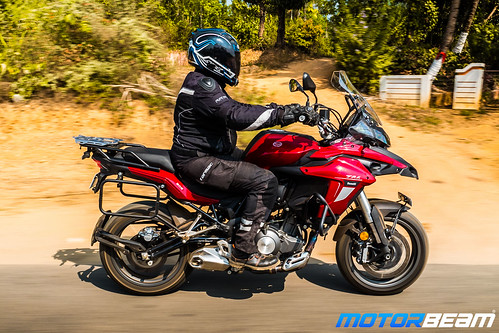 The TRK 502 is equipped with Pirelli rubber while the 502X gets dual-purpose Metzeler rubber. The tyres on the 502 are thicker and perfect for tarmac and touring purpose while the Metzelers are slightly thinner and do well for good or bad roads. However, they tend to lose grip if the road gets really bad. Equipped with dual-channel switchable ABS, the 502 gets regular radial discs and calipers. While the 502X gets petal discs and floating callipers, both the bikes get same-sized discs and calipers. Under heavy braking neither of the two nose dive and the feedback from the brakes is commendable. It takes effort to stop these heavy bikes and the brakes do their job well.

News highlights of the day include Suzuki, Volkswagen, Toyota and F1. Suzuki - The Japanese bike maker has introduced new ‘Suzuki at your   END_OF_DOCUMENT_TOKEN_TO_BE_REPLACED

A bakery employee from Coimbatore stole a motorcycle to travel to his native place. The ongoing coronavirus pandemic has affected everyone's   END_OF_DOCUMENT_TOKEN_TO_BE_REPLACED