Touring capabilities with a hint of adventure? Both these bikes are loaded to go places you can only think of

The adventure bug has bitten almost everyone out here. The market is changing and the brands are going forward with the introduction of accessible adventure-touring motorcycles. A few years back, Royal Enfield introduced the Himalayan, a motorcycle that could go places! While in the first few months, it had a few issues of its own but there were a few updates which made the bike better. BMW, on the other hand, entered the mass market with a pair of sub-500cc motorcycles. One of which was the G 310 GS, an entry-level adventure motorcycle. We had a small test ride a few months back but then a proper road test and comparison with the Himalayan was awaited and here it is.

Motor Quest: Royal Enfield launched the Himalayan back in 2016 but then the issues with the BS3 variant halted production. Re-launched with BS4 compliance, the Himalayan came back in 2018 and few more variants were introduced. BMW launched the G 310 GS, an entry-level adventure motorcycle in November 2018 in India. While it was already on sale in international markets since the start of 2018. 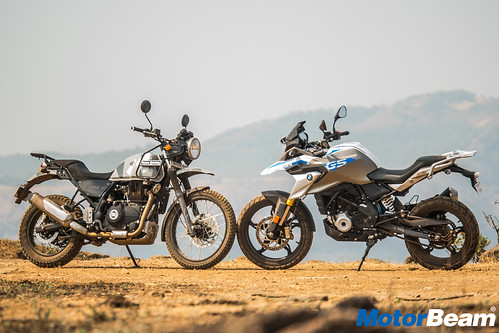 The BMW is handsdown more attractive than the Royal Enfield

Styling – Since the launch, there have been very little changes in the styling of the Royal Enfield Himalayan. Here, we have the Sleet model which has a camouflage finish on the body panels. As the aesthetics go for adventure off-road motorcycles, the body panels are very few. Long travel suspension and spoked wheels add more to the off-road nature of the bike. While the traditional round headlamp is mounted straight and the motorcycle gets a high raised handlebar. The Himalayan also gets a metal skid plate for a more rugged feel. While all the lights are halogens, the Himalayan, as well as the GS, get LEDs only in the tail-light. 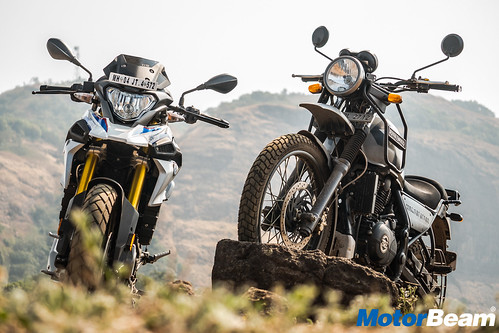 Both the motorcycles are attention seekers, while the Himalayan is common, the BMW is a rare spot

Both the motorcycles get an exposed chassis but the one in the BMW is covered by an off-road fairing. While there is minimal amount of bodywork on the Himalayan, the GS is loaded and it looks like a bigger bike. It gets alloy wheels but is equipped with wider dual-purpose tyres. While everything with the BMW is more jazz, the golden upside-down forks just grab all the attention and look surreal. Both the motorcycles get extended grab-rails but the one on the GS look better and are more purposeful too. 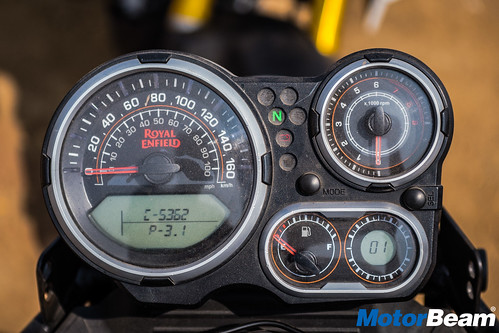 Most advanced instrument cluster ever seen on a Royal Enfield

Instrument Cluster and Switchgear – The instrument cluster on the Himalayan is an analogue-digital unit while it is the most advanced unit we’ve seen on a Royal Enfield. It displays a ton of information and has a compass too. The cluster has text and details all over and it goes very well with the design of the bike. The text is slightly small and feels cluttered but it’s easily readable once you get the hang of it. The switchgear quality is also decent but does not feel up to the mark. The BS3 version had a hazard light switch too which has been taken off in the BS4 model. 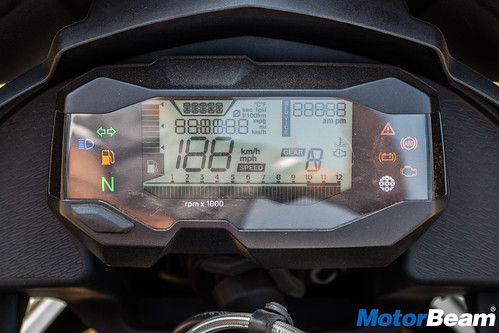 Smaller LCD but readable text, BMW’s console is quite practical

The instrument cluster on the BMW G 310 GS is a completely digital unit. It is the same unit as the BMW G 310 R but is mounted on the fairing and has a better view. It displays a ton of information too, like the engine temperature, distance to empty, live and actual mileage indicator along with all the basic information. The switchgear is also shared with the street-fighter sibling but the left-hand unit gets an extra switch. As for the purpose, ABS can be switched off with the extra button. The quality of switchgear and the overall fit and finish is much better on the GS. 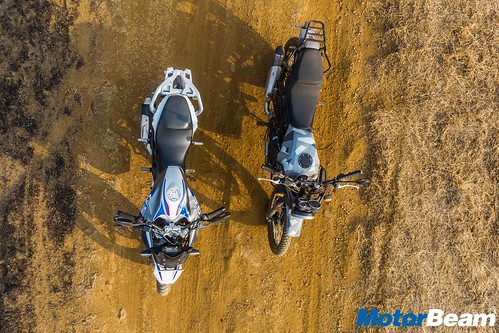