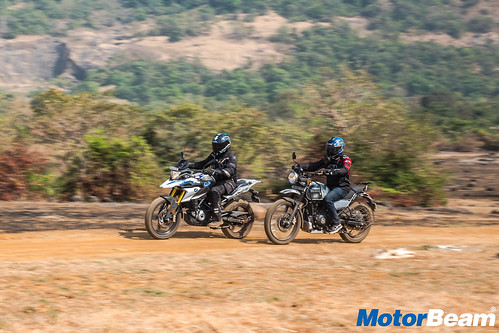 The G 310 GS has a brilliant top-end punch, comparatively

Performance – If we compare the numbers, the BMW G 310 GS is more powerful but the Himalayan is more torquey. And in off-road riding conditions, torque always comes in handy. But if we talk about touring capabilities, the GS can do triple-digit speeds in a more comfortable manner than the Himalayan. The 411cc motor has a very good low-end and mid-range. But the BMW’s 310 has a better top-speed and redlines way quicker than the Royal Enfield. The gearing feels taller on the Himalayan and hence the 5-speed unit does the job just as well as the 6-speed unit on the GS. While the motor on the Himalayan is air and oil cooled, the reverse inclined engine on the GS is liquid-cooled. But in the complete test, we could feel more heat being passed out from the GS as it has a slightly higher compression ratio than the Himalayan. 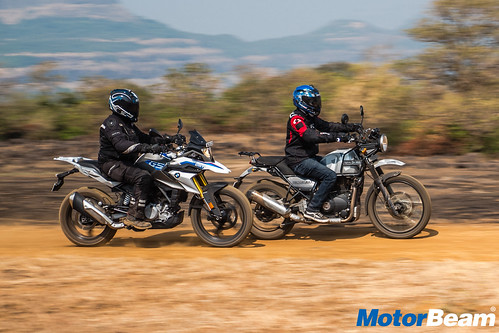 Himalayan’s engine has great mid-range and is similarly refined

Both these motorcycles have a dissimilar exhaust note, the Himalayan sounds better than the G 310 GS even at idle

During the complete test on-road as well as off-road, the G 310 GS returned a real-time fuel efficiency of 24 km/l while the Himalayan returned around 21 km/l. The tank range becomes almost the same as the Himalayan has 4 extra litres than the GS. Both the bikes don’t get a slipper clutch while the clutch action feels light on the GS, it is quite heavy on the Himalayan, the gear shifts are also better on the GS. The exhaust note, however, is better on the Himalayan even at idle or going all-out. NVH levels on both the motorcycles are pretty decent and both the motorcycles have vibrations creeping in at higher revs. With the extra plastic panels, the GS is more prone to vibes. 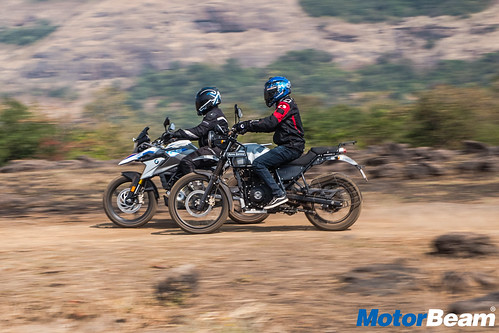 The GS has a frantic nature, pulls ahead always

Riding Dynamics – The G 310 GS and Himalayan have a tubular chassis setup but the BMW steel frame is more rigid than the duplex-cradle on the Royal Enfield. The GS stays lighter than the Himalayan even after being bulkier. The weight difference is more than 12 kgs and it makes quite a difference in the dynamics. Riding on the tarmac, the GS leans and flicks almost like its street-fighter sibling while the Himalayan is slow to respond. Straight-line stability is also better on the GS as compared to the Himalayan, thanks to the 41 mm USD forks at the front. The suspension setup is soft on both the bikes and both have a commanding feel while riding but the GS is more suited for road riding than the Himalayan. 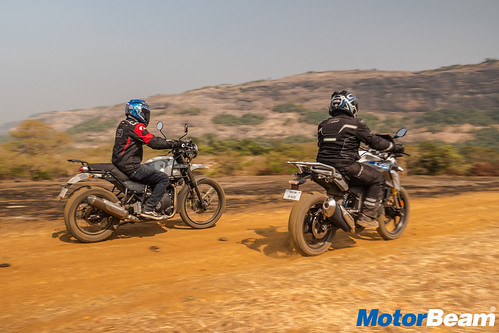 The Himalayan is more comfortable and suited to shorter riders

Once off-road, the true colours of the Himalayan show up as the suspension setup and the tyres give it more confidence to go hard and fast. The extra weight also helps to keep the bike down and the lower seat height makes it more comfortable for shorter riders to get the perfect off-road riding posture. The Ceat rubber on the Himalayan is thinner but the tread is deeper making it more usable. It also gets a larger 21-inch tyre making it an easy go on all possible surfaces. The GS, however, gets Metzeler dual-purpose rubber which is wider but does not have a deep tread which is more suitable for Indian road conditions. However, the GS has a more lockable posture for stand-up riding too but the Himalayan is sleeker and feels immediately confident off-road. 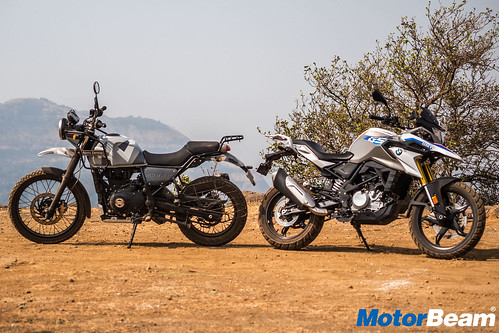 Both the bikes speak for adventure all the time

Verdict – The BMW G 310 GS is exactly double the price of the Royal Enfield Himalayan. While the Himalayan is purposeful and practical, the GS is premium and attractive. Royal Enfield feels rugged and has a ‘can do anything’ attitude but the BMW isn’t left out as it gives the best of both worlds. It is a mild off-roader while a brilliant motorcycle on the road. If the budget permits, with the extra money you can buy another Himalayan or else invest it in a premium brand. The winner of the shootout is clearly the Himalayan as is offers a lot more at half the price. But if someone can afford and would like the jazz of a premium brand, the BMW G 310 GS is a great motorcycle to buy under Rs. 4.5 lakhs! 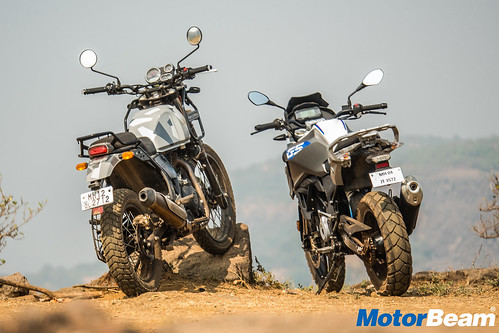 For the price, the Himalayan feels well worth it

“Ride both these motorcycles back to back and while the Royal Enfield Himalayan surely will impress you with its ride quality and off-road ability, it’s the BMW G 310 GS which will truly put a smile on your face for it is just the better engineered product here. Faster, smoother and with better hardware, the GS might not be a true BMW but still feels a lot better than its rival here, but at twice the price, the Himalayan simply shells out unbelievable value for the money.” – Faisal Khan, Editor, MotorBeam.
Pages: 1 2