Compact SUVs are definitely the flavour of the season, thanks to the practicality they offer.

A couple of years ago the concept of a compact SUV wasn’t that well known in India, mostly because there was no good alternative in the market. Buyers on a budget had only two options – Tata Safari and Mahindra Scorpio, which although not compact, came at an attractive price. However the big dimensions, unknown reliability and average dynamics made people shy away from SUVs. India being an SUV loving country immediately took to compact SUVs. It all started at the 2012 Auto Expo, when Maruti Suzuki, Ford and Renault showcased the XA Alpha, EcoSport and Duster respectively. While India’s largest car maker is yet to put its compact SUV on the roads, Nissan took a leaf out of Renault’s books by badge engineering the Duster, re-naming it as the Terrano. The Ford EcoSport, Renault Duster and Nissan Terrano are three compact SUVs which are very popular but which one should you buy?

Styling – The Renault Duster has started to show its age, after all it has remain unchanged since the time of its global launch in 2010. The Nissan Terrano is unmistakably a Duster underneath, as can be seen in the dimensions and the side profile. However the changes made by Nissan on the Terrano have paid huge dividends, at least in the styling department and the vehicle looks extremely attractive and macho unlike the Ford EcoSport which does come off as a hatchback on steroids. The EcoSport has aggressive styling with good attention to detail but Nissan’s SUV elements on the Terrano do make it shine out on the road. The bigger dimensions and the inspiration from bigger Nissan SUVs make the Terrano our pick in the styling department.

Interiors – Walk into any SUV and you will find a big difference between the three. While the EcoSport looks more contemporary with its big dashboard and comfortable seats, the Duster looks a bit too plain and the Terrano is right in between, offering both appeal and ruggedness. The EcoSport although well put together doesn’t feel as solid as the other two cars here. Quality in the Nissan is easily the best and the piano black finishing is certainly appealing. In terms of space, the EcoSport lags behind as both the Terrano and Duster offer abundance of room for both the front and rear passengers, even boasting of a bigger and more usable boot. The Duster and Terrano also lead when it comes to visibility while the EcoSport has quite a few blind spots. So in terms of cabin space, the Duster and Terrano are equally matched and better than the EcoSport, as you can easily seat five in the Renault-Nissan while the EcoSport is best for four passengers. 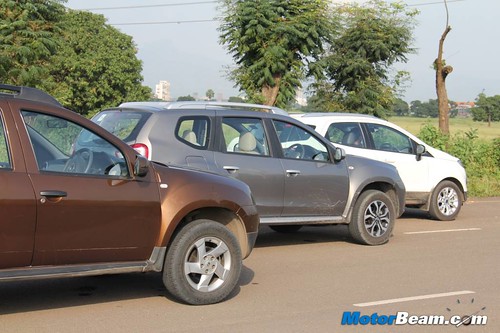 Where both the Renault Duster and Nissan Terrano fail to impress are the ergonomics. Some of the button placements are ridiculously wrong and you take time to find them. The Ford EcoSport not only trumps the other two SUVs in terms of ergonomics but totally annihilates them when it comes to standard equipment. Although the Duster and Terrano are more expensive, they don’t offer the level of equipment which the EcoSport carries. The Ford comes with six airbags, button start, climate control, SYNC, leather seats, etc. The Terrano lacks steering mounted audio controls and touch screen audio system which is a shame as it’s pricier than the Duster which comes with these features. If there is any consolation then one must applaud Nissan for giving a driver side airbag as standard in all variants. Overall, the EcoSport is our choice for offering a more appealing cabin which is loaded with equipment but if you travel outdoors frequently, then the Duster is our pick (same interior room as the Terrano but with more features at a lesser price). 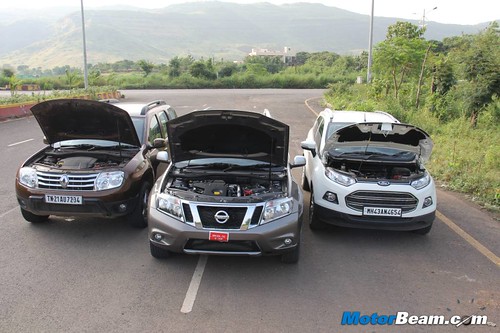 Performance – Before we dwell deep in the performance of these compact SUVs, let us crown the Ford EcoSport as the winner if you are looking for a petrol powered SUV. The 1.6-litre petrol engine powering the Terrano and Duster are no match for the award winning 1.0-litre EcoBoost engine. That is the reason you don’t see any petrol powered Dusters on Indian roads. Ford’s pint sized mill is not only frugal but a complete hoot to drive and if you are on a budget, then the 1.5-litre Ti-VCT equipped EcoSport is considerably cheaper and better equipped too. The EcoSport is the only car here which comes with an automatic gearbox, that too the terrifically well engineered 6-speed PowerShift. So yes, if you want a petrol SUV, the EcoSport is by far the better choice amongst the three. 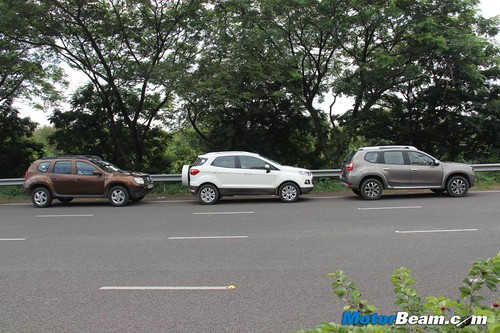 Both the Renault Duster and Nissan Terrano are largely going to be sold in diesel avatar, that is the reason both companies offer just the base trims for the petrol model. The EcoSport has only one diesel engine while both the Terrano and Duster get two diesel engines each. When we compare the 85 PS diesel engine powering the Terrano and Duster against the EcoSport’s 90 PS unit, we find the Ford to offer better performance although not by much. The EcoSport’s gearbox is slicker shifting too and that tilts the favour towards the Blue Oval as the 85 PS Duster and Terrano have a notchy gearbox. However if you want a diesel SUV which never feels out of breath on the highways, the Duster/Terrano 110 PS is worth considering. They are priced significantly more but offer terrific high-end performance and give a definite shove every time you whizz past 2000 RPM. However you will have to deal with a heavy clutch and high turbolag which is a pain in stop-go traffic. Overall, when it comes to performance, the EcoSport is our pick.

Driving Dynamics – The Duster and Terrano outshine the EcoSport when it comes to driving dynamics. The EcoSport isn’t your typical Ford and thus doesn’t handle like a train on rails but the Duster and Terrano do. Both these 4.3-metre cars have absolutely zilch body roll which make them very eager around the tightest of corners. Even the steering feedback on the Terrano and Duster is superior than the EcoSport but the only drawback is the vibrations which creep through the steering while cornering on bad roads. The EcoSport is fun but the Terrano and Duster are simply better when it comes to outright handling and steering precision. 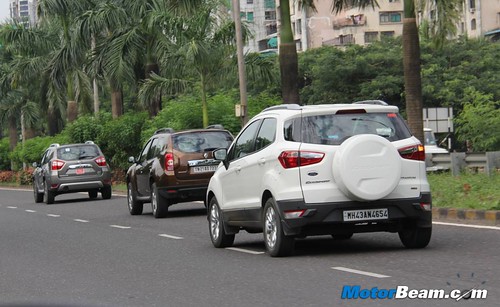 All the three cars offer good NVH levels but the EcoSport is slightly better but the tyre noise is more audible in this sub 4-metre vehicle. The Terrano and Duster are also the better riding cars here and gobble up potholes with applaud worthy confidence. No matter how bad the road is, the Duster and Terrano don’t unsettle the passengers, while the EcoSport does feel a bit harsh. Braking performance is equally matched, the EcoSport has a better pedal bite but its front heavy and that makes it nose dive under heavy braking. No such feeling is felt in either the Terrano or the Duster and Dacia needs to be appreciated for the fantastic chassis balance. 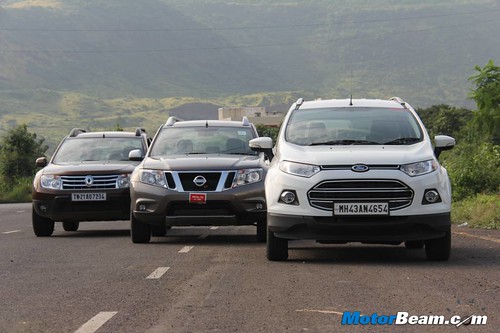 Verdict – Seems like a tough choice deciding between these highly capable compact SUVs. While none will take you off-road, each will make your journey extremely comfortable in the city with their compact dimensions, small turning radius and frugal powertrains. Undeniably the Renault Duster and Nissan Terrano are the bigger cars here, offering more interior room, better driving dynamics and fantastic ride quality. The EcoSport comes with more features, offers better engines and even after the recent price hike, is simply outstanding value for money. While Renault sold 50,000 units of the Duster after 10 months of launch, Ford has managed to get 50,000 bookings in just 3 months which shows how important value for money is in our country. Not to forget Ford has a bigger dealership network and although Nissan has more outlets than Renault, the latter has better after sales support.

The Terrano brings only styling updates to the table which makes the Duster look a bit old. But when Renault bring the facelifted Duster to our shores, the advantage being enjoyed by Nissan will be reduced. In their current form, the Terrano is the more appealing car but the premium is simply not justified. The difference between some variants between both cars is more than a lakh and that’s what finally tilts the verdict in the Duster’s favour. But when it comes to the overall winner amongst these three cars, the Ford EcoSport still remains on top, offering more equipment for around Rs. 2 lakhs less and that’s a deal very difficult to dismiss.

The Nissan Terrano is a more appealing package but when it comes to pricing, the Renault Duster offers the same performance with more features at a lesser price. The EcoSport outruns both when it comes to bang for your buck and thus emerges as the winner in this compact SUV battle.