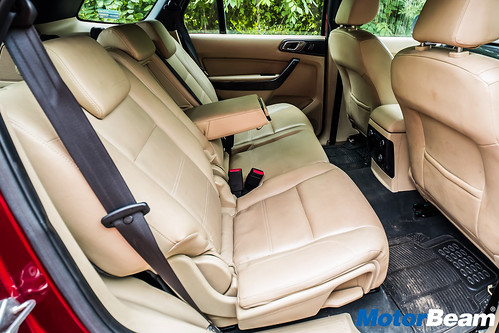 The middle row of seats has ample legroom and headroom and even though the Endeavour is a 7-seater, the third row is best suited for kids. Mind you, there is no way to mount a child seat here, so you have to get small children seated in the middle row. If an adult has to sit in the last row, it is rather cramped. The electric seat folding option is pretty snazzy. The front seats are the best place to be in the cabin. It is best to use it mostly as a 5-seater with occasional 7-seater capability. Boot space is simply phenomenal and you can literally take your home with you. NVH levels deserve a special mention here. Active Noise Cancellation technology used here really ensures high levels of cabin quietness. 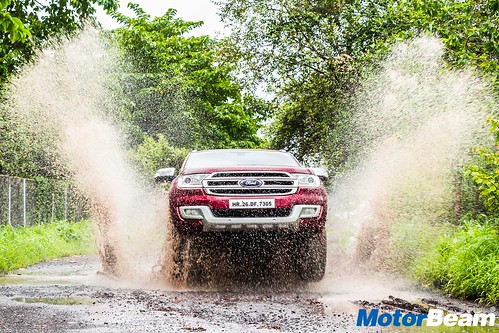 The high ground clearance and large tyres are very useful

The 2.2-litre TDCI mill has enough grunt for day-to-day driving

Our 2.2 Endeavour is basically cut out for urban use. If you are into regular off-tarmac driving, the 3.2-litre is the one you need as it comes with a full time 4WD. We were however very content with what we had as our daily run was in the city. The high ground clearance and the perfect approach and departure angles meant that even with the 4×2, we could easily wade through standing water and the deepest potholes. Monsoon means mayhem for the city of Mumbai and even on the days when it was flooded and the city was on standstill, the Endeavour made through it quite easily. 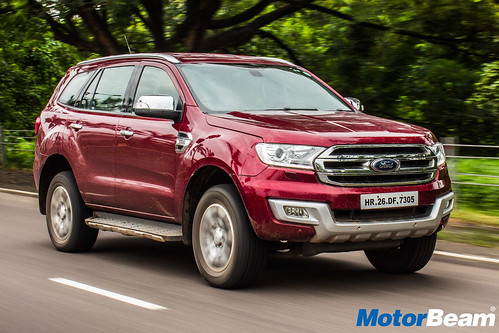 The gearbox is a bit slow but smooth in its operations

The 6-speed automatic transmission on the Endeavour is quite an evolution from the 5-speed which the previous generation model got. Both the 2.2 and 3.2 variants get the same gearbox which even has the same gear ratios. There is plenty of grunt from the 2.2-litre diesel motor but we did find the gearbox to be a bit sluggish, especially on downshifts and when you have to accelerate with urgency. The Endeavour clocked an under 13 second time to 100 km/hr, which is pretty positive from something which weighs north of 2200 kgs.

Royal Enfield is on a product offensive for next 3-4 years. New Royal Enfield model to launch every quarter. Yes you heard that right. The   END_OF_DOCUMENT_TOKEN_TO_BE_REPLACED