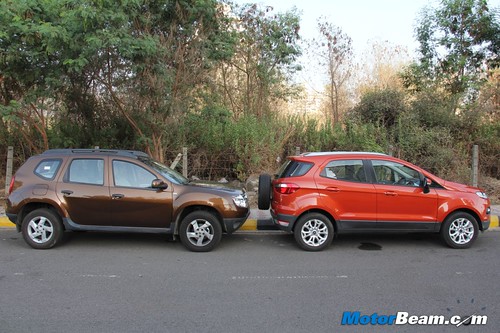 It’s that time of the month when your inbox is full with press releases about last month’s sales. Both Ford and Renault have sent our releases although the French automaker is a bit more detailed, giving out the exact units of each car they sold in India. Ford has recorded its best ever sales in India, selling 12,338 units (4471 exports and 7867 domestic). Obviously a major chunk of those sales come from the recently launched EcoSport and the American automaker sold 4715 units of the compact SUV last month.

While the Ford EcoSport is now commanding a waiting period of up to 9 months, the Duster is available of the shelf. This year’s lowest sales for the Duster was in July 2013, 3089 units. Renault has been constantly selling around 5000 units of its compact SUV but the EcoSport seems to have stolen the limelight. A 31.7% drop in sales (Renault sold 4523 units of the Duster in June) seems quite a lot but we expect the high waiting period on the EcoSport to help the French automaker as people find it difficult to wait for long periods of time.

Even selling 3000 units of the Duster is good enough for Renault since the volumes in this segment are not as high as in the hatchback or MPV space. However with the Nissan Terrano arriving soon, it is bound to eat into the Duster’s sales, which could result in sales dropping below the 2000 units mark. Ford has received more than 30,000 bookings for the EcoSport in a matter of just a few days. We are shocked to see the company starting exports of the vehicle, as the priority should be to quench local demand first.

Ford recently started shipments of the EcoSport to Aruba, Mexico and South Africa. Renault also exports the Duster from India but the company only started export operations a good 6 months after the India launch, helping them to better serve local demand.

Ford EcoSport US Exports To Be Done From India