As we move along with time, the era of 150cc street-fighter motorcycles has now moved on to the 200cc category

Hero MotoCorp was the first to get something in the 200-300cc segment, it was the Karizma and it made quite a buzz back then. But since the update after the ZMR, people have been more focused on the commuter offerings from the world’s largest 2-wheeler manufacturer. After a long wait, Hero MotoCorp finally enters the street-fighter 200cc segment with the Xtreme 200R. I rode this motorcycle a few months back on the Buddh International Circuit and was desperate to ride it on the road. Last week I got the motorcycle for a few days and couldn’t help myself to put it right into a comparison test with the TVS Apache 200.

Motor Quest: The Xtreme 200R is a brand new motorcycle which takes a lot of cues from the younger Xtreme Sports. The TVS Apache 200 4V got a Race Edition 2.0 update this year which includes a lot of changes. New graphics all over, an introduction of slipper-clutch and finally the bike is shipping with dual-channel ABS. 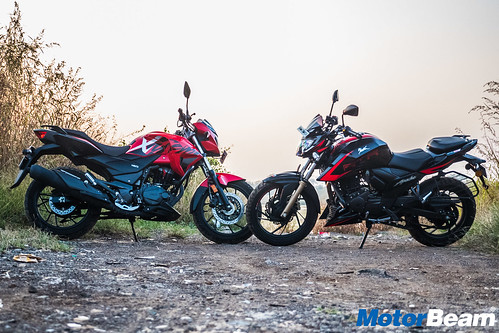 Styling – With the race edition update, the Apache 200 looks more flashy with the gloss black colour scheme and red graphics. It looks sharp and sleek while still being fresh. The Hero Xtreme 200R looks muscular and bulky as compared to the Apache 200. Beefy tank shrouds and the healthy body design from the front to the rear give it a fresh appeal too. The Xtreme also gets a similar colour scheme, however, there is more of red than black and the bikes look contrasting to each other. Both the motorcycles have a similar design for the 10-spoke alloy wheels, however, the Xtreme gets a thicker front tyre. The Apache 200 gets a sleeker double-barrel exhaust which goes very well with the design against the stubby exhaust on the Xtreme 200R. Both the bikes get LEDs but only on the tail-light. 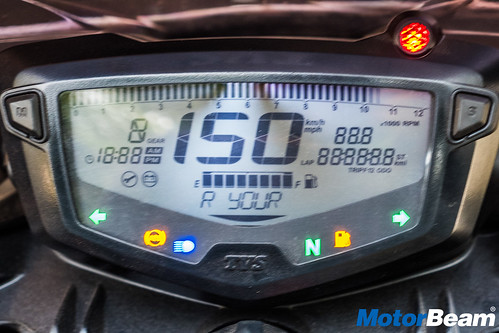 Instrument Cluster and Switchgear – The instrument cluster on the Apache 200 is a complete digital unit, however, the ABS tell-tale light has some functions now. It still looks fresh and displays a lot of information to the rider like trip details, top-speed recorder, lap timer, 0-60 km/hr timer and even a clock. The digital tachometer looks good and the shift-light is placed right where the redline starts. The instrument cluster looks modern unlike the one on the Xtreme 200R. 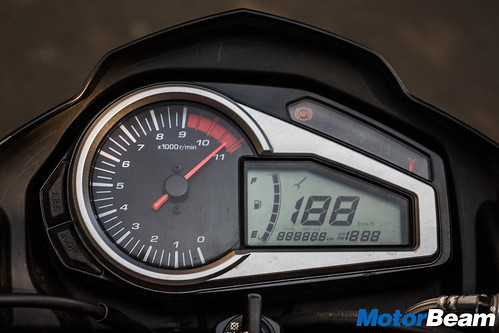 A wide analogue-digital cluster does duty on the Xtreme 200R

The instrument cluster on the Xtreme 200R has been lifted from the Xtreme Sports with slight changes to it. It is huge as compared to the one on the Apache and the analogue-digital combination has started to look slightly old. The display also misses out on a gear position indicator, shift light, 0-60 km/hr timer and a top speed recorder. The switchgear quality on the Xtreme is decent and it gets a choke on the left. While the switchgear quality on the Apache feels slightly better as it has a better finish too. 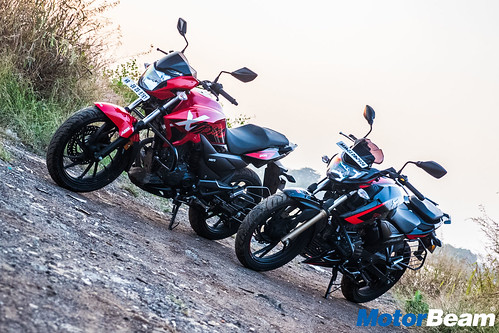 Ergonomics – Both the Apache 200 and the Xtreme 200R have a very similar seat height. However, the seating posture is different on both the bikes. Shorter riders are more comfortable on the Apache while they have to sit slightly leaned in due to the clip-ons. Taller riders, on the other hand, will prefer the Xtreme’s seating posture as they would sit more upright due to the handlebar. Pillion comfort on the Apache is also much better than the Xtreme but the rider and pillion have more space to move around on the Xtreme. The seat cushioning is just perfect on the Apache while one would need to get used to the softer but indifferent cushioning on the Xtreme 200R.