Quarter-litre Japanese motorcycles have been in the market for quite some time but KTM has dominated this segment in India. Finally, after a long wait, all the quarter-litre motorcycles now get ABS and we pit Yamaha against its classic rival Kawasaki. Well, this fight has been going on for quite some time but due to the localisation of the Ninja 300 and changes in the R3, the battle now seems fresh. So which one of these fully-faired quarter-litre Japanese motorcycles win the battle? Who would you spend your money on?

Motor Quest: The Yamaha R3 was re-launched at the 2018 Auto Expo with a list of updates. Introduction of ABS was the major one while BS4 compliant engine and new stickier Metzelers completed the list. Kawasaki, on the other hand, had different plans as they launched the Ninja 300 with a crazy price drop. Localisation of parts, a new set of tyres from MRF and ABS led to the change. While Kawasaki also introduced a new colour scheme with different graphics for the update. 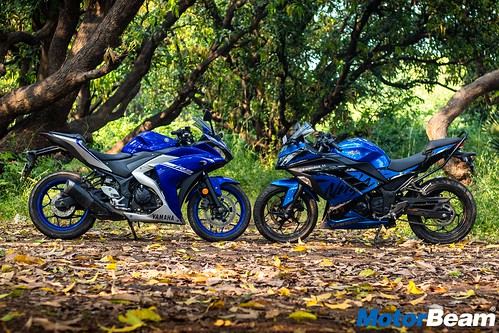 Styling – One will be able to notice that not much has changed on the design front. The Ninja 300 continues with the same styling since the last 5 years but gets new graphics. It also gets a new colour scheme and yet it looks attractive. It is the same case with the Yamaha R3, as it has had the same styling elements and design from the time it was launched. However, if you notice in detail, the blue colour is now darker and resembles the shade from Yamaha’s MotoGP bikes. Both the bikes have started to show their age, however, the 2019 Yamaha R3 has been unveiled and looks promising. But it will take another year to make its way to India. While for the Ninja 300, the elder Ninja 400 is here with a fresh styling that goes along with new Ninja line-up. 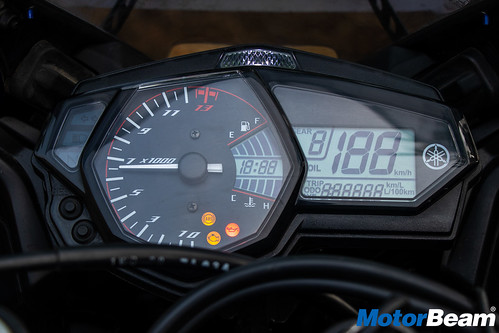 The instrument cluster on the Yamaha R3 looks very neat

Instrument Cluster and Switchgear – The instrument cluster on the Yamaha R3 is an analogue-digital unit. It is the same unit we had seen on the earlier motorcycle, however, this one houses an extra tell-tale LED for the ABS. The design still looks fresh and it is very well integrated while it is easy to read. The analogue unit is the tachometer while everything else is included within the digital unit. Engine temperature, fuel gauge, clock, twin trip meters, odometer, speedometer, gear-position indicator and fuel consumption, all of these are included in the digital unit. It gets a shift light too which is positioned very well. The quality of the switchgear is also decent on the Yamaha R3. 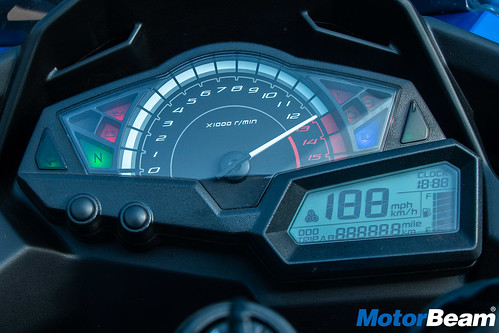 The instrument cluster on the Ninja 300 has had no changes at all. However, it looks colourful as compared to the one on the R3. It also gets an analogue-digital unit where the tachometer is analogue and rest of the details are included in the digital unit. Unlike the R3, the Ninja 300 has the digital unit in a separate section while the tell-tale lights make it very colourful. It displays all the information like the Yamaha R3 but misses out on a gear position indicator and engine temperature. The switchgear on the Kawasaki feels good too even though localisation has had a slight effect on the quality. 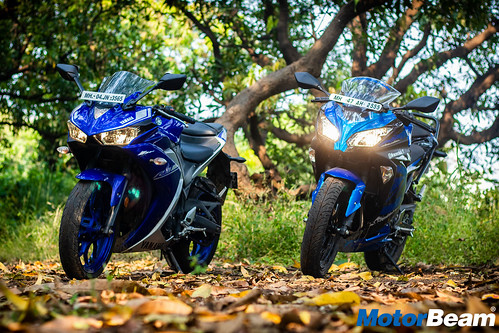 Ergonomics – Both the Japanese rivals have a similar riding posture, comfortable and slightly leaned in. But the Kawasaki Ninja 300 feels smaller as the overall dimensions are lesser than the Yamaha R3. Both the bikes have an accessible seat height but the Ninja is 5 mm taller making the Yamaha easy to get on to. On the other hand, the ground clearance of the Yamaha R3 is better than the Ninja 300. The larger 17-litre fuel tank is more useful on the Ninja than the 14-litre tank on the R3. Pillion comfort on both the bikes isn’t the best but the Ninja gets an out-of-the-box grab rail, giving something to hold onto for the pillion on the Ninja. The Ninja 300 also gets better rearview mirrors as you can see what’s behind. It’s a difficult case on the R3 if you have a jacket on.