The BMW 7-Series is in its sixth generation and the German automaker is heavily focussed on petrol engines for the G12 model as there are 3 petrol engines on offer against just a single diesel, the 730Ld. The 740Li is the base petrol among higher performing gasoline mills like the 750Li (4.4L V8 – 450 HP) and 760Li (6.6L V12 – 600 HP) but where the former most has the advantage is price as it is the only petrol variant of the 7-Series that is locally assembled via the CKD route, it also costs exactly the same as the 730Ld M Sport.

MotorQuest: The 7-Series is BMW’s flagship car and is available in standard (G11) and long wheelbase (G12) versions, the latter most is only sold in India. It was launched in India at the 2016 Auto Expo. 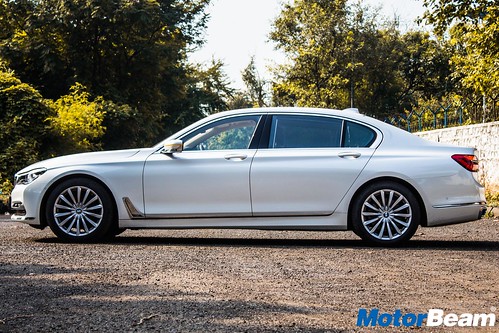 Chrome in plenty on the DPE trim, the M Sport looks better though

Exteriors – The 740Li is only available in Design Pure Excellence (DPE) Signature trim while the 730Ld is available in 3 variants – Eminence (the entry-level 7-Series model for India which costs Rs. 15 lakhs less). There is no M Sport variant for the 740Li which is available on all other engines of the limousine (except the 760Li which is available in xDrive trim). Thus, the 7-Series doesn’t have sporty bits but makes do with a lot of chrome for that premium appeal. The design is elegant, the car is huge with a length of more than 5.2-metres and the 19-inch multi-spoke alloy wheels look particularly elegant. 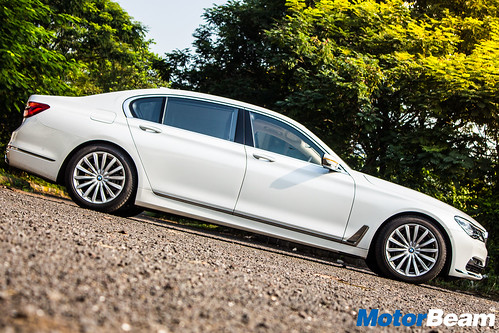 Familiar design elements in the family, the 7 looks like a bigger 5

The real attention to detail on this generation of the BMW 7-Series is in the lights. The headlights get a blue tinge and have BMW LaserLight engraved on the sides while the tail-lights have BMW engraved on the outer corner. Chrome might be in excess here but is tasteful nonetheless with everything from the front to the side and the rear having chrome lines. A massive hood, the signature kidney grille and a design which looks all too familiar to the new 5-Series might make you mistake the 7-Series for the lesser model but once you glance at the massive 3.2-metres plus wheelbase, you know this is BMW’s flagship sedan. 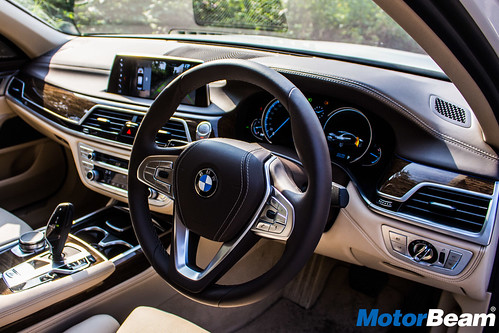 Interiors – There is crazy amount of attention to detail inside the cabin, open the large doors and you see ‘Carbon Core’ badging on the inside of the b-pillars. Step inside and there is just plenty of leather, brushed metal and wood. The seats are supremely comfortable and save for the co-passenger seat, all get multiple adjustments and also a 3-level massage with multiple types. However, all seats get heated and cooled functions, ironically both can work at the same time. All controls are in easy reach and the latest iDrive system works flawlessly although we weren’t impressed by the Samsung tab which is used to control the various settings of the car, including sun-blinds, seat functions and ambient lighting, the software is just too laggy. 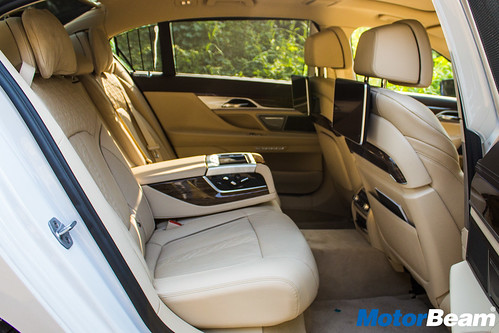 The rear seat offers plenty of space with the bed mode folding the front co-passenger seat and also opening a footrest, even a 6 footer can stretch comfortably here. Loaded to the gills with equipment like soft touch door close, fantastic sounding Harman Kardon audio system (the car also gets wireless Apple CarPlay which works with WiFi but if you are connected via Bluetooth, it continuously sends pop ups on your phone asking you to connect to WiFi, quite irritating), 360 degree cameras which smartly show you different views to give you a realistic position of the car, front and rear panoramic Sky Lounge roofs, two car perfumes, ambient lightning and of course the touch remote which also let’s you drive the car with it. The boot is decent sized and gets a powered boot-lid, a feature missing in the Mercedes S-Class.