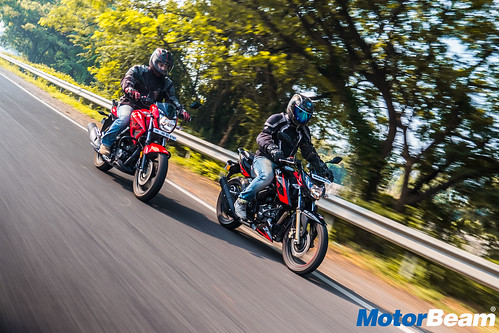 The Apache 200 has a better low-end and top-end

Performance – If we check the numbers, the Apache 200 has more performance to offer than the Xtreme 200R and when put to test, it is just the case we expect. The Xtreme 200R, however being 2.5 BHP and 1 Nm less than the Apache 200, has a very strong mid-range. From 4000 to 7000 RPM, the throttle is very responsive and the engine feels very lively. However, the Apache has a great mid-range too but when compared to the Xtreme, the 4-valves of the Apache give it a better low-end and top-end punch. The Xtreme runs out of breath very quickly while it hits the ton in 14.76 seconds which is 1.5 seconds slower than the Apache 200. TVS has an advantage with the oil cooler too as the Hero here is air-cooled and does not have much to offer. But the refinement levels on the Xtreme 200R are unmatched even with the latest Apache 200 being extremely refined. 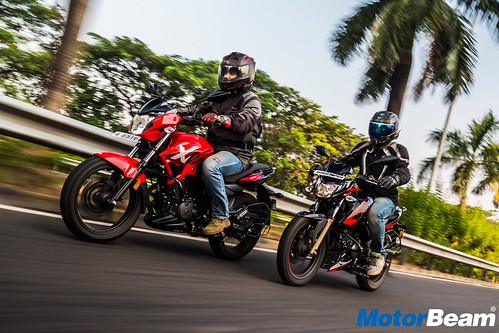 Xtreme’s engine has great mid-range and is very refined

Both bikes have a throaty exhaust, yet the Apache sounds better than the Xtreme due to the dual-barrel exhaust 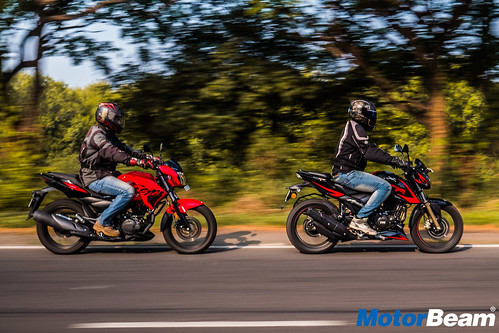 The Apache 200 has better straight line stability than the Xtreme

Riding Dynamics – The different ergonomics of both the bikes matter a lot as these 200cc motorcycles are suitable for different kind of riders too. The Xtreme 200R comes with a Diamond frame and this allows a good amount of space for the rider to get around the motorcycle. While the Syncro Stiff chassis of the Apache 200 makes it very suitable for corners and gives it a decent straight-line stability too. However, if you are any taller than 6 feet, you won’t find a comfortable spot on the Apache. Here, the Xtreme 200R comes into play as taller riders can lock their knees to the tank. They can find a comfortable spot, although it might not be as confidence inspiring as the Apache. 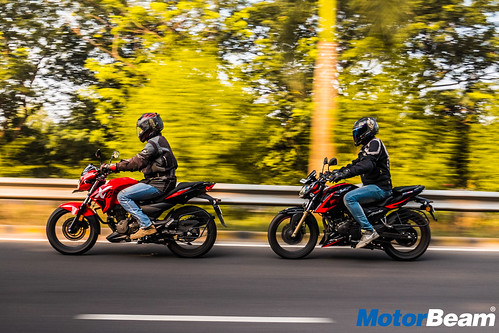 The Xtreme 200R is more suited for taller riders

The Apache 200 get only Remora tyres with the ABS variant while the Xtreme 200R gets only MRFs. Both the tyres provide decent grip and enough confidence in the wet as well as dry. The front tyre on the Xtreme is, however, thicker than the Apache while both have the same size rear tyre. The Xtreme, however, manages to be more manoeuvrable in traffic too as the Apache has a larger turning radius. The brakes on the Apache have better feel and feedback than the Xtreme 200R. The Apache also gets a dual-channel ABS while the Xtreme gets only a single-channel ABS. However, the Apache has better mirrors so even with a jacket on, the rider can see what’s behind. 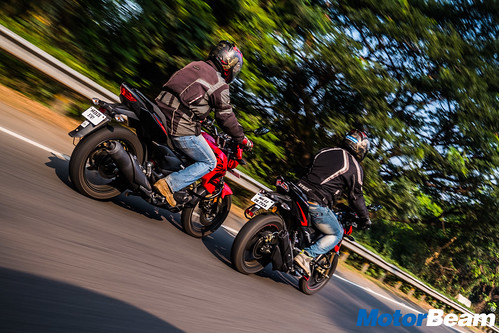 Verdict – The price difference between the top-of-the-line Apache 200 and the Xtreme 200R is almost Rs. 25,000/-. For that extra money, you get a lot of tech and hardware on the Apache. However, if you are a tall person, finding the Apache comfortable would be very difficult. The Xtreme is very suitable for all kind of riders and it portrays to be a very simple motorcycle. It trumps over almost all the 150-160cc Japanese street-fighter motorcycles. While it also becomes the easiest way to upgrade to the 200cc segment. Although, the Apache 200 isn’t the latest motorcycle but with the tech and styling, it is a very fresh motorcycle while the Xtreme 200R is the latest addition to the 200cc category and it is the most accessible 200cc motorcycle in the market right. 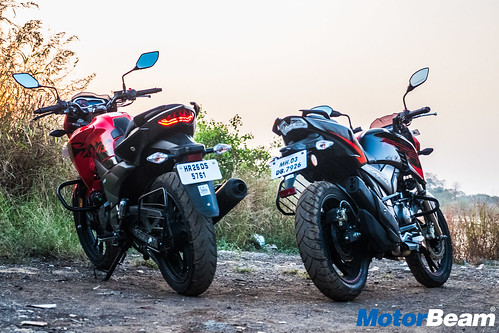 “The Hero Xtreme 200R might not be strong on paper, just like the TVS Apache 200 which seems lacking on the spec sheet but both these motorcycles offer decent performance and good practicality. Choosing one depends on how you look at it. Looking for a 200cc bike? Close your eyes and go for the Apache 200. Looking to buy a premium 160cc Japanese motorcycle, stretch a bit and get the Xtreme 200R which does commuter duties better than the lesser capacity bikes.” – Faisal Khan, Editor, MotorBeam.

Royal Enfield is on a product offensive for next 3-4 years. New Royal Enfield model to launch every quarter. Yes you heard that right. The   END_OF_DOCUMENT_TOKEN_TO_BE_REPLACED