The Honda Civic is completely new, looks dope and is the better handler but the Skoda Octavia does so many things better!

D-Segment sedans were all the rage before the advent of SUVs. They were stylish, had powerful engines, feature-rich interiors and there was that sense of prestige that came with owning one. The two sedans that stood out in this race were the Skoda Octavia and Honda Civic. The first-gen Octavia was immensely popular for its fast performance, good handling and sheer value for money. In the first few years of the Civic’s launch, the sales were through the roof. In its best year, Honda was selling a staggering 2500 cars a month! Buyers were taken over by Civic’s futuristic exterior and interior, smooth and effortless engine, fluid handling and the Honda badge.

Now, the segment is shrinking with the average sells below the 1000 mark. There is so little demand for the D-segment sedans that most brands have put an end to their production. Volkswagen announced that there will not be a new Jetta for the Indian market and very recently Toyota announced that they won’t launch the next Corolla in India. Amidst the low demand, Skoda is soldering on with the refreshed Octavia and Honda has re-entered the segment with the 10th generation Civic. Can the Civic be a worthy rival to the Octavia and how much of the essence can the two cars bring back to the segment? Let’s hit the road to find out.

Motor Quest: The Octavia began Skoda’s chapter in the Indian market when the car hit our shores in 2002. The car quickly gained popularity, thanks to punchy engines, solid build, luxury-car-like features and good value. the second generation of the Octavia came in 2007 and for the Indian market, it was christened as the ‘Laura’. The Laura stood its ground despite many rival brands competing in the segment. The current Octavia, in its third generation, has had a relatively successful run as it is one of the better-selling cars in the segment. The Civic was less lucky. The increased competition, high price, lack of a diesel engine and growing popularity of SUVs towards the end of the Civic’s lifecycle meant that Honda had pulled the plug in 2013. Since then, Honda concentrated on other products. To turn things around, the automaker has decided to give the Civic a second shot and this time the car has a diesel engine along with all the typical Civic characteristics. 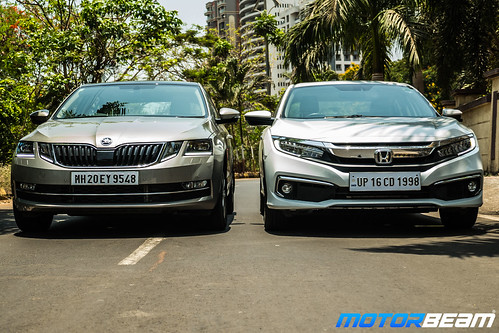 The Civic does look fresher out of the two

Exteriors – Honda impressed the audience with the Civic when they introduced it here in 2007. The car had a futuristic stance which made it look more expensive than what it actually was. The new Civic, as we are happy to report, looks just as striking as we’d hope it would. The front is all aggressive with a giant strip of chrome on the grille, all LED headlamps and attractive bumpers with chrome-lined fog-lamp housings. The bonnet also tapers down giving it a sporty stance. The long bonnet only amplifies the feeling. From the side, the Civic maintains an athletic profile. There are numerous lines on the body but they are all at the right places, meaning it hardly looks overdone. The prominent bulge atop the front wheel arch creates an impression of the Civic being lower than its actual ride height. There is a continuous line that runs from the front door to the tail light and a crease on the doors. We also like how the car ‘comes down’ from the rear to the front. This design philosophy makes the Civic looks like its moving even when it’s not. 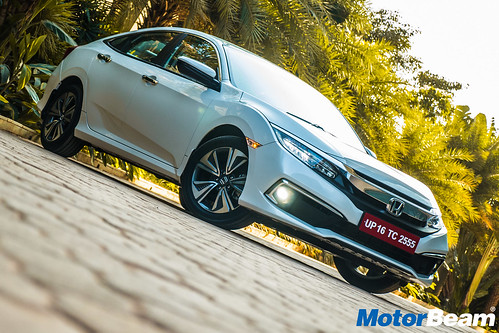 The fastback profile is unique in this segment and it is beautifully executed on the Civic. Some fastback designed cars tend to look awkward but the Civic does not. The sloping roofline adds oodles of sporting character and the boot does not look stubby. In fact with the boomerang tail lights, the rear looks quite attractive. We like small details like the chrome surrounds for the windows and those intricate alloy wheels. To sum it up, the Civic brings a breath of fresh air in this segment with its attractive styling. 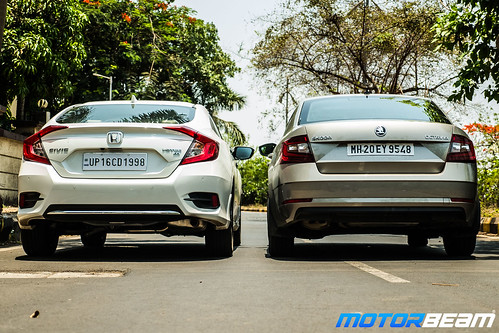 The Civic looks funky while the Octy looks understated

The Octavia ends up looking a bit too conventional in front of the Civic with straight lines and a traditional sedan silhouette. The Octavia does not look bland but it won’t be as distinguished as the Civic in a parking lot. The Octavia received a cosmetic update in 2017 and the most noticeable change is the split headlight. We don’t know why Skoda decided to do that but it is an interesting touch and reminds you of the previous generation Mercedes-Benz E-Class. The rest of the design is similar to what you’ll find in most Skodas. You get the large black grille with the Skoda logo on the bonnet and straight bumper design with a pair of square fog lights housed into them. The only detail that stands out is the raised area behind the Skoda logo on the bonnet. 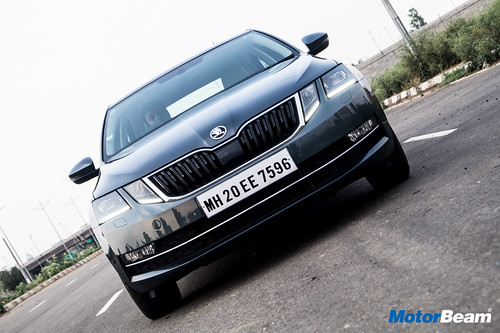 Despite being a bit old, the Octavia’s design has aged well

The side profile is squarish and nowhere as dramatic looking as the Civic. But for many people, this may be an advantage. Because there is no interplay of lines, the Octavia looks clean from the side. The windows are big making the cabin feel airy and the roofline is more consistent than the Civic meaning the headroom for the backseat passengers won’t be an issue. The rear is as plain as the rest but the detailing of the tail lights is interesting. The alloy wheels on our Laurin & Klement model were well designed and there are badges on the fenders to let you know this is the top-spec car. 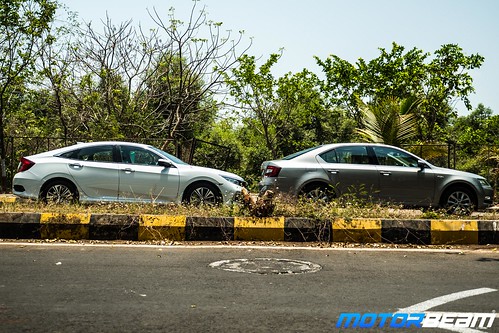 The Octavia’s boot is bigger and easy to access

The interesting takeaway with both the designs is that, whereas the Civic has a fastback design, the boot opens like in a conventional sedan and in the Octavia, which has a traditional design, the boot opens as a hatch. Since we are on the topic of the boot, at 590-litres, the trunk space in the Octavia is simply massive and the boot very well shaped. The loading lip is not high and the opening is very large (the hatch) resulting in convenient access. The Civic’s boot, at 430-litres is big enough to carry luggage and it is well shaped but obviously it is the Skoda’s boot in which it is easier to load luggage.