Honda X-Blade isn’t much different from the CB Hornet 160R, but the two aren’t the same either!

In a country greatly influenced by the total cost of ownership when it comes to vehicles, premium commuter motorcycle segment turns out to be a good compromise between sportiness and practicality. And, why not? This segment has products from all mass-market brands which offer an attractive mix of performance, fuel efficiency, comfort and affordability. Honda, for example, already had more than a couple of products in this segment but have added another one to their portfolio. Named the Honda X-Blade, the newcomer is targeted towards the youth with its striking appearance and a good number of features. Even though the X-Blade shares its underpinnings with the CB Hornet 160R, its lower power rating as compared to the latter puts it at a disadvantage, or does it? We find out through a road test whether the X-Blade, especially in the presence of other Honda products, makes a strong case for itself or not.

Motor Quest: Honda took wraps off the X-Blade at the 2018 Auto Expo held in February. Clearly, this motorcycle has been built to impress the Generation Z which is evident in the way it looks and the amount of features it has on offer. With the X-Blade, Honda now has three different products sharing the same engine priced literally at a stone’s throw from each other. While the X-Blade doesn’t hold much relevance in company of its stablemates, its introduction definitely shows that Honda wants volumes, by hook or by crook! 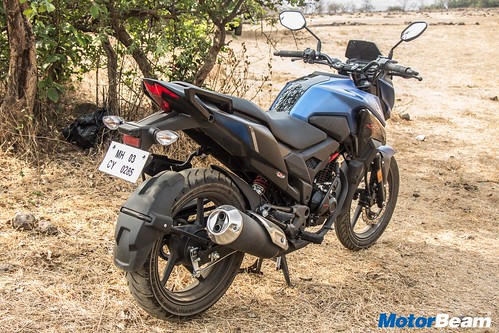 Going by Japanese design standards, this one is as radical as it gets!

Styling – First and foremost, let’s give it to Honda for designing such a distinctive-looking bike. Though the X-Blade is based on the CB Hornet, there are fewer similarities between the two and that is a good thing for a prospective buyer. Its out-of-the-box design is clearly a USP for the X-Blade. For starters, there is a Robo-Face LED headlamp with an LED DRL that seriously gives the bike some aggression and attitude. However, the effectiveness of this headlamp unit can be best termed as adequate. When compared to the Hornet, the X-Blade has an edge in terms of road presence because of its heavily sculpted fuel-tank with sleek tank shrouds, gorgeous-looking Razor-edged LED tail-lamp, split grab rails and twin-port exhaust. The motorcycle has been positioned below the CB Hornet in Honda’s lineup and hence you get conventional 5-spoke alloy wheels rather than 5-spoke split variety seen on the Hornet. To sum it up, the X-Blade still looks desirable and there is no doubt that it will attract more eyeballs than the Hornet. 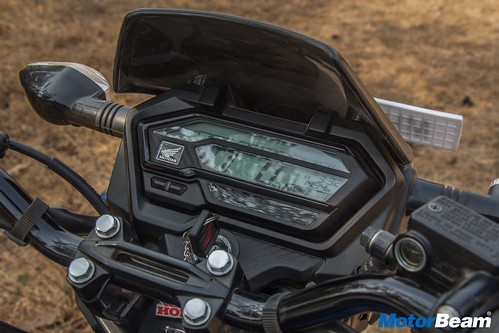 Instrument Cluster and Switchgear – Like all modern Hondas, the X-Blade too gets a fully digital instrument cluster which has been termed as Street-Tech Digital Meter by the manufacturer. Apart from the speedometer, odometer, time, fuel level indicator and tachometer, the console features twin trip meters, service due and gear position indicator as well. The tell-tale lights have been neatly placed below the instrument cluster and the switchgear quality is good enough. However, the display isn’t clutter-free largely because of the amount of data on offer. The right side handlebar features a hazard light switch and an electric start button while the left one gets switches for the horn, indicator and headlight beam. As with Honda’s other offerings in this price range, the kill switch has been given a miss. 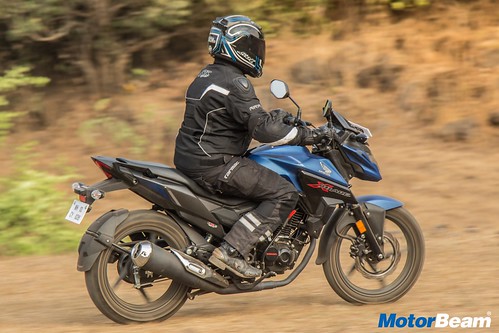 Ergonomics – Talking about ergonomics, the X-Blade is a fairly comfortable motorcycle as it has the essence of a commuter. This one gets a comfortable single-piece handlebar, which coupled with the slightly rear-set footpegs, allows for a sporty yet relaxed riding posture. In fact, the riding position is quite close to that of the CB Hornet 160R. Like the Hornet, the X-Blade also gets a single piece seat which is the best in its class. The rider seat is wide enough, roomy and will accommodate a person of any frame and the pillion seat is no different. The seat offers decent support but its cushioning is on the harder side. That said, the single-seat layout adds a lot of practicality to the package which a good number of prospective customers are going to appreciate.